It just occured to me while watching "Monuments Men" last night , that 70 years ago right about now, late July, my dad was working his way across Normandy as part of the allied advance. He was with the 18th anti tank battery. Luckily he wrote down some of his experiences from that time and can tell the story better in his own words than I can. Here is the latest segment of "Les Goff's WWII memories". 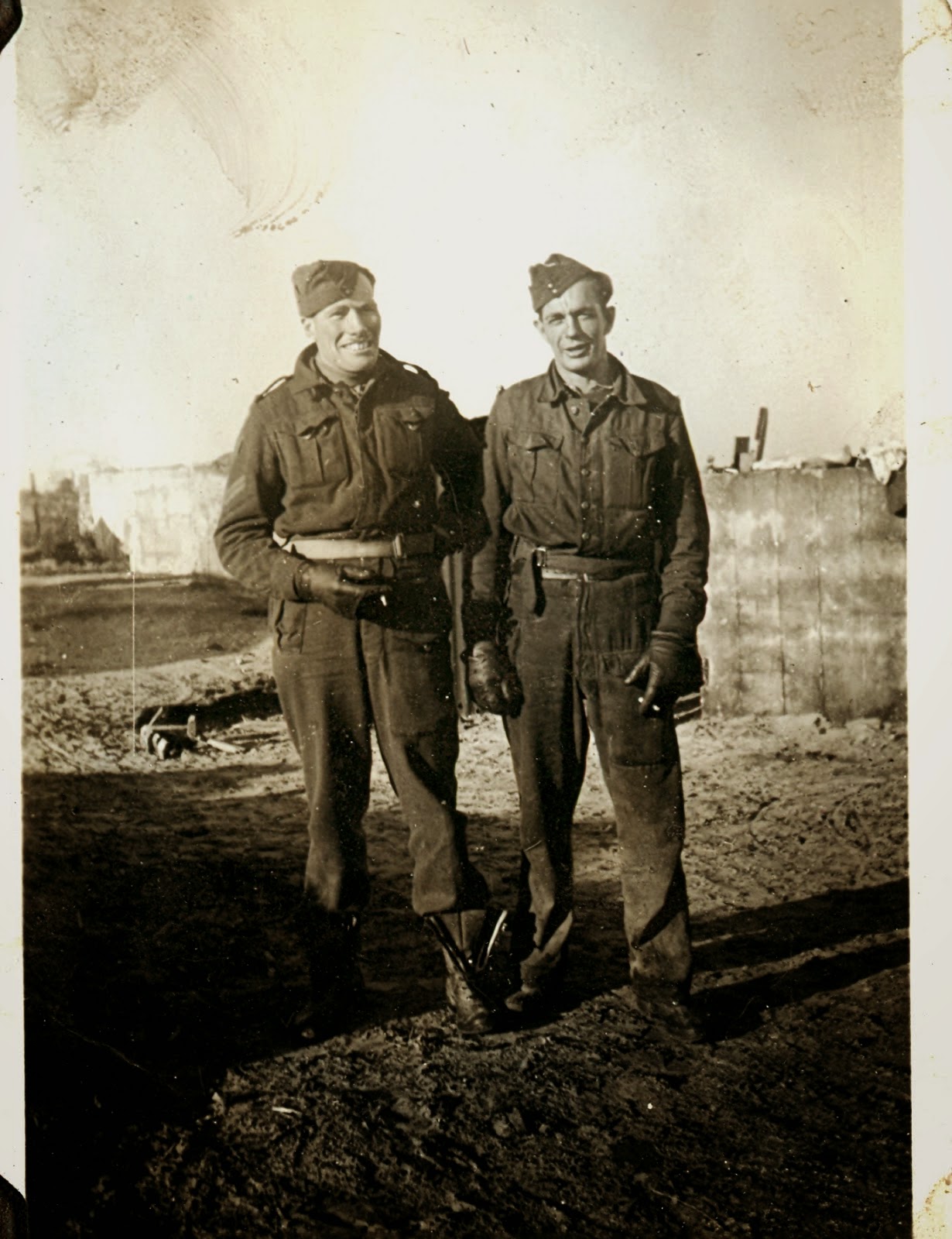 I've posted most of the other views of haying here so I guess it is only right to include the raking operation.

I used the old Super 90 Massey and the six wheel Pollard hay rake to turn two swaths into one on the weekend. It saves wear and tear on the round baler. Makes a better bale I think too. Not so much need to weave side to side on the swath to get the bale even. When it is one big swath coming in slowly it just rolls up nice and even. Plus I  don't need to drive so fast and shake the baler (and myself) up. Hayfields are notoriously rough here. I broke a hitch pin on the haybine yesterday after bouncing through a deep hole.
The old Perkins diesel works as good as it ever did before the head gasket failure but the mosquitos and grass pollen take the fun out of open air tractor driving. It was good to get back in the 2090 cab to bale.
The wheat is looking great as this photo from this morning will show. There are no great canola crops around but I am reasonably satisfied with mine (in the background of the photos) considering the year it has been. 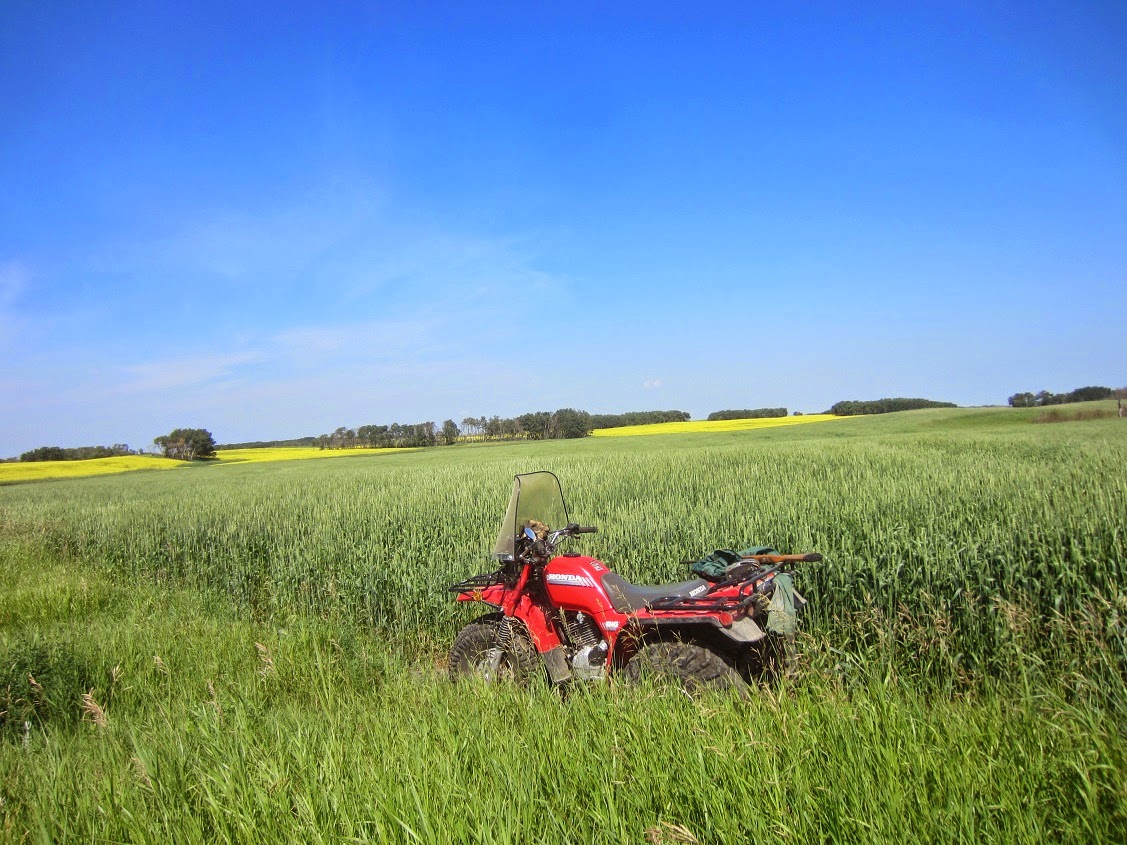 First new potatoes out of the ground today. A little later than some years but welcome whenever. Now I need to clean out the bin . Planted way too many last year it seems.
Posted by Ralph Goff at 11:25 AM No comments:

Baling and Blowing Things Up

What an unproductive day. I decided to get the Massey baler out to bale up the little bit of hay lying in the yard. It was actually about a half a round bale that had begun heating after sitting several days inside the baler and I unrolled yesterday to dry. Ok, I baled it way too damp on the weekend . With thunderstorms in the forecast I figured bale it up into a few small squares which I can always use. First off the only available in my fleet of tractors was the Cockshutt 40. I had to first remove the bale spear and three point hitch which took a little time and effort. Then hitching up to the baler the hitch jack did not want to fold. I soon found out the baler was sitting low due to a completely flat tire. Rather than work on it back behind the shed in the long mosquito infested grass and heat I risked slowly driving it to the shed doors. It took some effort but finally got the tubeless tire to seat and take air.
That hay was still plenty tough and it pushed the limits of the flywheel shear pin, right up to the breaking point. Now I get to spend some time inside the baler pickup unplugging the tough damp hay.
Eventually I got the hay put through with a grand total of 7 square bales. Not much to show for a day's work. Cleaning up the baler to put it back in it's parking place I noticed the stacker had low tires so I started filling them up with the air hose. Tire number two had a little surprise in store and went off, almost in my face with a big bang. The rusty little rim had split allowing all the air inside the tube to exit like a small stick of dynamite. Lucky the wheel was contained in a double fork assembly which prevented it from becoming flying shrapnel or I might not be here . 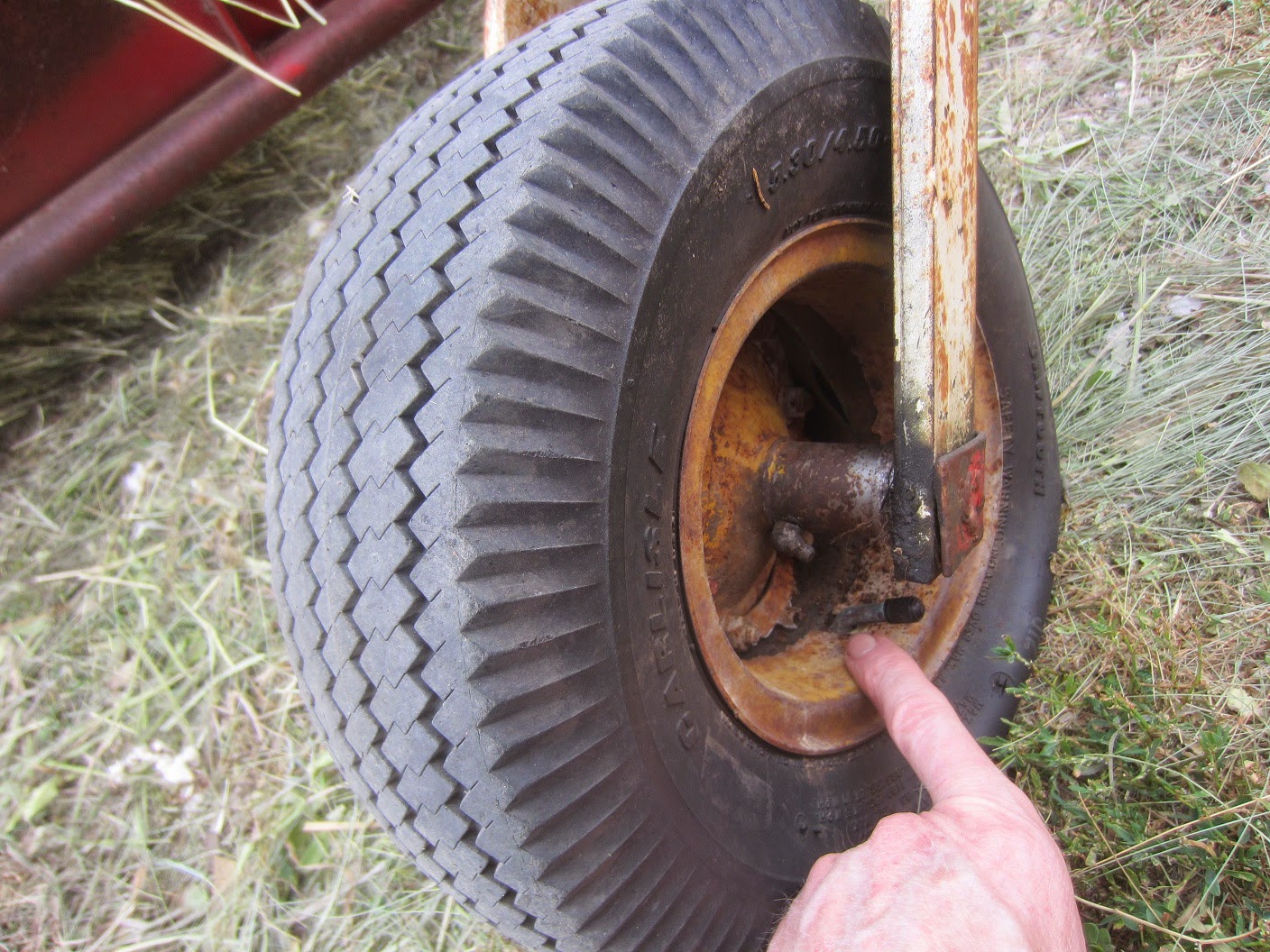 Got in a productive afternoon of cutting hay in the hundred acre woods and also on the hillsides of the next quarter. It went well until a knife guard broke late in the day. I was sort of prepared, having a spare in the toolbox. Unfortunately I did not have the right wrench to loosen the bolts. I finished up the patch I was working on anyway, leaving a narrow strip of uncut grass from the broken guard. I wasn't going to finish today anyway so now there will be a little more for tomorrow.

In other news, the IHC B110 truck has no rear brakes. I didn't think I was going to get the rear drums taken off to inspect as they require a special brake puller to remove. I got a little creative and came up with a crude but effective improvised adapter and was able to pull the drum off without too much trouble. Now the search for replacement wheel cylinders. Its only a 55 year old truck. Shouldn't be too hard to find parts.

Here is the adapter plate. Don't laugh too much.

Alf's Cabin, then and now

Cutting hay today and as the tractor bounced through the depression that marked Alf Goff's cellar under the log cabin I thought of this old photo. Taken in the 1930s by his sister, Kate Hobetzeder, Alf stands at the door of his log cabin. 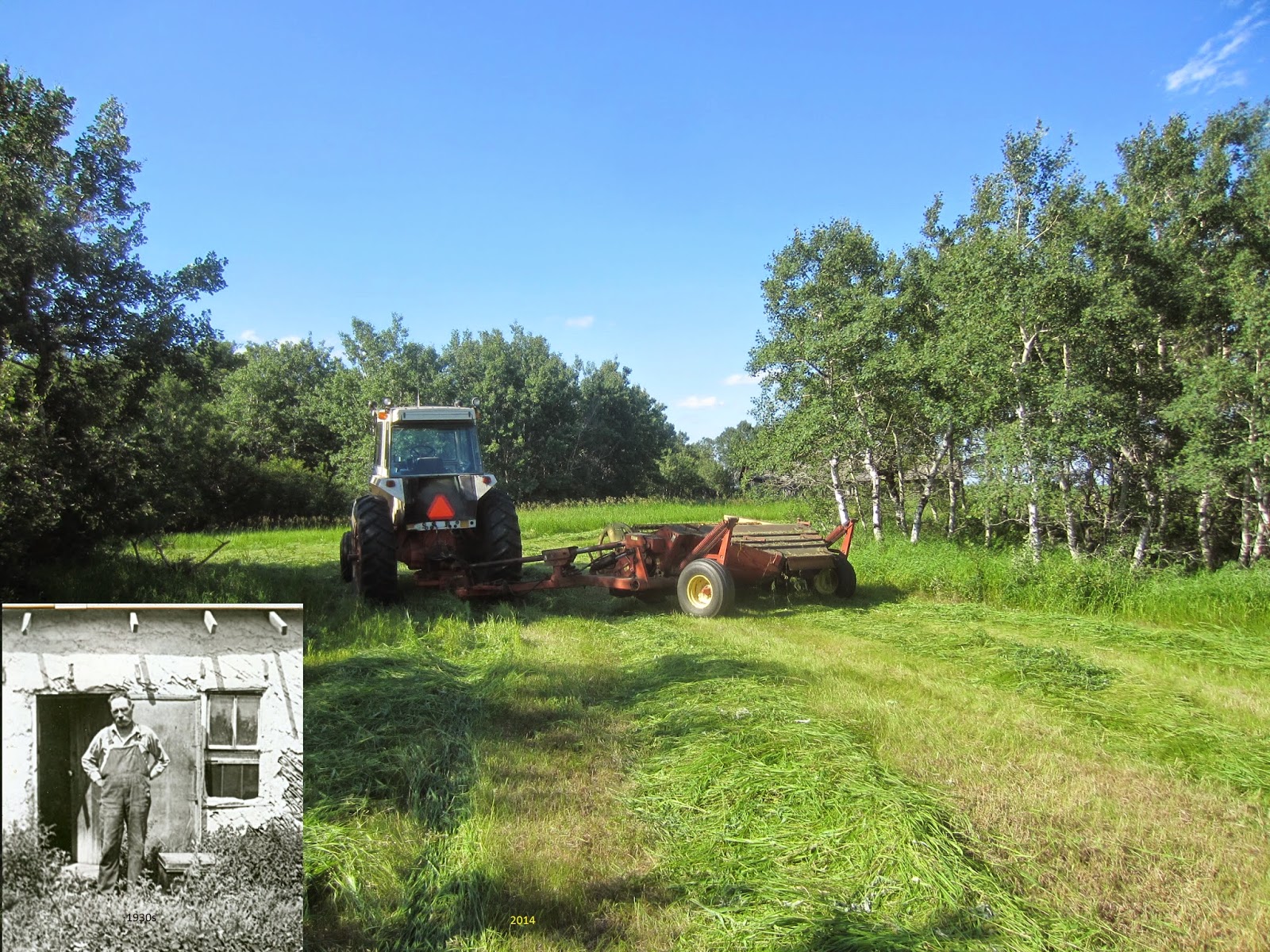 Sure was good to work in the cool and dust free cab watching all that grass pollen and mosquitos outside. Although I am feeling it a bit tonight. Is there more pollen than ever out there or am I just getting more sensitive to it?
Just finished spraying crops and chem fallow yesterday so now I can get at cutting hay. Late of course as everything is this year. Crops are surviving and some actually looking not too bad after all the excess rain. Although you'd have to drive a long way to see a good field of canola. Reports in today indicate there are at least two million acres of flooded crops in Southeast Sask. due to recent heavy rains.  According to what I read in  this news story maybe we are part of the problem?
Crop spraying was long, drawn out and stressful with more mud and water to drive through than I ever thought possible. I left some terrible ruts but never got stuck and the weeds are dying.
Spotted this moose cow and calf in one field of flax. 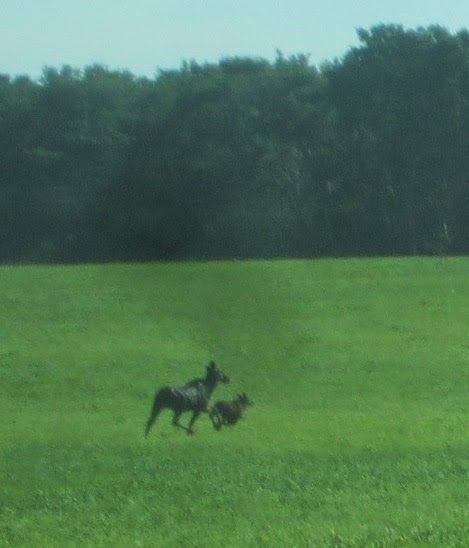