This month in history 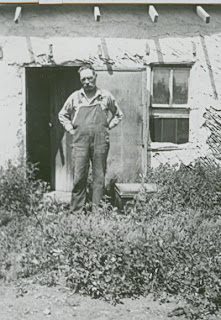 Just past a family history milestone here on Jan. 15. It marked the date of the funeral in 1942 for my Dad's Uncle Alf. He would have been 71 give or take a year or so. Just about 39 years earlier he had come to homestead in Sask. on this location with his brother and cousin.
Alf was born in Chetnole Dorset, U.K., the son of an agricultural labourer. In his early twenties he travelled by sailing ship to Queensland Australia. A voyage that took well over a month .Living conditions were not the greatest in Dorset at the time with little chance for improving your lot in life. Although why he went so far as Australia is not known. He did have a cousin living there at the time so this may have been a factor He worked on a sheep ranch near Graceville, Queensland for several years before returning to England. Then he and his brother Tom (my grandfather) sailed for Canada. Few details remain of this adventure but it is known that they worked on the railroad construction crews through the Canadian Rockies.
Continueing on their way south into the U.S. they worked on threshing crews eastward eventually arriving at New York harbour to return to England. This would have been in the early 1900s as by 1903, Alf, Tom, and cousin Jack all left Dorset again and sailed for Canada to homestead farms in what was at that time the Northwest Territories, later known as Saskatchewan.
The rest of his life Alf lived alone in his log cabin, never travelling any further than the 11 miles to the village of Lipton for his mail and other supplies. It must have been a quiet life especially in the winter. No tv, radio or telephone. Long cold nights with only the light of a coal oil lantern or the flames of poplar blocks burning in the wood stove. No sounds other than the howling of coyotes or the wind swaying the trees outside his log cabin.
This photo was taken of Alf in the early 1930s just in front of the door of his cabin.
Posted by Ralph Goff at 1:58 PM