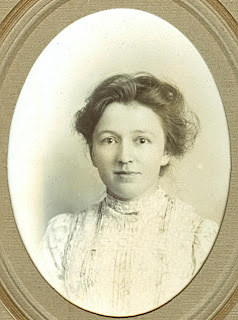 My grandmother's older sister, Annie Hall would have been 24 years old when she wrote this letter in October of 1906.
Annie had gone out to work in the town of Ipswich for the Turners. Not too many miles from her parents farm at Saxmundham.
The Herbert referred to in the letter is her fiancee and they would eventually marry in 1909 but that is another story for another
day.
9 St. Edmunds Road
Ipswich, Essex
Oct. 1st, 1906
My Dear Alice
As I have a little spare time I thought you might like to hear I have reached here in saftey. The young person in the train
conversed with me all the way so we had the carriage to ourselves all the way. She had been after a situation as cook
at Mrs. Frank Garret's. Her home was at Bury. She seemed rather lost at Ipswich station so I saw her right and then
went on my way rejoicing. It was half past one when I reached Ipswich as we stopped at every station with the exception
of Westerfield. You did not stop to see me out of sight. I hope you got home alright and did not feel lonely going back
because as Horrie says, " I will be back again one day".
Ethel had got a beef pudding to welcome me back. Then this afternoon she has been baking so I have been having tidbits.
The Turnerites have returned with rather ruffled tempers so we very thankfully saw them take their departure out to bridge.
I am by myself as usual as Ethel and Annie have gone out (to see if it is a nice evening I expect).
I found my letter awaiting me. Herbert's brother, Fred, is getting married at Christmas and I do not think there was any more
news in it that would interest you . When you think of coming to Ipswich again beware of the Aldeburgh train. I wish I could
have had a little longer stay with you. I hope Mother's lip is better, also her cold. I expect you will be going to the Harvest
Thanksgiving service at Saxmundham Church on Thursday. You must tell me all about it when you write.
I daresay you are gone to bed as it is just on ten so I shall have to post this in the morning. Now I do not think I have any
more to tell you this time, (only to be sure and not forget which corner the bicycles come around and that Annie has had
her photo taken, I hope she did not crack the glass). So will close with love to all and to yourself.
I remain your loving sister,
Annie
xxxxxxxxxxx
xxxxxxxxxxx
Posted by Ralph Goff at 8:18 PM