Grain Annex Move
Cold, frosty day here in Sask. Time to do a little more video transfer to digital before I head out to feed cattle. This video I taped February 28 of 2002 showing the biggest building move that I have ever seen. This grain annex was built about 1975 and saw a lot of grain put through before the elevator closed down. All the other grain elevators in town were demolished but this one was sold to a buyer about 3 towns west so a massive move was in order. It took a lot of skilful planning and time to get this huge building up on wheels and then moving without tipping over. Obviously winter time with it's frozen solid ground was an advantage for solid footing. They used an elaborate setup of hydraulic controlled wheels to maintain the level of the building while moving over uneven ground and it worked well.
At -3 degrees F it was cold for man and machinery as you can see by the heavy exhaust clouds from all the vehicles. I did most of my taping from inside my vehicle with the heater running. They parked the annex for the night as it was too late to head out on the highway at 5:00 pm this time of year. 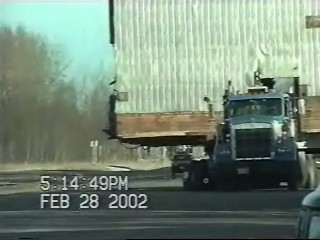 Stay tuned. Day two of the move is in the works.
Posted by Ralph Goff at 1:04 PM