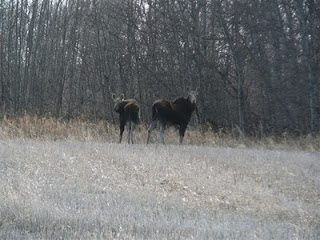 A couple of ungulates. Ok, they are better known as moose but I've always wanted a chance to use that term to describe hoofed mammals. I was inspecting some of my fields on a sunny April afternoon and spotted 2 figures that were too big to be deer and there were no cattle in the area. There have always been reports of sightings of moose in the area but never by me, until today. This appeared to be a cow with a calf from last year judging by their sizes. There is plenty of wild land for them to roam on over there and hopefully they won't trample down too much of the crop this summer.
It was a good weekend for people in the roofing repair business. Wild and crazy winds wreaked havoc on shingles and metal roofing and siding Friday and Saturday. Streets are littered with bits of broken shingles and tree branches. No precpitation to go with it although there was snow in the north. What little benefit that might have been was mostly cancelled out by the fact that the wind blew most of it off the fields into fence lines and hedges. Some fields in the west are so dry at this point that farmers are not planning to seed them as there would be insufficient moisture to germinate. It could all change in the next day or so. Thats the nature of farming. We are at the mercy of nature.
Posted by Ralph Goff at 12:45 PM