A Week of Progress and a lucky accident

Its been a pretty progressive week. The CIH magnum tractor is back in service thanks to my sister in law driving for parts and my brother's help assembling them. I sprayed the oats which is a nice looking crop and not bad for weeds. Also got my flax sprayed yesterday in near perfect conditions. Not too hot or windy and everything worked, even the A.C. The canola is showing first blossoms, guess it won't get the second application of glyphosate now. Really it is not bad for weeds so should be fine.
Got the rest of the summerfallow worked and looking good (for now).
Just for a test I hitched the old Cockshutt 40 onto the new (to me) haybine and cut some of the grass around the yard and driveway. It is old and faded but cuts grass like crazy and will be a big improvement over the old sickle mower (or wearing out my swather trying to cut hay with it). 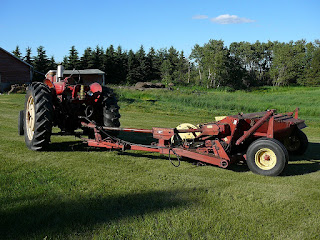 I shot this video Tuesday evening during a severe thunderstorm. Lucky we missed the tornados that were spotted in a few areas that day.
We had a day of hurricane  force winds on Wednesday, Shingles were lifting and sheet metal on a shed roof was threatening to lift. Probably not smart but I got up on the aluminum ladder and put few screws in to hold the sheets down, although I was in danger of becoming a human kite at times. 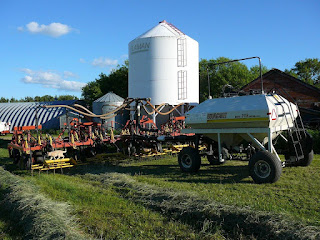 The lucky accident? No, not falling off a roof but nearly crashing my air seeder into a grain auger and hopper bin. I had just moved the air seeder into the centre of the yard so I could cut the grass where it had been parked. Slight downhill slope but seemed fine when I unhitched it. About five minutes later I came out of the quonset to find the air seeder parked up against the side of the hopper bin and nearly on top of a grain auger. Within inches of crashing into the legs of the hopper bin or running over (and crushing) the grain auger tube. That could have been a multiple disaster that would have ruined my good day.
Posted by Ralph Goff at 8:40 PM