I Have Brakes (And I Have Rats)

So its a good news/bad news kind of post today. All those new brake parts on the 52 Mercury are gradually falling into place. Not finished but yesterday was such a nice day I had to take it out for a test drive. Sure enough, by pumping the brake pedal I could build up pressure enough to slow down and stop the car. Only the front wheels. The line to the rear axle was blocked and refused to let brake fluid through. It did finally break through after I re-parked in the shed. So, thats one more small step forwards. 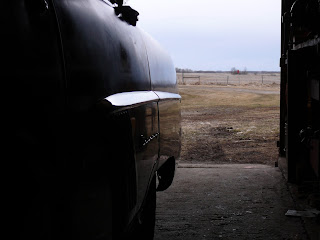 On the down side, I thought I had squirrels in the chop bin all winter. In fact I did see one several times. But their revolting cousins, the rats, were the real culprits. Setting up a trail cam in the bin for a night showed up numerous pictures of rats in their nocturnal antics running up and down the walls. I should have known. I don't know if the 3 lazy tom cats living in the barn have caught any.
Poison bait blue blocks are out for them. As well as three Victor weasel traps. Yes you can catch a rat in a weasel trap. Also got a conibear muskrat trap set which, although it was sprung several times, failed to catch anything. The Victors remain untouched for several nights. I'm looking forward to regaining my rat-free status but its going to take a while. 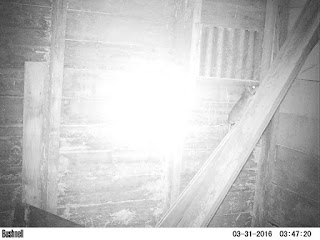