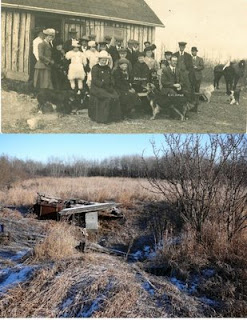 100 years apart, approximately. Thats about how much time is between these two photos.The home of my mother's uncle Arthur Nevard. I took the lower, colour photo today, November 27, 2008. The early black and white was taken in the early days of the 1900s, not long after the house had been built judging by the bare, unplastered poplar logs. Since there were no churches nearby, an Anglican service had been held in Arthur's homeon the day this photo was taken. It must have been a full house with all those people packed into the little log cabin. Today only a depression in the ground marks where the cellar was. The rusty kitchen stove beside the remnants of the brick chimney, the collapsed log walls laying nearby. 97 years ago today my grandparents were married in that little log house.
Posted by Ralph Goff at 8:20 PM 1 comment:

Les Goff’s WW II Memories
July 6, 1944, 2nd Canadian Anti Tank Regiment of the 2nd infantry division left Tilbury Docks at London, England bound for France. We arrived on a beach near the town of Bayeux, Normandy where we were able to disembark without having to wade or drive through water which we were grateful for. However our trucks and towers were water proofed up to a point, possibly 3 or 4 feet of water. We arrived without incident
We had 17 pounder anti-tank guns which were towed by either Ford or Chevy towers carrying six to seven men. All kit, 40 rounds of 17 pounder ammo, five thousand rounds of 303, also each man carried a rifle. One bren machine gun per gun crew. A number of grenades , two mortars and various other pieces of equipment. So we were rather squeezed in. The ammo and packs were carried on the roof of the tower which was built for that purpose.
On going ashore there was plenty of evidence that there had been a lot of shelling. There were a lot of knocked out tanks and I regret to say that they were mostly Shermans which fell victim to the deadly German 88 mm. It was a very capable and versatile artillery gun which we would soon learn was better than anything we had and we better respect it. However the 17 pounder proved to be a good gun and came close to matching the 88's power.
We spent our first day and night somewhere in the vicinity between Bayeux and Caen, just out of range of the firing which we could hear. We were very concerned about where , when and what our next move would be. We did not have to wait long. Towards evening of the second day we were informed that we would be moving into position after dark taking over from the British 51 Division which was coming out for a rest. Our officer informed us it was pretty grim up there. That remark was very sobering. I realized later that he was not exaggerating. So, come darkness we started our move to the front. There are no lights, no cigarettes, just slowly moving with officer beside driver to show the route, a narrow dirt road. As much as I could see it was a fair amount of trees and hedges alongside the road. All went well for awhile when suddenly there was a burst of machine gun fire that sounded very close. We came to a very sudden stop. Our officer ordered everybody out. We piled out double quick, rifle in hand and hit the ditch. After laying there for 2 or 3 minutes all was quiet so Armstrong, our officer says quietly,"Unhook the gun, we have come too far, turn around and head back a ways.".........................
Posted by Ralph Goff at 9:57 PM 2 comments: