What Is Killing Our Trees?

Its a serious question. Most everywhere I look lately the trees are dead. Just bare sticks standing, or laying down. Like the bare bones of a long dead skeleton. Maybe the decade of extreme wet years we had killed some. Others I just don't know. A lot of my evergreens have dried out and dead lower branches that I have cut off. Needles all over the ground as the higher ones dry out and fall. Some are dead right to the top and only waiting to fall in the next big wind.

Cutting dead poplars off where they have fallen on the fences is a yearly task. All summer and fall. The past few years have been very dry so maybe that killed some.

Disease? Herbicide drift? I look back on photos I took ten years ago and marvel at the thick impenetrable walls of poplar bushes all over the farm. Now, a lot of dead sticks that are going to fall. I miss them. Will they grow back? Probably. Poplars are like a weed when you don't want them to grow. Hopefully soon. 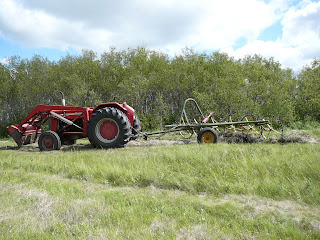 My Own "Firelog Channel"

Always looks a little funny seeing a channel on tv devoted to watching a fireplace burn but it seems to be popular with some. Not needed here though as I have my own outdoor channel. A stone's throw from the house where I have been piling dead wood all summer waiting til we have a little snow to make it safe to burn. Yesterday and today it worked well. Quiet with only the crackling fire and occasional squirrel scolding. Out in the sticks....as they say.
w
Posted by Ralph Goff at 12:27 PM 1 comment: 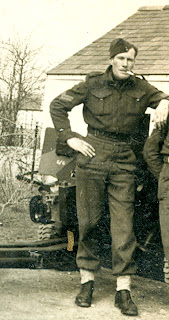 Now, to get back to our move and my first experience at driving a gun tower partly loaded with men, arms, and a three ton gun behind. We started off in late afternoon, raining of course. Everything was going well until for some reason we had to take a dirt road which was pretty well ploughed up by the traffic and it was narrow and muddy with trees on each side resembling our fir trees. Darkness is coming on so this makes it hard to see with no lights. Just follow the gun ahead of you and that little red light in a funnel on the gun muzzle. After following this light for a while it becomes hard to tell how close or far you are from it. Our man in charge is Jimmy Erwin standing up on passenger side where there is a door opening in the roof for observation. Everything is going ok for a while . We are moving but slowly when suddenly there is a burst of machine gun fire which sounded pretty close. Jim starts to holler “everybody out” which we did with out hesitation with rifles and crouched beside our tower expecting more fire. Nothing happened. Suddenly I noticed our tower was starting to move. I had not applied the hand brake. I jumped in but it had gone toward the shallow ditch and there didn’t seem to be any return. As it seemed to have quietened down we unhitched the gun and I thought it wouldn’t be any trouble to drive out. I had it in four wheel drive but it just continued straight ahead and followed that ditch. Two wheels on the road , two in the ditch and it was real mud. We ran out the winch cable, tied on to a tree. I pulled out three trees before I managed to get free of that stubborn ditch. There were a lot of words said that I won’t repeat. After re-hooking the gun we went not so merrily on our way, but very cautious. After a while it got so dark that Jim walked ahead of me with a white rag. Jim had a loud voice which was good. He said, “Goff , if you hear me shout, stop”. We were traveling in a convoy made up of our battery. I do not know who was leading. It might have been some of the infantry, however, it was slow going on account of the darkness. The only light being the little red light in the gun muzzle.

We had not gone far when I hear Jim roaring for me to stop.

Stopping is quite common in a convoy. Especially at night.

There gets to be a sort of accordion effect . Sometimes we get

too close packed and have to space out a little. We continued

on for some time passing through a small village where we

stopped for a while. Our gun sergeants were shown where to

put each and every gun in a defensive position. Finally Jim

from where we are sitting waiting. The ground rises up to the

east of the village about two or three hundred yards ahead.

Our objective is to put our gun in position on the high ground.

proceeded to spot with Jim leading on foot. We could not hear

any shooting close by. There was a house near the top of the

ridge and a little further along a big heap of fagots, small

bundles of brush tied like a sheaf for heating. We decided to

camouflage the gun. Resting the gun muzzle on the ground,

making it look like a part of the heap. While we were busy

doing this there was a loud bang close by. Some one said that’s

grenades. Knowing Jerry was close by made us work as fast as

two men on the gun. Jim and I took the tower back down to

the village where it could be out of sight. Then back to the gun

digging more trenches as there was six men in all. We

the house to cover it. Four guys could squeeze into it. We threw

mortars. We scrounged some bedding from the house. Nice and comfortable. Its nice and quiet for a change. The spud

islander and myself go back to the gun to relieve our guard. We take our rifles and shovels.

The soil was quite sandy, easy

digging but also kept caving in . We decide to make it a little

deeper. We take turns digging. Its starting to rain so we find

some sticks in the pile of fagots, place them across the top,

place some more fagots over our heads leaving the center

open so as to be able to jump out.

crew. Its getting daylight and seems to be quiet for the time so

a bit to eat. That is when I notice quite a concentration of

Shermans behind us in the village. About this same time our

officer Dave Heaps came along in a jeep, stopped behind a

house and came running over to where we were. He had his

thirty eight drawn and looked quite concerned as if he

expected to find us in a grim situation. We assured him there

wasn’t much happening , however he decided to leave his jeep

in case we had to leave in a hurry. However, we were to learn a

little later that Dave had reason to be alarmed. There was

German infantry not more than a hundred yards away. Also our own infantry, the Essex Scottish were dug in on our right and

the Jerries on the left. This was something we didn’t know

we had made our way back to the gun again about noon. Still

raining, we settle into our trench again by the gun not

expecting much to happen when suddenly we are getting some

shelling all around. Not a heavy concentration so we try to see

where its coming from. We can not see much for fine rain. I

decide to keep our heads down. The spud is digging out more

sand when suddenly something cleans my little shelter from

over my head. It would seem to me that it was a dud as the

others were all High Explosive.

Some nice weather for this time of year inspired me to get the old 730 Case and dozer blade going and clear up some of the dead, water killed trees on the farm. No, not joining the club of land clearing, progressive farmers that seem to be everywhere else. I like my trees but all this dead wood looks bad and will eventually fall into the field around the edges causing problems.

The old Case is the tractor my uncle bought in 1964. I first got to drive it in the summer of 1970 and I guess I was pretty hard on it. A learning driver usually is. But it survived and now has a special parking spot in the shed out of the weather. Still up for any job I have for it. Clearing trees is dangerous for both man and machine but so far we are both ok. Second gear at idle speed. Slow and steady wins the race they say. I don't need to win, or even finish. I enjoy the work and thats all that matters. Steering is extremely heavy on the Case but it helps keep me warm later in the day when the temperatures drop..

A panoramic shot of the old Case parked for a rest. Hard to believe that is a creek bottom that is normally too wet to drive in. Its that dry this year.