Tough Grain In The Bin

Yes, I have some tough wheat in the bin now. I made an "executive decision" yesterday afternoon to combine wheat. For those not familiar with the term "tough", it refers to the moisture content of the grain. Wheat is considered dry at 14.5% moisture. Anything above that level and we will receive a discount on the already low selling price. Plus the grain is at risk of spoilage.  But when the days grow short as we reach September and heavy rain is in the forecast, sometimes we have to gamble. At least the cold temperatures were in my favor as cold grain stores safer than hot.
With the cloudy cold and still damp morning I had been prepared to leave the combine in the shed but when the sun came out about noon it inspired me to head out with the combine and try a sample. It went well but I could tell the moisture content was up just by the way the grain piled in the hopper. Short trip home for a moisture test confirmed my suspicions. 17.1% moisture. Still, after two days of inactivity from the last rain I wasn't going to give up that 4 remaining hours of sunshine and wind knowing what tomorrow's forecast held (rain). Every rain fall robs us of quality, weight and price at this stage of the game. A quick change over of the grain auger to the aeration bin so I can blow a little air through the tough grain and I was rolling again. My ever faithful truck driver showed shortly to take the grain away and I commenced serious harvesting. Slow going in the heavy, lodged crop areas and the old 466 was surging up and down in rpm as heavy slugs of straw hit the rotor. Carefully avoiding flooded areas with only a few scary incidents of wheel slip I was able to work well after sundown. In fact I had serious hopes of finishing the field if I could stay awake til midnight (or more). Optimism and hope were dashed though as I rolled up to the truck to unload and heavy mist hit the windshield about 10:30.
It varies from one region to the next and hard to find an up to date online harvest progress report but the last I heard Sask. is well behind normal progress for this date. Somewhere in the 50% complete range. Good to hear. I am about 51% done. 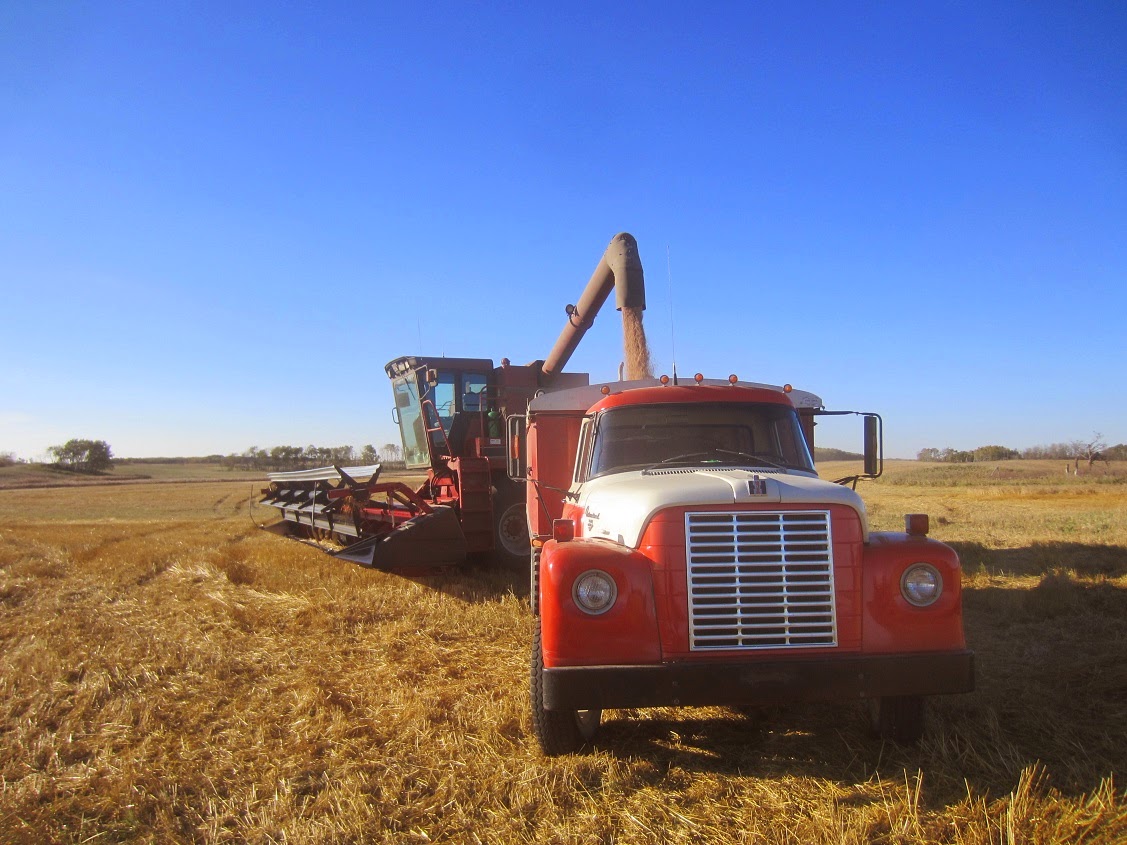 That is what we have had most of the week so I have been harvesting every day. Not a bad crop. Hottest day of the summer happened this week. Grain yield is good, quality fair. The wheat is terribly dusty and I am surprised my truck driver has not walked out on the job yet.  Fields not as bad for mud as 2010 but still interesting at times It is never good to see mud on the tires of a combine but that 1660 Case IH never fails to impress me just how much mud it will go through without getting stuck. Beaver dam(age) is incredible on one field with some crop flooded and inaccessible. I would sit there 24/7 with a shotgun to get rid of them if I had the time but obviously not possible.
No major breakdowns yet, except for the 300 dollar gear box on the grain auger last week. Obviously working  with a 26 year old combine and 43 year old grain truck it is only a matter of time til the next breakdown.
Cloud and damp this morning so it does not look good to get back in the field today.  I hope I am not sounding too negative and complaining but if you want a more positive and cheerful view you might like to check out The Lazy Farmer
Great fall scenery here this past week. 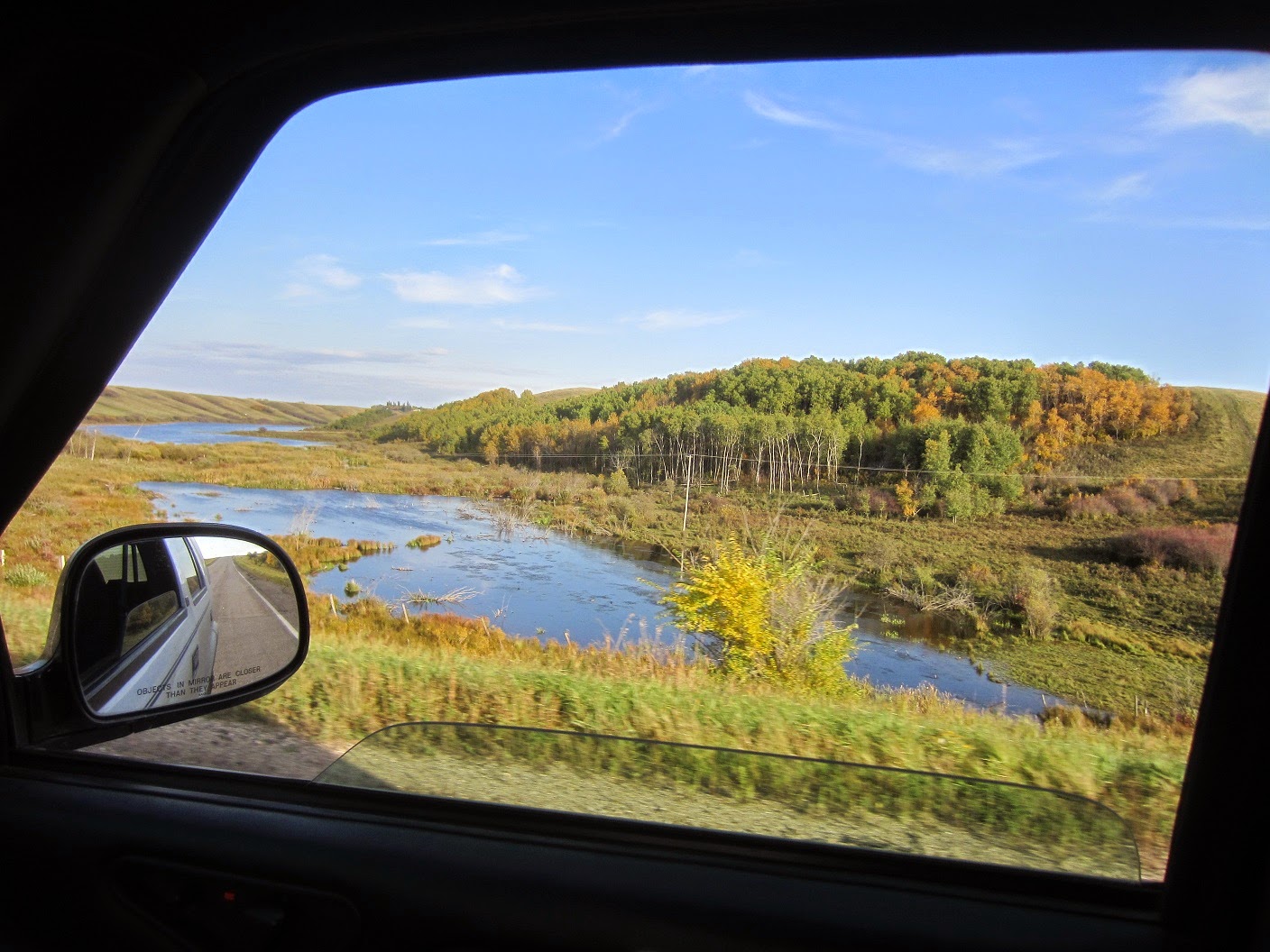 Not too far though. The old flathead still does not run on all 8 cylinders all the time.  The old Ford is pretty cantankerous about starting at times too when it gets warmed up. Probably a weak ignition coil. Of course the optional one gallon fuel tank would not allow for long drives either. Plus that whole having no brakes thing. So the half mile driveway will suffice for now. Sometimes I feel like "Toad of Toad Hall" messing about with old cars and trucks when I should be working. With the dismal cold and wet forecast for the coming week I wanted to get some video of the car in action this morning on what might be the last sunny day for a week.
I see John Dillinger liked Fords too. Interesting story.
Meanwhile the lazy farmer is out standing in his field with an overheating tractor and day time temperatures of 90 degrees.