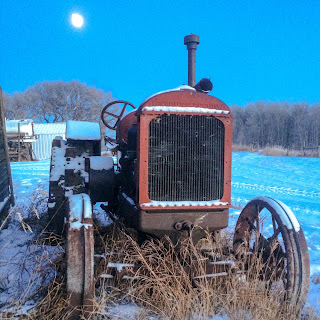 The term "polar vortex" is back in our weather reports lately.
Anybody that has watched much on youtube videos will know the popularity of "cold start" videos. Often comprised of some smart guy going out in the extreme cold to try and start an engine that has not been pre-heated. Not a thought given to the permanent damage being done to the engine. I won't be doing that to any of mine unless it is a matter of life and death.
Today was not that serious but I had not had my mail for over a week and needed a few groceries. Long weekend starting so today was the last chance til next Tuesday. After a failed attempt yesterday on the "new" truck (97 Blazer) I figured it would go today after being plugged in to both coolant heater and battery charger on the new battery all night. But no. Seems to be something else going on  as it would turn over ok but not start. I still had time to plug in the old 81 for a few hours and give it a try. Not too surprising that it started as it has a 30 year history of dependable starting and performance for me. After a night of -37 everything was stiff and cold. I warmed up the vinyl winter front in the house so it would be flexible enough to install. Even so, the cold air stiffened it to the point I could not get all the snap fasteners locked on. Good enough to work though and it made the old engine run warm as summer. Daytime high of -22F here so its been the coldest day yet. Its been a week of below normal temps after 3 weeks of above normal. Always keeping it interesting.

Continuing the clean up using steel wool and diesel fuel to remove the 60 odd years of lichen, rust and other accumulation on the trunk lid of the 53 Mercury. I'm taking advantage of the unseasonably mild weather as today is supposed to be the last nice day until next March.

Its almost exactly 3 years ago I started working on the 52. It had much worse floor rust than this 53 so I'm fairly confident I can repair this one. Not up to show standards of course but good enough that my feet won't hit the ground when I sit in the drivers seat.

Got the 52 Merc out for a few pictures beside the "new" 53 Merc. Weather forecast indicates colder weather coming in the next couple of days. Maybe snow too so I wanted to get the 53 indoors where working conditions can be a little more conducive to working without heavy mitts on. Above normal temps the past week (just above freezing) made it comfortable working.  I'm pretty enthusiastic about working on these cars but when I start to freeze up I tend to lose a little of that enthusiasm. These cars are so similar that to the average person they appear alike.  After spending almost the past 3 years working on the 52 I can pick out quite a few differences between them. Useless information to most but I'm right into that kind of stuff lately.

Some video of the clean up I had to do on the new 53 Merc "parts car". Lots of junk in the trunk and a few surprises too.

When dad used to drive us to town as kids and we'd go shopping in Harold Seel's grocery store, one of the popular items to spend our allowance on was a ten cent box of "Lucky Elephant" popcorn. The prize inside was as big an attraction as the popcorn. Imagine my surprise when I opened the glove compartment on this car and found a box inside. Empty of course. And surprisingly not chewed up by mice or squirrels after all these years. 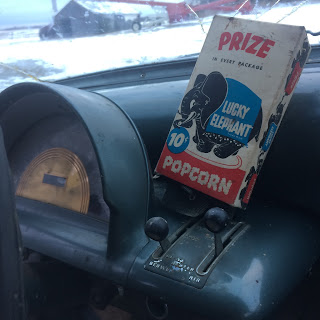 Posted by Ralph Goff at 9:28 PM No comments:

Well I am tired but happy. Hard work worrying. Ever since I started dealing on this Merc a week ago I have been obsessing over how I can't believe my luck and its too good to be true. And will it ever make it to my yard safe. It all worked out with only minor complications.

And a big shout out to Baillie Boys Towing for going the extra mile and delivering this old beauty all the way safe.

Sunset Pics and Getting Stuck

Stuck in the ditch in the snow again. Same truck, same driveway almost a year apart. Last year trying to fly the new drone and drive the truck backwards on a narrow driveway. Big surprise when I slid into the ditch. This time I just mis-judged the edge of the driveway on a slight curve. No drone involved this time. I didn't have to walk a mile this time either. Never did get the sunset pictures so I had to settle for some video shot while driving the tractor.

Posted by Ralph Goff at 9:20 PM No comments:

The sun was shining out of a clear blue sky on the snow so I figured take a short flight with the drone for some pictures and video. It was only about +8F but as long as I was out of the wind it was not too bad. Thumbs were getting pretty cold by the time I brought the drone down but otherwise everything worked well. The cattle still don't like it. They start heading out soon as they hear the buzz of the propellers.
Like most movies, this took a whole lot longer to edit and upload than it did to shoot. The internet was so slow yesterday evening that after an hour the video was only at 1% uploaded to youtube so I gave up on it. This evening speed was back to normal.

One Thing Leads to Another

Brake problems on the Blazer. I knew the front rotors were needing work. Pulsating brake pedals are never a good sign. But lately the rear brakes didn't seem to be doing much at all. So off with a wheel to inspect and I think it needs new wheel cylinders. In the process of cleaning up the accumulated dried mud from the past 20 years I discovered the gas tank was leaking. All that dried mud had  been slowing it down but once cleaned up it definitely did show leakage. It was quite a job getting the tank drained down to the point it did not leak any more. I think (hope) it still has enough in the tank to make it to the repair shop. Tank replacement is not a job I want to tackle in the winter time. Or the summer either really.
Naturally I recorded some of the highlights mostly for my own future reference.