Riding along with me in the John Deere 2360 swather while I swath oats. Or windrow if you prefer. They turned out pretty good considering what little rain we got this year. I still don't have the IH combine back together but then the crop is not ready to combine for a while either.

Too late in the day and too tired to do a serious blog so here is a video I just uploaded to youtube showing some of the details of the combine repair in progress. Its slow going but there is some hope it might be back together in time to do some harvesting this year.

I'm getting a little slack at keeping up with this blog but here is a short video of some of the stuff that keeps me busy. Its a job I've not been looking forward to. Would have been a lot nicer in the cooler weather too. Its turning into a bigger and more expensive job that I expected. Hoping to have it ready by harvest time but at this point I really don't know.

Although this is the second year in a row that I have not grown any flax, it has come back to haunt me. The latest damage flax straw has done showed up on my swather this week. While getting it ready to swath this year's canola I looked into fixing the oil leak from the "wobble box" knife drive that had kept me busy adding oil every day last harvest. On disassembly we found a tightly wrapped band of flax straw around the drive shaft against the oil seal which had damaged the seal causing it to leak. Almost unbelievable but it is just another episode in the trail of destruction caused by trying to harvest flax.
Just off the top of my head there was the time straw wrapped around the drive shaft of the tractor almost starting a fire. The time it wrapped around the truck drive shaft to the point that it tore off the hydraulic hoses for the lift. The time it wrapped around the return drive shaft of the John Deere combine causing a small fire we were lucky to catch in time. The time it wrapped on the rear beater shaft of the John Deere damaging the beater and the body of the combine. Not to mention the hours of torture I spent laying on the straw walkers sawing straw off the beater (Twice!). The straw chopper wraps that burned the drive belt. And thats just the John Deere, the one that I bought to replace the International that absolutely could not handle flax straw. The countless hours we spent cutting flax straw off the International I could not even guess at. The modifications tried in a vain effort to improve straw handling.
Yes, any fool can grow a crop but harvesting it is a whole new ball game and I'm out. 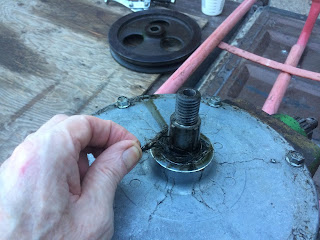