Breakfast time on the farm.


My cows and calves one day last week. Two slow learners would not have survived if I had not fed them by pail for the first few days of their lives. They seem fine now. After selling six head of older cattle last week the place is less crowded and more peaceful. No more bull fighting and bellowing which is nice. More room in the shelter for when the weather turns nasty. Plus I got a pretty good price for the ones I sold. Even the lumpy leg bull brought 80 cents a pound . And he weighed 1400 pounds.  Unless we get an absolute drought I should be ok for pasture this summer. Lots of leftover hay bales but hope I don't have to use them til next winter. This early spring is nice compared to last year but now this evening wet snow is falling. March might yet go out like the lion.
Posted by Ralph Goff at 10:45 PM 2 comments:

Am I a prepper? I never considered that I was but listening to this program on CBC's The Current this morning about "preppers" it seems I qualify on some counts. If you are not sure what a prepper is you may read a little about it here . A diverse group of individual who believe in being prepared for what they consider to be the end of the world as we know it are preparing for life after whatever apocalypse should arise.
It occurs to me that I have always lived that lifestyle to some extent. When you are a half hour drive from the nearest town/convenience store, it only makes sense to keep a freezer full of beef, chicken, pork and last year's frozen vegetables. My parents and grandparents view was that we can't waste expensive 50 cent a gallon gas driving to town every day for our food so we stock up. Flour, salt, sugar and whatever else is required is kept on hand ready for use.
And it only makes sense to have either a well or a few weeks/months supply of drinking water on hand. No city pipes supplying water this far out in the woods.
Of course without a source of alternate electricity, when the grid fails I guess all that food in the freezer will rot in a short time and I will be back to eating dry cat food and whole grain out of the bin.
At least I have a good supply of "beef on the hoof". 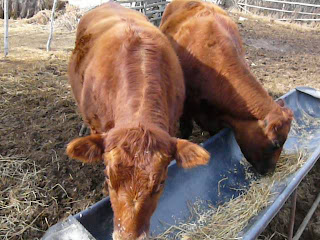 Email ThisBlogThis!Share to TwitterShare to FacebookShare to Pinterest
Labels: end of the world as we know it, preppers

Well, so far anyway. Raising cattle is mostly a walk in the park nowadays. With a haybine to cut the hay, baler to roll up big round bales handled by front end loader a lot of the old manual labour has disappeared. Pretty much stress-free. Except for one day. The day I have to round them up and load them on the cattle trailer. I hate that job. Its a lot of running around lugging heavy steel gates, pails of chop, square bales and all the other little incidentals necessary to pen up the ones chosen to be sold.

I don't have a trailer so have to depend on a good neighbour to haul the cattle to market.

We planned for today, late afternoon. Those cattle must be mind readers, they all disappeared by mid morning wandering off into the stubble field out of sight. Still too muddy in the fields even to walk I tried the trike. The big fat tires carried got me out there without getting stuck (barely), and located the cattle. Bulls more interested in fighting than coming home so I left them and hoped for the best.

They always come home for chop (oats) late in the afternoon so by 5:00, a little later than planned, I had most of them penned in the shelter. All except one two year old heifer which was still out in the field somewhere. With little difficulty I was able to separate out the ones I wanted to keep and release, leaving the calves and the fighting bulls in the pen. I kept them well supplied with chop and hay to keep them occupied and not fighting each other while waiting for the truck to show up.

They mostly loaded pretty easy but that big black two year old bull was getting a little ornery after a couple of unsuccessful attempts to get him through the loading chute. He had never been a problem before but if an animal this big decides to go somewhere and you are in the way, well things could get ugly. I managed to get in front of him with a pail of chop and lure him into the trailer slamming the door shut just in time.

Its a relief to see the trailer load leave the yard. Prices for cattle are great now and if we are facing a dry summer with poor pasture it will be good to have a few less cattle to worry about.
This little red cow and calf along with a few others will be staying. 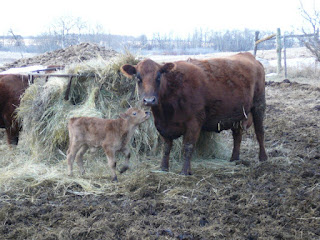 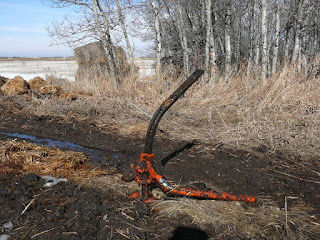 Yes, the good news is I found the jackall that I lost off the back of the tractor last fall. It was pretty much buried in the mud underneath the old rotting balestack I had been clearing up with tractor and blade.
Bad news.....as the photo shows, apparently I drove over it or something as it was severely bent sideways making it appear like scrap iron. But good news, I was able to straighten the beam and the handle (which broke and I had to weld) so I think it will be almost as good as new.
Our spring weather is another good/bad news scenario. Its always nice to see spring but this is almost a month early following a dry (sort of) winter. If the dry warm trend continues into the growing season we could see very little crop production. All the fertilizer and pesticide in the world will not produce a crop without rain. And this wild wind the past couple of days puts me in mind of The Wind Our Enemy
Also, this Viterra Grain Company Buyout , is it a good/bad thing for farmers? The main thing is that the stocks will show a profit and share holders will stay happy. If it also happens to benefit the farmers, that is only incidental I think.

Spring Time For The Lazy Farmer

As we are facing an early spring this year with almost record breaking temperatures here today it is time for a "Lazy Farmer" post regarding garden seeds. In my wildest dreams I might still be a month away from planting the first potatoes, in a normal spring. But the snowbanks have pretty much receded like the glaciers off my garden so who knows?
Forecasters already predict an impending heat wave/drought for the summer but of course that can change overnight. And their accuracy for the winter forecast was about as far off as possible so no need to hit the panic button yet. And now I leave you with another "Lazy Farmer" episode. 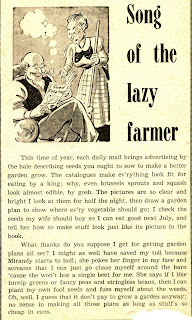 Cowfight at The Old Corral

On a nice spring morning here in Sask. my cattle were enjoying the weather. The little calf is about 3 weeks old now and doing good. Its the kind of day that makes keeping cattle worth all the trouble.
Posted by Ralph Goff at 11:43 AM 3 comments: 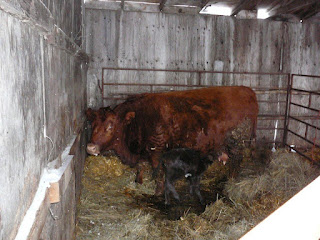 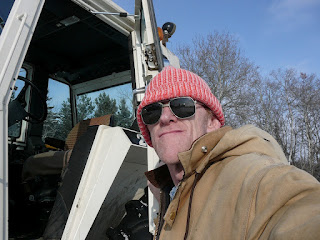 Yes, as seen in the photo , finally calf number2 has learned how to feed itself. I kept it alive by feeding it milk replacer for 5 days. It just did not have a clue what to do even though the cow was co-operative. So that is one chore off my list.
One of the first real snow storms of winter hit on the night of March 6 giving us a few inches of new snow and giving me a few hours of tractor time clearing up the yard and driveway with the blade. This late in the season and I have not yet had to install the snow blower on the old Cockshutt 40. That is a first in my memory.
This year's dry fertilizer arrived by truck today so I won't have to worry about getting it here in April when the frost is out of the ground and too soft to drive a truck some places.
It got a little interesting when the grain auger quit half way through unloading the fertilizer . I was desperate enough to actually consider welding the u joint back onto the drive shaft but after finding it was just a key dropped out of the shaft we were able to install a new one and finish the job. There is really never a good time for a grain auger to break down.
There is still plenty of time for a good old March blizzard like the one that hit last March 22.
Posted by Ralph Goff at 8:57 PM 1 comment: