It hit 92 here this afternoon and I haven't ventured out of the house since dinner. Nothing really urgent needs doing that I have to endure that heat and humidity. I finally gave up on waiting for rain and set up a sprinkler on the garden this morning. Its doing pretty good considering how dry its been but this heat will make it wilt. Seeing some early blight on the potatoes but they are producing well. Some pods on the peas and should have a few ready to eat in a day or two.
This heat will be burning the crops on the sandy hilltops as they run out of moisture. Its been great for haying and I got most of mine cut and baled within the past week. Nice working late in the evening when there is enough moisture on the swaths to bale well.
We are actually pretty lucky to get enough rain to produce some decent hay and then dry enough to harvest it.
Posted by Ralph Goff at 3:10 PM 3 comments:

In spite of not getting any hay cut or baled, the past week was pretty productive. Moved the majority of last year's crop to the terminal cleaning out ten grain bins. I suppose if I hadn't been doing that I might have been cutting hay. But it seemed every day there was either showers or the threat of them and I'd probably not have cut any hay. As it happened, the showers did not amount to much in this immediate area. Seems you can go from dust to mud and back to dust again in the space of half a mile.
I even took the time to get some crop photos with the Merc. The bloom is starting to fade a little on the early canola crops so I knew I better not wait much longer for photos. The sky and clouds were perfect, roads were dry, and the Merc was ready to roll. I think I got some of my best crop photos and video yet and put some of it on youtube. It will be good to look back on in December when the snow is blowing.

I've emptied 9 grain bins in the past 24 hours and my back isn't even tired. The grain vac has to be one of the best inventions ever. And what a relief to get rid of that high moisture wheat without any spoilage or beetle infestations. I'd been a little worried about it ever since the weather started to warm up. The small fan did not seem to be doing  much drying even after running a month. The big fan at the West farm did dry some. It all came out of the bin in good condition and is sold to make space for the new crop.
It was a long scenic 100 km round trip to get the grain vac but it was worth it. It was worth shooting a little video as the countryside is half yellow with blooming canola. Clouds were looking their best so this video will make you think all this world's a sunny day.
Now if I can get a day or two without extreme wind so I can get the chem fallow under control maybe I can get back to haying. Hardly a day without a rain shower.

At least now if it rains only the hay will get wet. This roof was overdue for replacement so I took the day to get it done. Its a patchwork quilt of various bits of metal I acquired but I like it.
Posted by Ralph Goff at 7:11 AM 1 comment:

Once again our "land of living skies" did not fail to impress me. Thunderstorm moving across the South while I was still in the clear watching the sunset. Made for some interesting photos and video. And of course an opportunity for some more "Mercury photos". That lightning strike picture is actually a freeze frame from the video. It was many miles away but still looked impressive. No rain fell here. There have been some wild storms in the South with hail and a tornado or two. Plow winds as well. 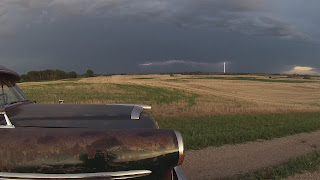