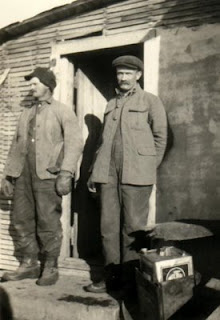 Ernest Nevard at left, Arthur Nevard on the right.
Just occurred to me that it is 102 years ago this month that the old homestead shack was built on the Nevard homestead. So here is an excerpt from the family history, "The Narratives of The Nevards"......
As a school girl Mother (Mary Nevard) never dreamed she would ever come to Canada. One day in school, Mr. Motom, the teacher was taking a geography lesson and pointed out the province of Manitoba. He said “This is man-ah-to-bah, some day some of you may immigrate out there.” Mother's thought was, oh maybe the boys might but she never would. Her brothers never came out here but she did. Mother came out with another lady who had been out here before. I believe her name was Miss Prince. She came out to marry her fiancée, a Mr. Hammil.
As the train steamed on it's way towards Winnipeg Mother noticed the wild roses blooming in the prairie grass. She thought, Canada can't be such a bad country if roses grew there. A passenger got off the train at one stop and picked some roses for her.

Dad was waiting for them in Winnipeg. From there they went to Indian Head where Dad had work for the summer. He rented a house from Captain Corse. Uncle Arthur and Uncle Horrie were also working in Indian Head at that time. In October the weather was turning colder. Captain Corse who was living in a tent for the summer wanted to get back into his house before winter. Dad and Uncle Horrie went up to the homestead and built a two room house. Uncle Horrie said there was a snow storm while they were building.

During the summer of 1906 Uncle Horrie purchased a bicycle which he rode up to the homestead one day. Along the trail he had a flat tire and nothing to repair it with. He called at Fort Qu'appelle but there was nothing to repair tires with in the village. He had no better luck when arriving in Lipton. He had to stop quite often to pump the tire up. It was rather difficult riding on the Touchwood trail as the ruts were so deep one had to steer the bike straight and not swerve or one would catch the sides of the ruts with the pedals and over you would go.
I believe it was on a Friday when the five of them left Indian Head bound for the homestead. They started with a loaded hay rack mounted on wheels. When they arrived at Fort Qu'appelle there was snow on the ground and they switched over to sleighs under the hay rack. They stayed in the hotel at Fort Qu'appelle the first night. I think Dad ate a whole duck for his supper. Meals were cheap in those days. I think Dad said the meals were 25 cents.
Saturday morning they continued on their way along the Touchwood trail til they reached the stopping house of Neils Larson north of Lipton. Larson kept a stopping house for travelers along the Touchwood trail. They were no more than three miles from the homestead so they arrived in good time the next morning. Mother told me that just as they got onto the home quarter the horse tied behind the load broke loose. Uncle Arthur went off running after it and was successful in catching it before it went very far. When Mother came around the bush and caught sight of the house I don't think she was very impressed. Bill was safely hid in amongst the various household effects and could see nothing. Among many jobs which had to be attended to that day was the airing of the bedding.
Uncle Horrie chored for Tom Norris that winter, 1906, while Uncle Arthur chored for one of the Watsons.
One day that winter Bill thought snow looked tempting. It was so nice and white. He took a lick of it on the edge of a dipper and his tongue stuck to the metal. Results were that he had a very sore tongue for a few days. It was a long cold winter and they were only too glad to see spring come. Bill enjoyed running from bare spot to bare spot on the prairie. Mother never saw another woman all winter.
In 1907 Dad went out to work and Uncle Arthur stayed on the farm and did some breaking. This was the year Uncle Horrie worked for Dick Copithorne in the Wideawake District north of Indian Head. Uncle Horrie filed on his homestead in September 1907 taking the N.W. Quarter of section 24. This was the quarter which the Browns had filed on previously. That was the year that Bill had a bad scare. There was a prairie fire north of the house traveling from East to West. Uncle Arthur was fighting fire. Mother ran across to tell him something and left Bill on a rise of ground in a safe spot. When the blaze got into a bluff of dry wood the flames suddenly shot sky high. Bill thought they were all going to be burnt in the blaze.
When they first came to the homestead there were no tall trees, just low bush. Frequent prairie fire had destroyed the trees over quite an area. These low bushes reminded Mother of the English hedges. Mr. Bellrose lived about three quarters of a mile south and west and for a few years until the trees grew, they could see the Bellrose shack over the top of the bushes.
Mr. Bellrose had a lime kiln dug into the side of a hill. Dad, Uncle Arthur and other settlers bought lime from him to plaster their houses with. In 1907 the crops were frozen.
In 1908 Uncle Arthur was again looking after the homesteads. There was sadness in the community that year when our neighbor Mr. McNeil died. Uncle Arthur, Mother and Bill attended the funeral in Fort Qu'appelle. About the same time Mr. Phillips died. My people did not know the Phillips family until later.
Mr. Neils Larson was doing some breaking for Uncle Arthur. Mother had left some food for him. In those days jam came in wooden pails. Mother had just bought three pails of jam, each one different. Later on when my parents began using the jam they found that Mr. Larson had taken a sample from each pail and then nailed the lid back in place. This happened while they were away at Mr. McNeil's funeral.
In 1908 they harvested their first crop. It was threshed by the Dummy outfit, so called because several of the men were deaf mutes. Mr. Larson acted as interpreter. Uncle Arthur worked on the outfit as separator man or fireman on the engine. Tom Goff was on the outfit and the Nevards and Goffs met for the first time.
Posted by Ralph Goff at 11:54 PM 1 comment: 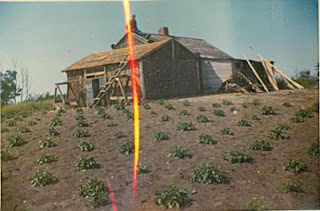 The original Nevard homestead shack built in the fall of 1903 served them well and was lived in continuously until about 1950. Constructed of vertical logs and covered with willow withes and plaster. The dreams of a new house are reflected in the cement foundation a short distance away, now obscured by trees. That was as far as they got with it when the depression years hit making it impossible to continue building.
This photo shows the renovation that went on in the year of 1967. Young "Billy" Nevard was only a year or two old when he came to live in this house in 1905. Here in this photo he works on the roof. In his sixties and retired from years of farming and later working at the sanatorium, this was his restoration project. Preserving a bit of family history.
Posted by Ralph Goff at 12:18 AM 1 comment: