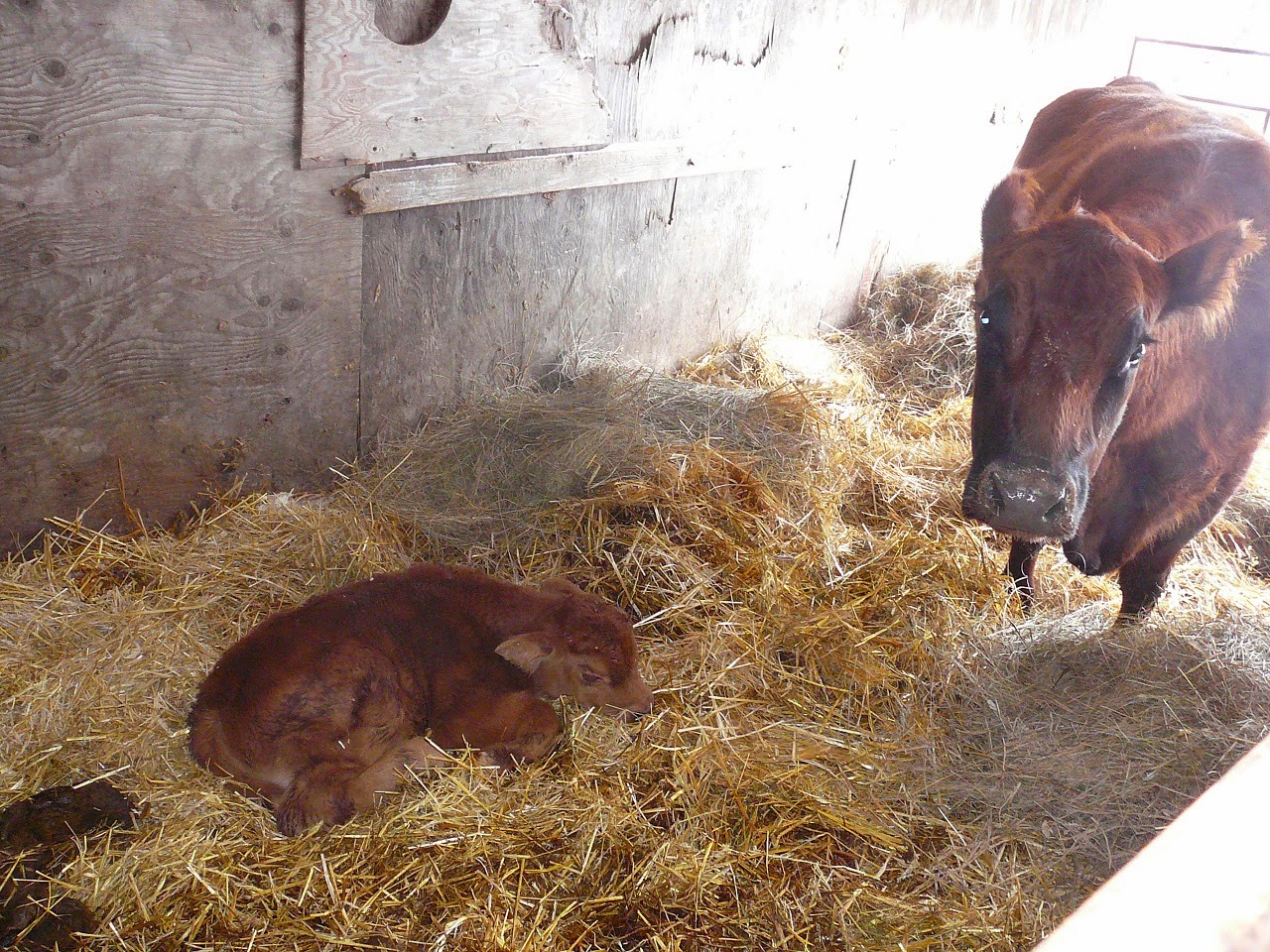 One third of my calf crop was born yesterday. In the relatively dry and clean cattle shelter for a change rather than out in the mud or snow. If I'd been smart I would have penned them in the shelter with the corral panels because by the next morning they were gone. The cow seemed to think her calf would be better off laying in the wet snow under the trees. It was way too far to carry back to the shelter by hand and I knew the old 2 wheel drive pickup would be seriously challenged by the new wet snow on top of the old hard snow so I headed out in the four wheel drive Blazer. 4 winter tires pulled through the snow just fine and I was able to drag the calf into the back without protest or incident. The cow eventually figured out where her calf had gone and turned up back at the shelter. With a little persuading she joined the calf in the penned area and was soon eating hay in relative contentment. With 15 cm (6 inches) of wet snow in the forecast for tomorrow they are far better off where they are.
Posted by Ralph Goff at 8:02 PM 4 comments:

It moves under it's own power. This old Merc is now mobile! Needed a little trans fluid added before it would move but once I figured that out we had liftoff. Interesting driving with no brakes and a plugged idle circuit that won't let the old flathead idle slow without stalling. So it is a delicate balance of foot on throttle, hand on shifter and other hand on steering wheel. Plus a hefty block of wood as a stopping point so I didn't roll through the back wall of the workshop I was backing nto.  So far nothing run over or dented. Waiting for the ground to dry up enough to drive around the yard a bit. First the snow has to melt. And its still coming down. Early spring? Maybe not.
Posted by Ralph Goff at 7:00 PM 1 comment:

Sometimes what seems like a simple task can turn out to be near impossible. When I took on the project of getting the52 Merc running I had only faint hope that it would actually happen. But surprisingly it was easier than expected.
So today I take on the relatively simple task of tightening the fan belts which is so simple that monkeys from the zoo with a monkey wrench could do it and I failed.
I can get one belt tight but not two. Spent the whole morning just to get back to square one. Maybe I will consult the knowledgeable folks at the Ford Barn forum for some free advice. I'm sure I am missing something  obvious. It is not supposed to be this difficult.
Now I need to clean the blood stains off the fan and pulleys. 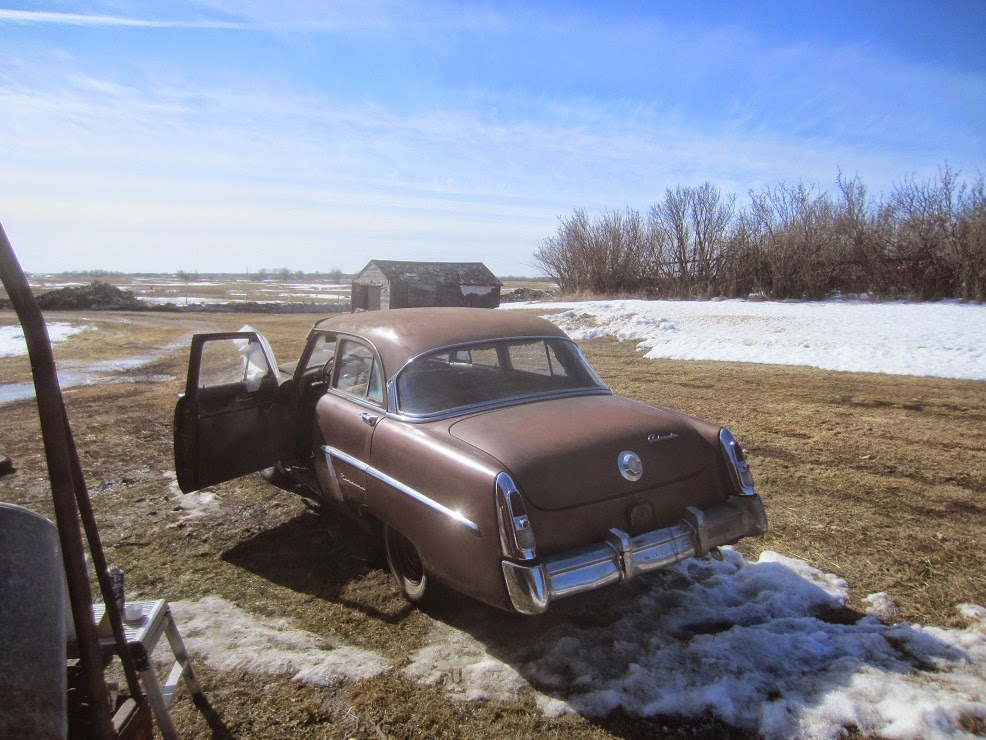 Smoke But No Fire

If I had any close neighbours they might have thought I had a fire in the yard today. The old Mercury fired up and ran long enough to burn off some of the oil that had been soaking in the cylinders all winter. I had to get a little inventive as the old six volt battery was just too slow cranking for it to start. I set up an auxiliary 12 volt battery that I could connect direct to the starter side of the solenoid allowing 12 volts for cranking but still keeping six volts on the other side for the ignition and the rest of the electrical system. It worked well. Cranked over right smartly and fired up. It does sound like one cylinder is a little low on compression but considering how many of the valves were stuck open when i first started working on it, I can't complain too much. Need to run a compression test now to determine which cylinder needs attention.
Not too surprising that both water pumps leak anti freeze around the shafts. I'm hoping they might seal up a little with use (wishful thinking maybe?) but I drained the system so it doesn't all leak out overnight. Still too cold at night to leave water in the cooling system.
I am a little amazed that the fuel pump and carburetor work as well as they do considering they have been sitting unused for over 30 years.
A new problem surfaced when I tried dropping it into drive. Absolutely nothing happened. Not even a clunk or hesitation. The fluid level looked good when I checked yesterday so I don't know what the problem is there. I had hoped it might at least move under it's own power but that won't happen until I figure out the transmission problem.

More On The Mercury

I'm sure loyal readers have been wondering when I will ever get around to actually trying to start this old Merc . Today, March 15, I was so inspired as it was mostly sunny with the temp relatively warm at 40 degrees. And since I had nothing more important to do I set the wheels in motion for a test start. This old flathead Merc has been sitting in the woods for over 30 years so I did not have high hopes of it actually running. After un-sticking numerous stuck valves I was able to get compression on 7 out of 8 cylinders. Guess that last cylinder is going to need a little more "un-sticking". Rig up a temporary gas tank and set a huge tractor battery in the box to supply cranking power (its a six volt system) and proceed.
Of course I shot some video just in case anything exciting happened.

With spring time temperatures making it a little more comfortable working outside, as of today, March 14, the Merc has ignition spark. It took a little filing of the ignition points (remember those?) and some cleaning of the distributor and coil terminals but now there is a good healthy looking spark when it cranks so that is one more step. With compression on at least 7 cylinders and spark on all , there is a chance the engine might eventually run. I did not shoot any video of this but here is some from earlier in the winter showing a brief compression test.

Deck Chairs on The Titanic

About as useless as re-arranging the deck chairs on the Titanic. Meaning that what you are doing is really not going to affect the eventual outcome.  Its an old expression that came to mind the other day while moving wheat and canola to a different bin.
Even at the unattractive spot price there are not many places buying canola, or any other grain right now. Most blame the railways. That has worked for years .
I needed to make room for granular fertilizer and the bin was full of canola. The only other reasonable option was to move this canola to the other farm some 8 miles away where there was adequate space to store it til the price goes up (or more likely down).
The snow is going away slowly with daytime temps in the high 30s and we are starting to see some bare ground in places. Early spring maybe? No excess water? We can only hope. 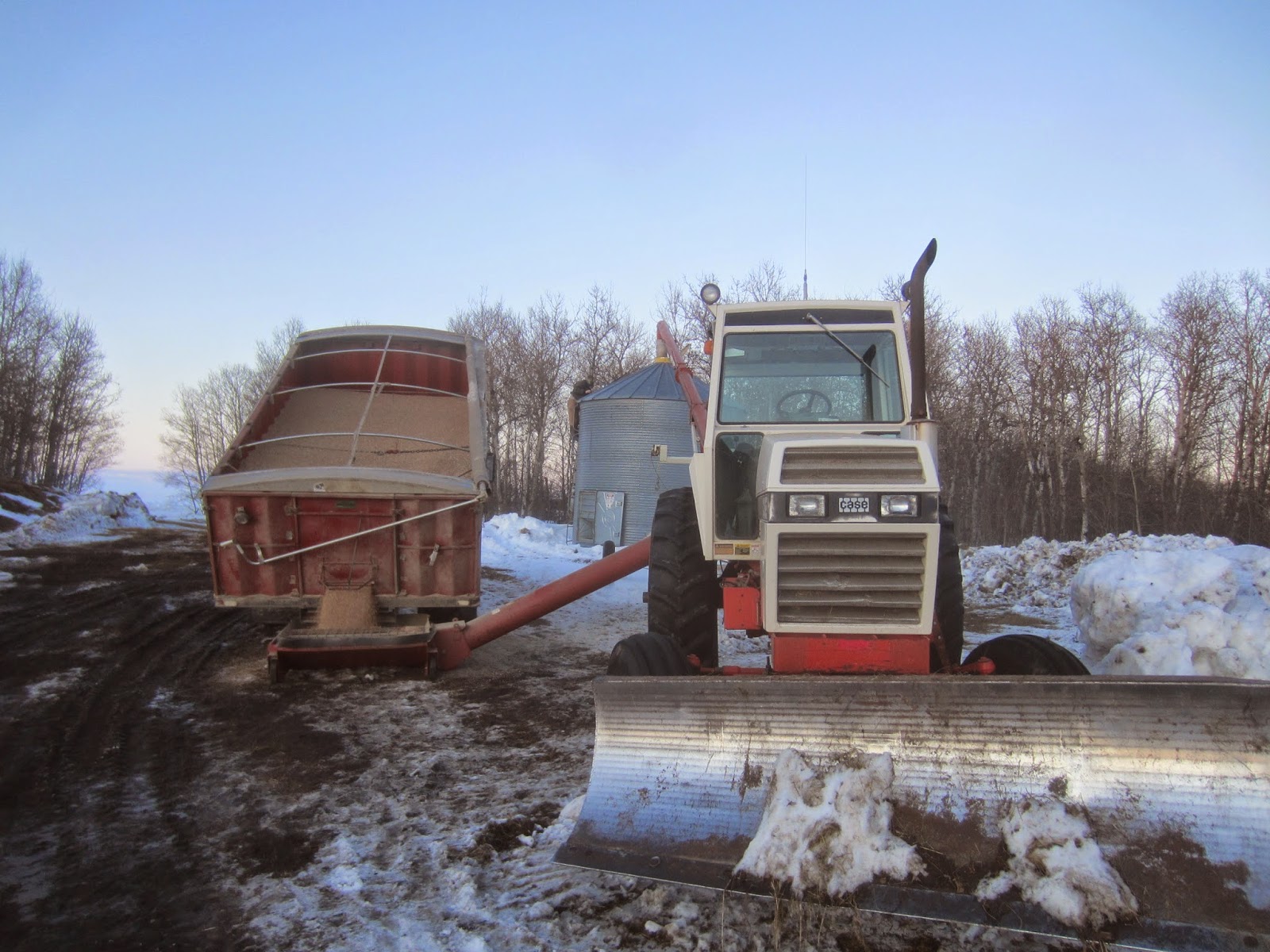