First of September already. As the old song says, "the days grow short when we reach September". And we can see it for sure as the sun sets a little earlier every evening.
Heavy smoke in the air last week. Supposed to be drifting in from fires in the Northwest U.S. they say.
Harvesting has begun in  a few fields but not mine just yet. 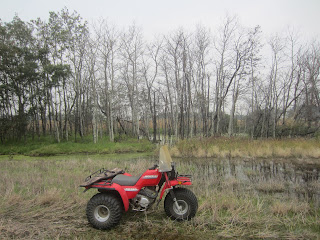 A new beaver dam has appeared in a bad place. The creek is carrying away water that the municipal pumps are pushing across my land but the beavers seem to want to keep the water on my field. The location is in the trees where heavy equipment can't get at it to tear the dam apart so it means I have to create an opening by grubhoe every day. Not the kind of exercise I need or want but I don't need that extra water either.

It was a long and arduous task but the new water pumps are finally installed and the Merc is back on the road as of about an hour ago. I need to polarize the gen as it is not charging. Temperature stays down on normal and no more coolant leakage now. Except for the hose connections on the bottom rad outlets that needed a little tightening.
What now? Brakes maybe? New gas tank? 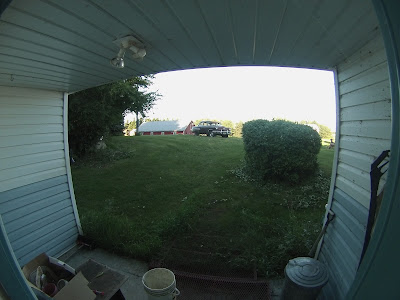 Yes, it rained. At least two inches, maybe two and a half overnight and all this morning. And only a few days ago I complained about the heat, today it is barely 50 degrees and I need extra clothes to keep warm. Not quite ready to turn on the gas heater just yet.
Although weather statisticians are saying we have had the hottest July on record, I refuse to believe it.
A good day to keep busy on "rainy day jobs" that I don't always have time for when the weather is good. More peas and beans picked, cooked and thrown in the freezer today for the winter. Plenty more beans to pick in the garden and maybe I should. The weather guys say a risk of frost for tonight. Lots of partially ripened tomatoes out there too so maybe I'll pick a few of them.
The canola is all swathed and the rain soaked swaths should be well anchored against the high winds we are getting.
I even managed to get in a few minutes here and there to work on the "rusty car project". New water pumps for the 52 Mercury so it will hold coolant and not leak it all out around the shafts.
Trying to stay current on youtube so here is a new "how to" video I just edited on the water pump job.
Here is a scene from canola swathing a couple of days ago. I posted this one on the Saskatchewan Scenery page of facebook which is a really busy page. So far they haven't booted me off the page for my photos, which often feature more old iron than scenery. :-)

Day 3 of swathing canola. Its going well. Fields much better than last year with no risk of getting stuck in mud. The crop is looking pretty fair but at no time could I say whether I am too early or too late with the swathing. One minute the crop is as green as grass and should not be cut. Next minute it is dry and shelling out so bad on the reel that I wonder why I wasn't swathing last week.
Bugs are everywhere including the ubiquitous cabbage butterflies. At times the swallows dive down almost touching the swather reel to catch the bugs stirred up by the swather movement through the crop. The air screens of the engine are coated with living and dead mosquitos and other bugs at the end of the day.
Heres a few seconds of video from inside the cab. 180 degrees of scenery out there all day long. Not a bad place to work.
Posted by Ralph Goff at 10:25 PM No comments:

Email ThisBlogThis!Share to TwitterShare to FacebookShare to Pinterest
Labels: canola swathing in Sask.

Swathing In The Rain

Not something I planned to do but the rain hit when I was at the far end of the field with the swather and I tried to work my way back to where the truck was parked. It actually worked quite well but I figured by 7:30 and with a headache I was ready to quit. Just as well because more rain hit as I drove home. Good thing the new road construction was gravelled or I'd have had problems. Four tenths in the gauge when I got home.
The canola was like most years. In places over ripe but in others so green that it could have stood another week or two before being ready. Always a compromise with this crop.
Some interesting cloud scenery on the way home if I'd only had a better camera or at least got this one focused properly. 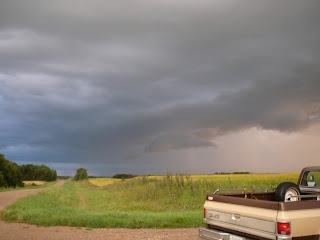 The terrible heat of last week has ended and it is positively cool out there this evening at 52 degrees.
Posted by Ralph Goff at 7:44 PM 4 comments:

I Hate To Complain

I know I complain a bit about the -30 and worse weather we get in winter but this overpowering August heat we have had lately is just too much. It is making winter look pretty good right now. And the relentless hordes of ravenous mosquitos that make life outside miserable are just about the last straw. On the positive side, I hear that only a few of them carry the West Nile Virus!
I probably should not have done it but I shoveled out two bins of wheat yesterday in the 30 something (near 90) degree heat. I usually try to pick my jobs according to the conditions but this time it did not work out. Anyway, the grain is moved and I survived without heat stroke.
It must be the summer of bugs. We have more wasps than I can remember. Been stung twice already and I still haven't finished vacuuming the last of the wasps out of the eaves of the house. The nest I tried to destroy on  a grain bin last week appears to be under repair by the survivors. Time for another night raid.
The aforementioned mosquitos are thriving and multiplying thanks to high rainfall and heat.
Hordes of what appear to be cabbage butterflies are everywhere. I had to stop and clean off the tractor grille this afternoon as it was nearly covered by butterflies.
Time to get the swather out of the shed too as this intense heat will really push the canola ripening. Seems like mine usually goes from not quite ready to past ready in about 24 hours or less sometimes. 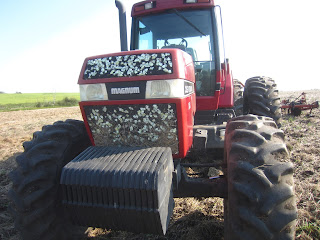 I put in a little time as a "turkey vulture wrangler" on Tuesday morning when the bird tagger came out to put wing tags on the young vultures in one of the old houses on my land. They were getting pretty big, just about ready to fly. Not hard to catch or hold but they are not the most attractive wildlife to have to handle.

You can read a little more details on tagging turkey vultures in Jared Clarke's blog
Posted by Ralph Goff at 8:50 PM 1 comment:

It has become an annual event. The antique cars on display at the local museum really help bring out a crowd. Even better when the weather co-operates, as it did yesterday. Although small in numbers by some standards, it takes a long time to make the circuit and view all the cars. So many people to talk to and discuss the various vehicles.
I shot some video. Including some views of the ground taken while I was walking around forgetting the camera was on. I might get around to an edited version for youtube.
Not too hot or windy. Roads had dried up from the rain to the point that I could avoid what few mud puddles remained and get the Chevy II parked along with the rest of the "antiques". At just over 80,000 miles it has less mileage on it that some much newer vehicles. Got a few compliments on the car and a few on the original owners of the Chevy from the older folks that remembered them.
Next year? Maybe the Mercury?