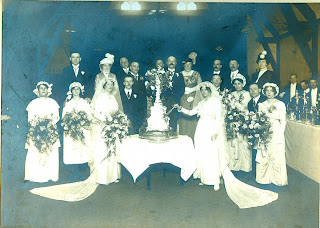 This letter to my grandfather was written in great detail by his sister, Emily,
back in Lexden, Essex. Describing the wedding of their younger brother, Cecil Nevard.
I was tempted to leave out some of the minute details of the pink helitropes and such
but thought at least one reader might find them of interest.

Now I have some news to tell you I will write . I went up to London last Saturday and saw Cecil married to Ethel. It was a
double wedding as her twin sister Alice was married directly after Cecil and Ethel. Of course one service answered for both.
The wedding took place at St. Mark's , Battersea at 1:30 p.m.
Mother went up with Cecil on Friday morning. Miss Dumm, Mrs. Cornish's aunt, went up with me. We met Will at Colchester
Station and the 3 of us travelled up together. It was raining fast when we left here but by the time we reached Liverpool St. it had
cleared up fine in time for the wedding. When they left in the afternoon the sun was shining bright. It couldn't very well shine on
them in the church as the windows are high and the church is rather dull. Not so bright as Lexden church. The Rector of St. Mark's
married them. Our Rector, Mr. Evans promised Cecil he would go up and marry them and he fully intended to but two youngest
girl Spurgeons wanted to be married on Saturday. The Rector tried to persuade them to put it off and tried to get another clergyman
to take it but could'nt. You see a great many clergy object to marrying anyone on that day as they consider it Lent.
The service was fully choral. The organ played selections before the service during the time the people were assembling in the church.
We drove in style in a motor brougham. There were 6 motors employed for the bride's guests, etc. The service was very nice. The
processional hymn was 281, Lead us heavenly father lead us, and the other was 578, O perfect love all human thought transcending.
The bride looked very nice dressed in cream crepe de chene with long trains. The dresses were trimmed with real lace. They had
white tulle veils and wreaths of orange blossom, carried bouquets of white carnations, lilac and white heather.
Ethel's two bridesmaids were dressed in very pale pink, almost flesh color crepe-de-chene and Alice's were in pale helitrope.
They all wore tunics (which is like a coat without sleeves) of cream lace tied around the waist with a girdle or sash. On their
heads they wore little round caps of lace with a frill round. The ones that wore pink dresses carried helitrope lilies, and those
that wore helitrope carried bouquets of pink carnations.
The reception was held in St. Mark's hall adjoining the church. It is a very large hall. You could put the institute inside it. There was
a long table down each side of the hall. On one table the presents were arranged and the other was for refreshments. The large
wedding cake stood on a table in the centre of the room. It was 2 tier, a large cake at the bottom and smaller one above, then a
receptable above full of lovely white flowers and smilax trailing down.
Mr. Cornish provided lunch for all the guests who cared to go to the hall before the service. We had ours at the house. The bridal
group with Mr. and Mrs. Cornish and the 2 best men had their photo taken with the cake in center of group. There was plenty of
nice dainties to eat, champagne,tea, coffee and other drinks. Piano and two violins played lively selections during the afternoon.
The brides and their bridegrooms changed their costumes in dressing rooms at the hall and each left in a motor about 4 p.m.
Cecil and Ethel for Lowestoft home, Alice and Bob, or rather, Mr. and Mrs. Duminel I should say, en route for Bournemouth.
We left the hall about 5 p.m. and returned to Mrs. Cornish's house again. We had supper and left just after 7 p.m.. Mr. Cornish
provided a motor brougham for us to drive to Liverpool St.. We had a good view of London along the embankment. We passed
St. Thomas' hospital, St. Paul's cathedral, Bank of England, and a lot of other places too numerous to mention. Mother,
Miss Dumm and I came home but Will stayed on until Sunday night, being his first visit to London he wanted to see all he
possibly could. We left a party of friends at the house.
Louie went to Sax station to see Cecil and Ethel as they were passing through. She took them some butter, eggs, bread and
pickles. Cecil has a very nice house and nicely furnished. Mrs. Newton, his landlady, very sorry to part with him...............
Posted by Ralph Goff at 8:58 AM 3 comments: