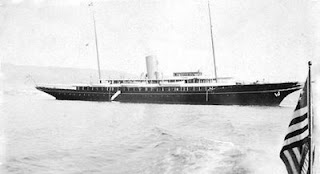 We are approaching a historic date in my family's history. Easter Sunday, April 12, 1903 was
the first day my two great Uncles, Ernest and Arthur Nevard first saw Canada.
They had sailed with the Barr Colonists on the S.S. Lake Manitoba from England. No personal
reports but from what I have read, it was fairly arduous voyage on an over-crowded ship.
They got off the ship the following day, April 13th, Ernest's 25th birthday.
From there, a long journey by rail as far as Winnipeg, Manitoba where the two Nevard brothers
got off the train, deciding to go off to seek work on their own and abandon the idea of the
colony. They eventually got their homesteads in what later became the province of Saskatchewan.
Posted by Ralph Goff at 10:10 PM No comments: