Sad ending to a young life 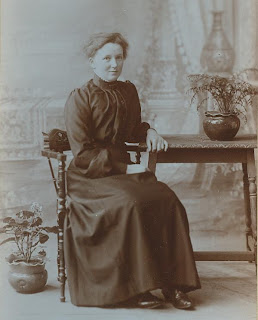 A letter from Susan Hall to her daughter, Mary Nevard in Canada.
Grove Farm
Saxmundham
Nov. 13th, 1910
My Dear Mary
I thought you would like to hear from me again as soon as I could write. You asked me about things
that you couldn't understand. I will try to explain everything. I may have told the same before.
I received a letter from dear Annie the Thursday after the baby was born, it was born the Tuesday night.
In it, it said Annie was going on alright and I needn't worry but I still felt bad when I found the dear little
baby was dead. I wrote back directly and she received my letter that same night and she was very
pleased to receive it. Then I had a postcard on the Saturday morning to say she was going on nicely.
The next monday morning there was a letter to say that poor Annie was suddenly taken worse the
Saturday night. I said well I must go and see by the next train, so Alice and I both went. We couldn't
have both went and left Louie but Mrs. Nevard came here the Friday before.
We sent a telegram to Herbert to say what train we would be going by. He met us at Liverpool street
and told us poor Annie had passed away. We wanted to go and see her but he said he couldn't take us
it would be too much for us coming so sudden and he couldn't bear it. But he said he had sent a telegram
for Father to go up but we were got to the station before it came. He kept saying he wanted Father to
come so he sent a telegram to Father to say we were coming home, would he go. So Father went by the
five train. Alice and I were very much upset. We felt it terribly to think we couldn't see her. Alice took her
night dress and other things, I though she could stop with Annie a few days.
When Father went he cheered Herbert all he could. He said he had nothing to live for in this world. He
seemed as if he didn't know what he was doing. They all told Father he had done him a world of good.
Father said he done the right thing not having us go to see dear Annie. If I had known I would have left
anything to have gone and see her before she died.
Dick and Maude had been waiting to come when Annie and Herbert came for their holiday. I am sending
you a memorial card of dear Annie. They were not done when I wrote to you.
Herbert's sister, Susie, thats living in London used to go and see Annie very often. She was there the
Thursday before she died. She said she worried so about losing the baby. I wish they had wrote and told
me then. I should have gone but I didn't know it.
We shall send you some of dear Annie's clothes later on. We thought of sending her wedding coat and shirt
and white silk blouse as I should like to send something good. We were glad to hear you had got the threshing
over. I hope you will be able to make a good price. I will answer Ernie's nice letter another time
Hoping this will meet you all quite well.
With love to all I remain your everloving Mother.
Susan Hall
Posted by Ralph Goff at 11:30 AM 2 comments: 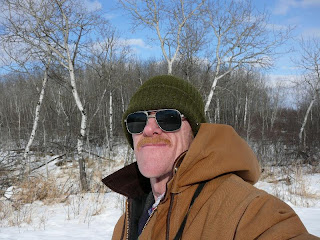 Silver Birches
No, those are just common Poplar or Trembling Aspen trees in the picture behind me. But they have the similar white bark that might fool some on first appearance. I wonder if these are the type of trees my grandfather, Horace Nevard saw back in 1906 when he first came to homestead this farm. It was not uncommon in those days to have a farm name for the homestead and the three Nevard brothers were no exception. Ernest named his "The Poplars". Brother Arthur named his "Winstanley Grove" no doubt inspired by his wife's maiden name of Winstanley. Horace chose "Silver Birches". In the many acres of native bush land on that farm I have yet to find a single Birch tree although I have not seen it all. My Uncle always claimed there were a few left but never got around to showing me where. The search continues.
Posted by Ralph Goff at 9:06 PM No comments: 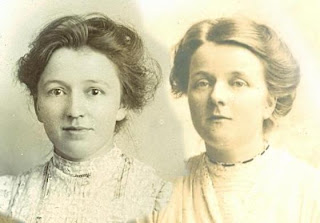 Letter from Alice to Horace on New Year Eve 1909
Grove Farm
Saxmundham
Dec. 31st, 1909
My Dear Horrie
I was very pleased to receive your nice letter. Mother sent it on to me because it came while I was
staying with Annie and Herbert. I had such a nice time at Christmas. I hope you all had a happy Christmas. I should
like to have seen you. I went to London last Friday and there was such a lot of people went by that train but I managed
to keep a seat for Cecil at Colchester. When we got to Liverpool St. we did not see Annie and Herbert for twenty minutes
as they were on another platform so I was very glad that Cecil was with me or I should have felt quite lost. I stood and
waited with our luggage while Cecil went and had a good look all around the different platforms so he found them up.
We went by tram part of the way to Annie's home. Cecil came with us and had tea and then he went on to Victoria to
meet his young lady. I did not go about London very much as Herbert was on duty all night and Annie does not know
very much about yet to go with me alone without Herbert. We went to Victoria Park on Christmas day. It is lovely in the
summer. Annie and I went to Stepney Church on Sunday morning and we stayed indoors the rest of the day. Herbert's
sister came in the evening and stayed to supper.
On Monday we went and saw Herbert on parade with the other policemen but we did not stay out only about half an hour as
we liked to be at home best in the evening and then on the Tuesday Annie took me to see the tunnel which goes under the
Thames and it is two miles long and lit up by electric light. It looked very pretty but I think it would make anyone deaf to stay
there long for it is one continual noise all day long. Herbert went with Annie and I to see some moving pictures one evening
and they were very good. I had never seen anything like it before. I think it is wonderful how it is done.
It is a nice quiet street where Annie and Herbert live only the trains run quite near by the house all night long and I could feel
the bed shake when they went past. There is some rope works at the back of the house which commence work at 6 o'clock
a:m and they make rather a noise. I like Annie's little home very much. It is very nice and cozy and they have furnished it nicely
and they are very happy. Herbert told me I could stay a month if I liked but I thought I had better come home as there is a lot of
work for Mother to do here alone so I came home by the next and reached Saxmundham about six o'clock. Father was at the
station to meet me. Mother was rather worried about me as I wrote and told her I was coming by an earlier train so she was afraid
I was gone on to Yarmouth but I am got home safe and sound.
You said in your letter that I must tell you all about my visit to London and I expect you will think after reading all this that I have
done so. I would like you to have been with me, it would have been so nice. Cecil wrote to Louie and told her that he had enjoyed his
holiday very much. I have been to Saxmundham this afternoon and I feel rather tired today, but Louie says it was riding in the train
yesterday for such a long while which made me tired. Dick and Maude and the two little girls came here on Christmas day and went
home on Sunday evening. I expect you have finished threshing. This is New Years Eve but I don't think I shall sit up to watch the old
year out and the new year in. It is past ten o'clock now and they are all gone to bed except me so I think I shall soon go too as I don't
like to be here alone. Louie sends her love to you and best wishes for a happy new year.
And now dearest I think I will conclude hoping you are all well. With love to all and my best, truest love to you dear I remain,
Your everloving Alice XXXXXXXXXXXX
Posted by Ralph Goff at 6:42 PM No comments: