Rainy day work here in the workshop shining up the remaining paint and chrome on the 52 Merc. For some reason it reminded me of Anthony's Song by Billy Joel. What remains of the original "Fanfare Maroon" paint looks great after diesel fuel and dirty rags followed by Turtle Wax rubbing compound.
And surprisingly most of the chrome is good too despite reading that cars of that year had poor chrome due to shortages of nickel during the Korean War.
"Patina" seems to be the latest trend in restoring collectible vehicles and this car sure has it. Right down to the undercoat and bare, slightly rusty metal on the roof. It took 40+ years of sitting out in the weather to acquire this "finish" and I'm going to make the best of it. I think Budd E. Shepherd is doing the same thing with his Studebaker.
Currently the Holley "teapot" carburetor is off for cleaning and new gaskets. I worked overtime getting the horns re-installed today. Just wanted to hear how they sound so I hooked up a battery and was only able to get a "click" out of the relay. Needs a little investigation I guess. 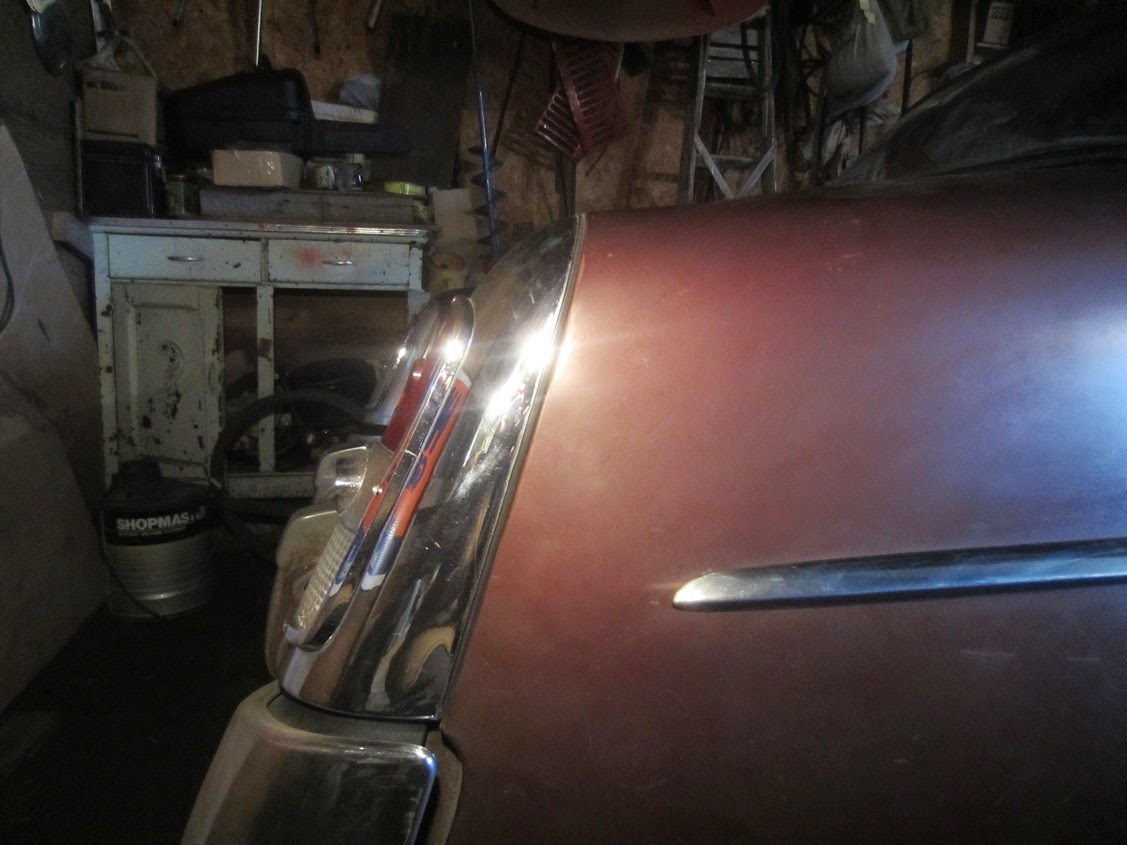 Cool and damp weather is uninspiring here in April. There are warnings of snow for parts of Sask. today which is the last thing we need. So far it is just rain which will mostly run off the already saturated fields. Water is still coming to the surface and keeping the sloughs full to running over.
Maybe I should have bought one of these four wheel drive tractors at the farm auction yesterday.
The number of roads that are either under water, or close to it, was amazing yesterday. Soft spots on even the "good" roads are going to break down once the fertilizer trucks start running.  New lakes are forming in fields. Some of my "islands" are only accessible by trike , except for the ones that aren't.
Who ever dreamed of this in good old "dryland Saskatchewan"? I think I will go and take a picture of the geese swimming over the driveway to my Uncle's farm. 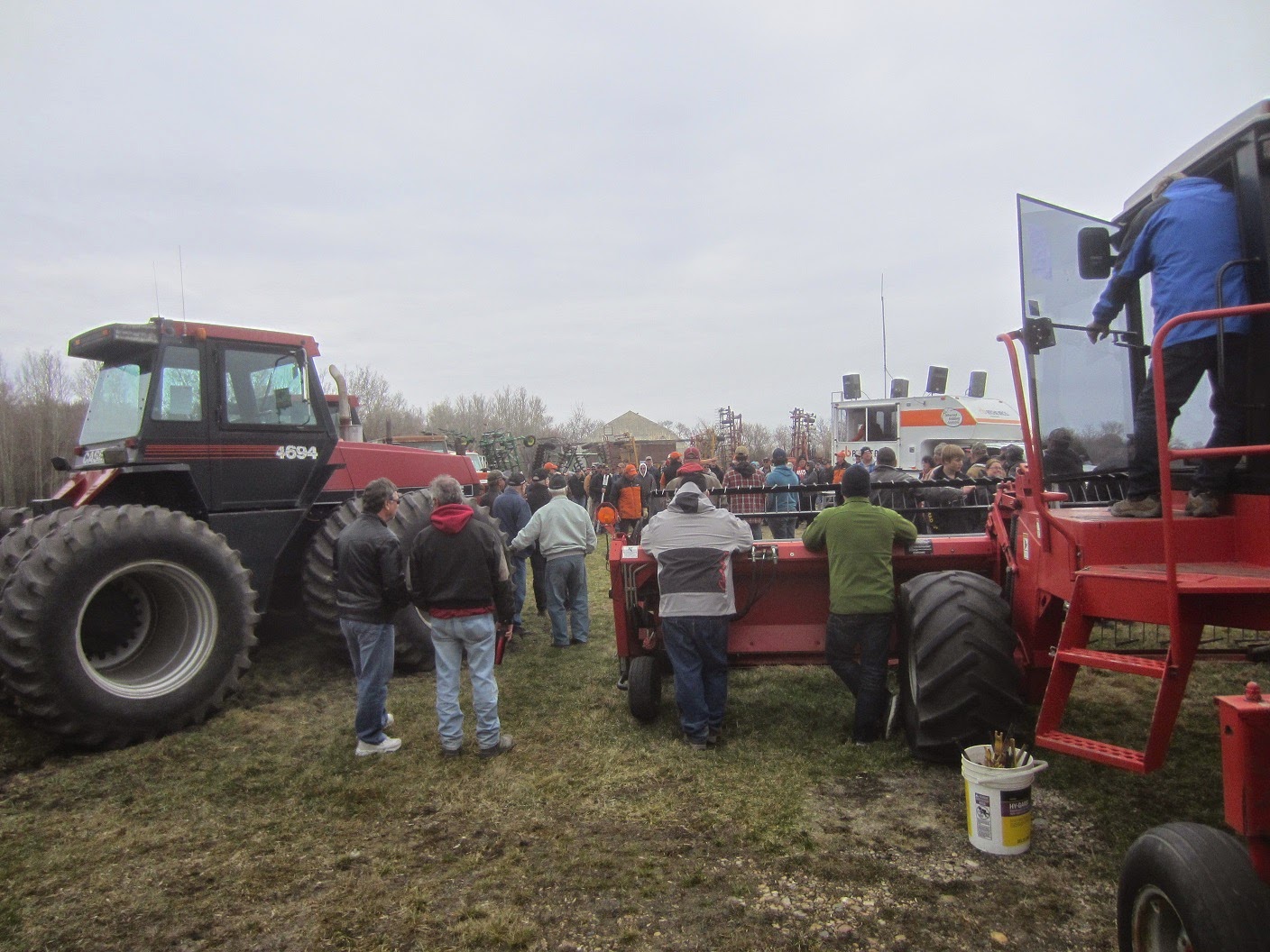 Posted by Ralph Goff at 8:52 AM No comments:

The Still of The Evening 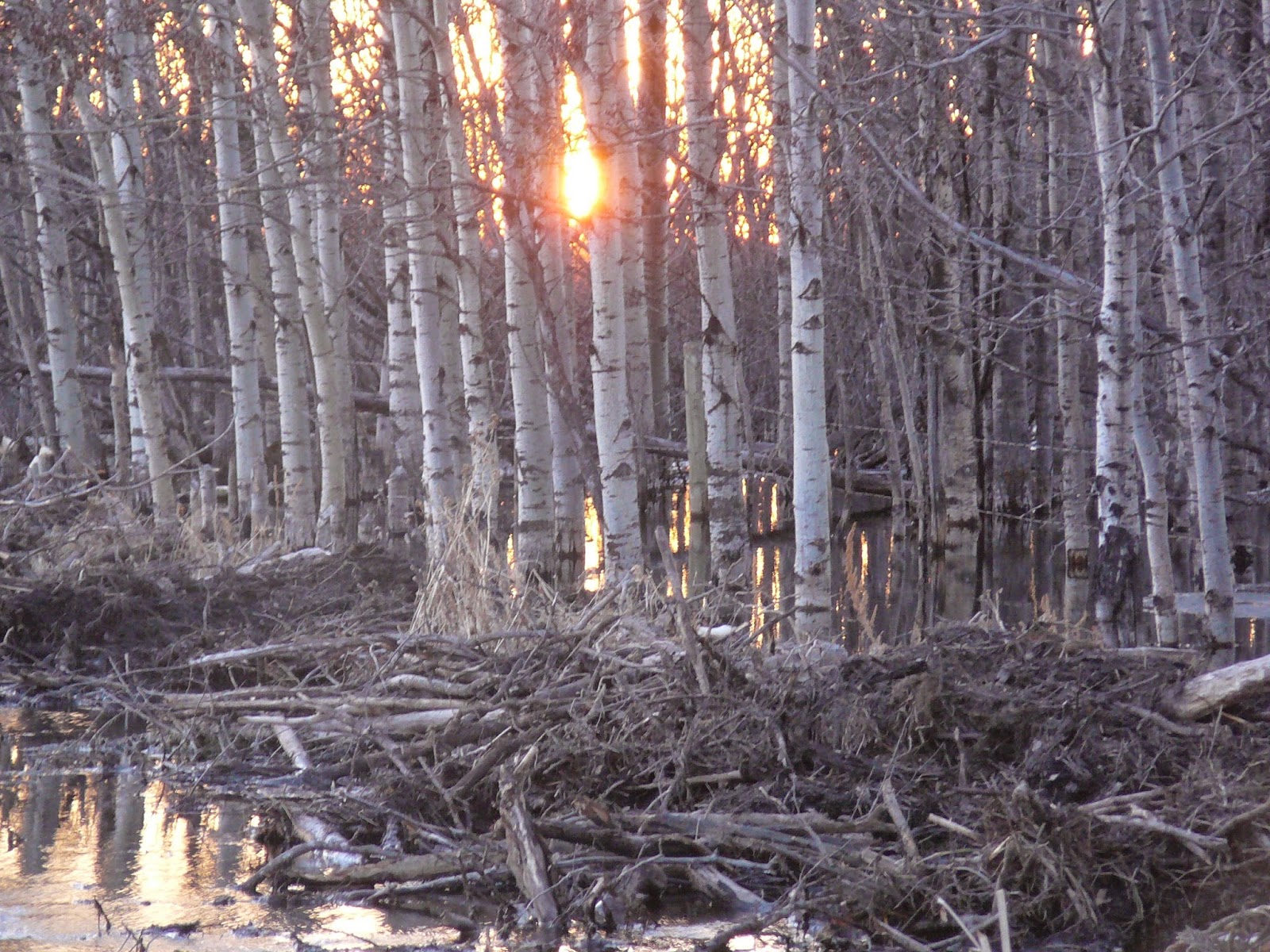 Silent and still at sunset out at the beaver dam this evening. Hardly a breath of wind and the water still as glass reflects the poplars standing in it flooded by the beaver dam. Actually not that silent either. No noise but plenty of sound. Chorus of frogs, occasional ducks and blackbirds calling. Off in the distance cranes that have settled in the stubble field for the evening call to each other. The hunting Horned owls hooting intermittently as they fly on silent wings. Miles away the occasional distant boom of  a shotgun as land owners try to deal with the excess beaver population.
Posted by Ralph Goff at 8:47 PM 3 comments:

Email ThisBlogThis!Share to TwitterShare to FacebookShare to Pinterest
Labels: beaver dams, still of the evening.

No, nothing that exciting. For years I had occasional recurring dreams of driving a rusty old car from my youth. Not restored to showroom beauty, just driveable enough that when I pushed the starter button and stepped on the gas it would go. The 52 Mercury my dad drove through the 1960s. The Merc chose to retire in the fall of 69 just absolutely refusing to start in spite of all the usual tricks and remedies. It sat for a few years before my brother, the real mechanic in the family, removed and rebuilt the engine bringing the old car back to life for a while. It went back into retirement soon after and sat rusting away in "outdoor storage".
Last fall for some reason I was inspired to haul the old car out of the bush and start working on it to see if there was any hope of it moving under it's own power again.
Winter in Sask. is not conducive to working outdoors on an old vehicle so it literally took all winter before the day came that the old flathead engine fired up and ran, briefly and with much smoke. That was a giant step forward and inspired me to go further.
A few sheets of salvaged galvanized metal to patch the holes in the floor. Some new (used) tires to hold it up. Blow out the shredded interior with air compressor and leaf blower. Remove the raccoon destroyed rear seat and throw an old horse blanket over the driver seat for some reason made me think of this scene from one of my favourite movies, Pulp Fiction A major exterior clean up with rags, diesel fuel and steel wool had the surviving paint and chrome looking much improved and all at pretty near zero cost.
April 9 the ground was dry enough for a test run. Sunshine, blue sky and the sound of an unrestricted flathead engine running on all 8 (most of the time). Driving a car with no brakes is when you really appreciate that half mile long driveway.  It was literally a dream come true.
Who knows whats next?

Thats what spring has become. Off to a nice early start last week but now back to snowing and cold. It looked nice in the sunshine yesterday but the wind was cold and uninviting. 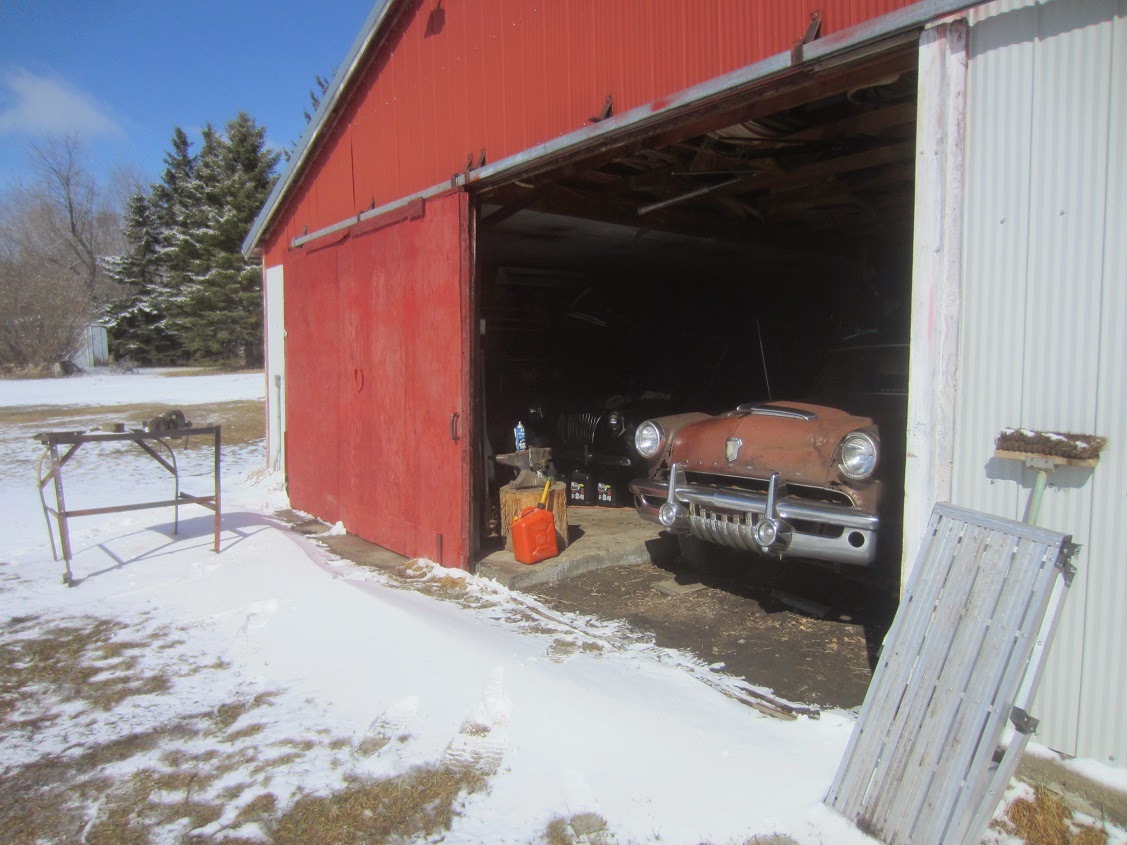 I guess it was a little early anyway. Two short days ago I was out riding the trike in relative comfort in the near 50 degree temperatures. Checking out Silver Birches where I see I have lost the battle with wildlife. Raccoons and skunks have found their way under the wall of the house and the whole place reeks now. I did not encounter any wildlife inside but plenty of sign of their activity.  The trail in remains under water in two spots making it inaccessible to heavy vehicles. 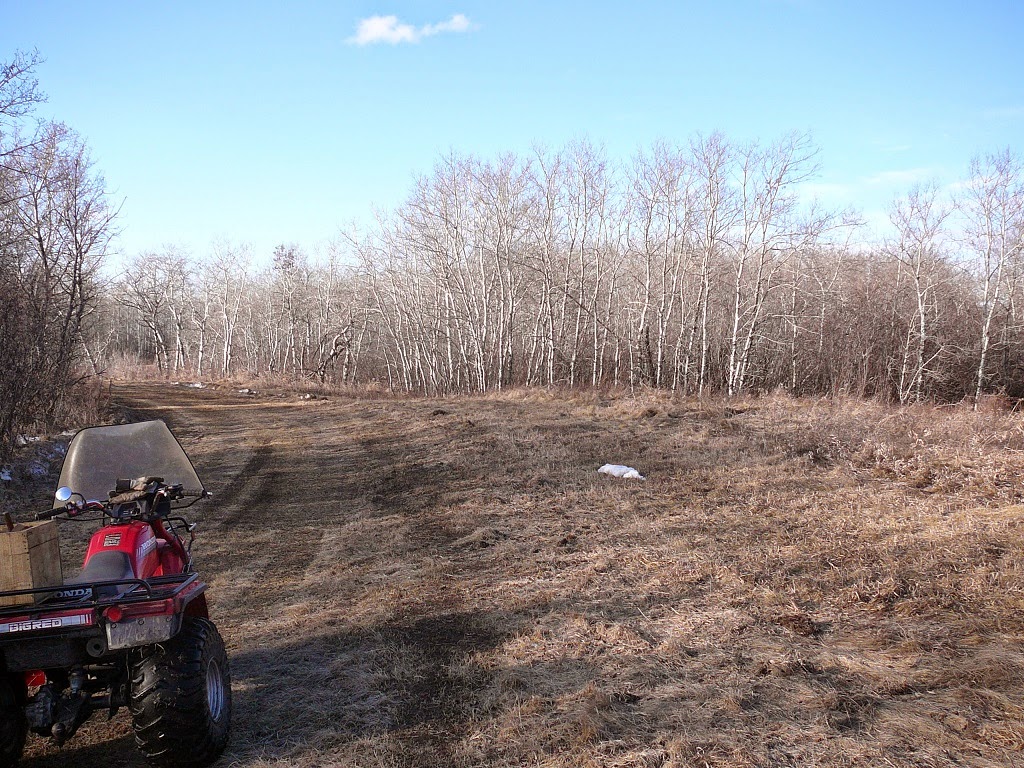