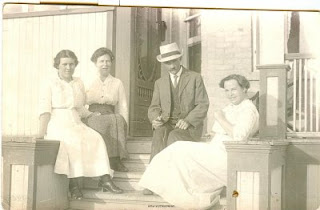 Daisy
Posted by Ralph Goff at 9:15 PM No comments: 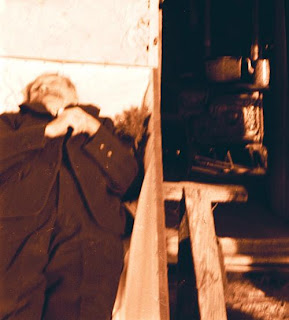 January 15 and it is 67 years since the funeral for Alf Goff. This photo was taken the morning
of the funeral. It shows Alf in the coffin , a plain pine box resting on trestles outside the
door of his log cabin. Through the open door can be seen the wood stove with the kettle still
resting as he left it only a few days earlier.
By the angle of the sun it must have been around 10 o'clock in the morning and they would
likely have soon set out on the journey to Lipton for the funeral that afternoon. A long 12
miles by horse and sleigh with plenty of time to think. January, traditionally the coldest
and most depressing time of the winter. It must have been a sad time for my grandfather
and the rest of the family, losing the oldest member of the trio that had emigrated here
from Dorset, England back in the spring of 1903.
Posted by Ralph Goff at 8:25 PM No comments: