I've spent more hours fixing fence the last three days than I have in a year. I had neglected the fence this year so was "inspecting" it from the cab of the swather as I cut the field of oats. Shocked to discover that one stretch was pretty much gone. Being submerged in water for years will do that to a fence and this dry summer has taken away the water leaving no barrier except for the beaver trenches. Which the cattle could have easily walked through if they had tried.
Finished the field and figured I"d still have enough daylight to at least get one wire up. Turned out to be a major task. Jumping over the beaver trenches carrying a roll of barbed wire and various other fencing tools, stringing out wire through mud and over broken water killed trees, tangled and rusty "re-cycled barb wire" was a real test of patience but I got a couple of wires in place. Finished the job up next day and decided to inspect the rest of that field border. Again I was shocked to find places where dead fallen trees had put the wires down to near ground level and it was just pure luck the cattle had not found it. So, more picket pounding with the big heavy old hammer. Most locations were inaccessible to use the tractor and front end loader to drive the posts in so I got more than my share of exercise. Posts are hard driving when the ground has dried but that has not been a problem for years. Luckily we are past the wood tick season and there are very few mosquitos.
Had to fight my way through a veritable forest of bulrushes in some of the dried up sloughs. I literally used the chain saw to cut them down in one spot. These in the picture tower above the fenders of the Massey as I drove through. 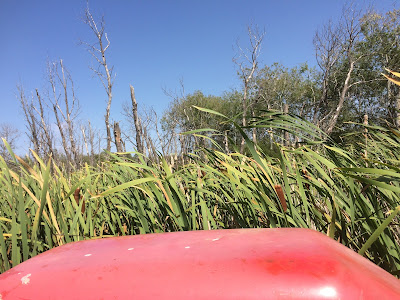 Much Ado About Nothing

That is my opinion about the much heralded upcoming solar eclipse. People are traveling many miles and buying special glasses to watch the eclipse of the sun. I seem to be one of the few that feel no inclination to do either. We are well out of the path of totality here in Sask. but even if we were in it, I would not be risking my eyesight by looking directly at the sun. Even with special glasses or a welding helmet. Permanent eye damage is just not worth it. Not worth it
In other news, I've been busy swathing a rather Poor Crop Of Canola. No big surprise considering the lack of rain we have had through the growing season. Maybe I should be surprised it as good as it is.
No doubt the rains will start once I swath my oats. Rain now is too late to help this year's crop but it might help next year's. Be nice to green up the grass for the cattle too.
Currently editing and saving a video of last week's mud bogs and classic car shows and hoping the old laptop does not crash again before the save is complete. 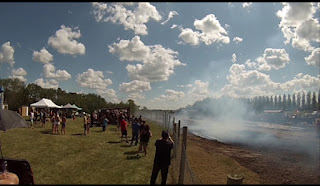 The title is almost the whole story. As usual I am short on time and doing this in a hurry. Wouldn't you know that the only car shows within my rather limited range for  the old Merc would be on the same day. So with a little help from a trusted family member to drive the Chevy II support vehicle, I set out on the longest journey the old Merc has made since the summer of 69.
What a change, driving on paved highway without the road noise of gravel and the dust coating  the interior and all who ride in it.
We made it to the first show in the morning. Not a lot of competition there. Watched the side show  of mud bogs enjoying all  the sound and fury of 4 wheel drive trucks tearing through deep mud at full throttle with mud flying in all directions.  The smell of  racing gas, or was it nitrous oxide,  was in the air. I did a little drone video but with too many distractions  and poor visibility in the bright sun I ended up missing the scenes I really wanted to shoot.
It was an all day show but if we were going to make the second show it meant leaving by early afternoon. Just another 8-9 miles down  the smooth highway to the next town to park alongside the real classics.  Nobody had anything bad  to  say about the rusty old Merc with it's faded paint and  rust holes.  I guess I'm lucky they even let me park there.
No problems until we went  to leave and the old Merc stalled within the first  ten feet. A little inspection and testing revealed the fuel pump bowl gasket was leaking allowing  air to enter  the system. Its the kind of fix I like. Easily done and making me look like I actually know something about fixing old cars.
Made it home safe and still plenty of gas left in the 5 gallon fuel tank. Video to follow when I get around to editing. 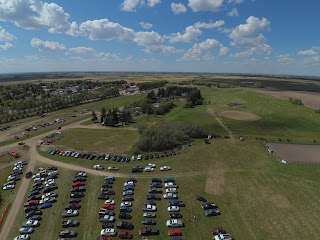 Cockshutt 50 In the Parade 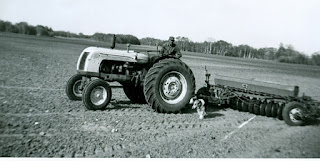 Dad's old Cockshutt 50 tractor had it's first drive through town in probably 40 years this past weekend. The thing about actually being in the parade is that you don't get to see much of it. I could see several ahead of me and a few behind me but not a lot of chance to look around as there are things to watch out for. Like not running into the vehicle in front. Or people.

So, for something completely different, here is the parade view from the inside. I had the Gopro camera mounted on the fender mirror of the tractor