The title almost says it all. Just discovered the last of the 2018 calf crop arrived this evening. The cattle had not been back to the yard in a few days but did turn up this evening when they saw me out there with a pail of oat chop for them. Surprisingly a little new born calf was galloping along with the other bigger calves. I had almost given up on that last red cow having a calf this year.
I finished putting around $300 worth of new parts into the 41 year old haybine to get it working again. A few new sprockets and a bearing should (hopefully) be all it needs to cut the rest of the hay crop. Nine head of cattle don't need a lot of hay for the winter but they do need some.
Crops are looking pretty good and really advancing. We've been getting some "just in time" rains to keep them growing.
Here is some video of a crop tour from last week as seen from the top of the 52 Mercury. Driving by oats, canola and wheat.

Here is another photo from the weekend activities. It was quite a workout but many hands make light work as they say. Thats about all I can say about it for now. 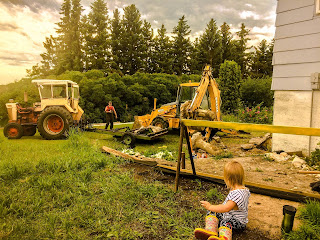 Posted by Ralph Goff at 9:00 PM No comments:

Yes, by our standards today was a hot one. I saw mid to high 90s for the first time this year. Humidity was high too and a hot wind blowing. Not good for flowering canola but it did bring on a good old thunderstorm which left me with 6 tenths rain, if I can believe the gauge. It looks wetter. A few hail stones too just to scare us.
Its no use me complaining about the heat over on the ag forums as the guys from Southern U.S. always have me beat for heat and humidity. But they can't figure how I function on the farm in our winters extreme temps either.
I took the drone up for a short flight mid day. Showing the canola which is fading fast in the heat. Some blossom fall-off is normal at this stage but the heat and wind will accentuate it and is hard on the crop.
Still sitting with a broken down haybine and more hay to cut.  I could (and might) use the swather to cut what hay is left but it is a little weak in the wobble box and I don't want to stress it out too bad as it has a couple of hundred acres of canola waiting on it in a few weeks. Combine needs some major disassembly and repair as well. Or do I keep pouring oil through it for another year? Seems lately that everything I own leaks oil. Or anti-freeze.

So Close But So Far

I guess I should look on the bright side and be thankful I didn't get soaked riding home on the open tractor. It was threatening thunder storms most of the afternoon while I was raking hay but I figured why wait. I've done that before and nothing happened. There were empty grain bins I could go inside if it did start to rain heavy so I kept on til the job was done. And it didn't rain.
I even dared hope I might make it home, hitch up to the baler and come back to bale the hay. It wouldn't take long. Hay looks nice and green having had no rain at all on it.
But I guess not. I had barely parked the Massey in the quonset and I was hearing raindrops on the metal roof. It didn't amount to much but it might not be over yet. And I guess I'm done as far as baling for today. Once again I'm a day late. If it rains much I can use the time to work on repairing a major breakdown on the haybine. Just one big bearing destroyed  but a big job to take apart just to see if the roller shaft is ruined or not. If so, maybe its time to part it out and look for a replacement. This cattle hobby is getting expensive. 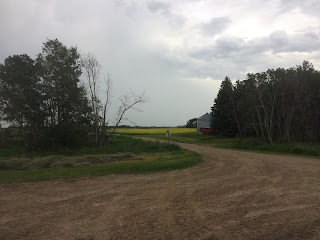 WE had our now traditional trail ride on Canada day again. The weather mostly co-operated although a wild wind blowing. One of many pictures shown here. j 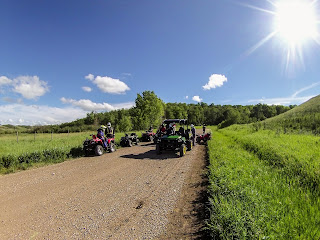 I made good use of the drone today searching  for a missing cow. I had a good idea where she was as I'd seen her  going  into a forest of cat tails yesterday evening. Walking in there was like a 7 foot wall of jungle. I could have spent a lot of time and energy and  maybe found her, or not. I sent  the drone  up from about a quarter mile away and did a slow scan above the slough maybe 50 feet up. Spotted her pretty easy. It was still hard enough to find the exact location on foot but by afternoon I found she was not alone having a new born calf. 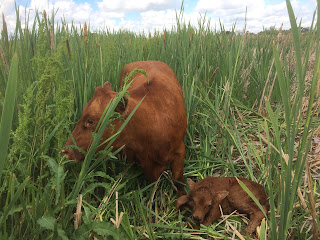 After four months waiting to hear  from youtube re: monetizing my videos, they e mail today and  say they still need  more information. Just stalling  for time I guess. I've already met their specs for channel  views and  subscribers so I don't know what  more they need. Good thing I am not in it for the money.