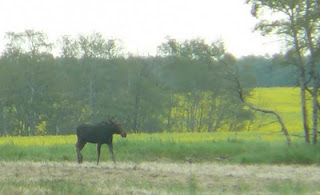 Life is always interesting here on the farm. Working a little
sumerfallow today (which is extremely difficult this summer) and suddenly
I was not alone in the field. Spotted this moose about a quarter mile
away and quickly took a few pics. Moose are not all that common around here
and still cause me to jump for my camera whenever I spot one. This one
had antlers so is the first male I have seen so far. I don't think I
will go wandering around that field on foot anymore as I would not care
to meet up with one of these big guys.
The earlier mentioned hay is now mostly in bales. Borderline too damp but
I think they should be ok. The last little bit was definitely too damp
as I found out when the baler began making a terrible rattling noise. By
the time I got it shut down and looked inside I was already mentally
composing an ad, "For sale, New Holland 847 baler for parts only" as I
feared it was hopelessly damaged internally. After blowing the dust and
chaff out and examining the twisted metal I now have hopes that I can
repair the damage myself just by disassembling and straightening a few
things.
Good thing I have most of
the baling done already.
Posted by Ralph Goff at 9:21 PM 4 comments: 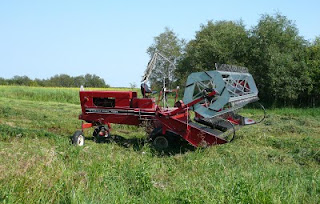 Why do I have to learn the hard way to back up everything worth saving on a computer?
The drive became unstable on this machine last weekend and finally refused to run windows.
I was ready to replace it as it has been giving me hassles for quite some time. But I decided to
try and fix it myself by re-installing windows. It worked but of course everything that I did not have backed up was lost. I am not sure and maybe don't want to know just what all I lost but have some work ahead of me replacing it. I've had an external hard drive for backup for a year now but just did not get around to backing up everything I should have.
I managed to find my way back to some of my familiar sites, including this one, red power, newagtalk
and a few others. Its almost like being "born again" with an almost empty computer and having to re-locate things.
As usual I'm working against the weather. The photo shows some of the hay I cut last Saturday.
Normally it would be dry enough to bale (or already baled) by now but it got rained on a time or two since I cut it. Not sure how much as I don't have a guage at this farm which is 5 miles from home. And 5 miles is a long way when it comes to rainfall discrepancies.
The hay in the photo is unbelievably rank and green. It grows on an old cattle shelter area very rich in nutrients and produces a heavy swath that resists the best efforts of the sun and wind to dry it. I've turned all the swaths with the hay rake yesterday and was hoping to bale it Saturday
But now with possible showers forecast for tonight I might just push it up to this afternoon.
Its pushing my luck to bale up hay that is too damp but its a gamble leaving it out there to almost surely get rained on again and lose more quality. Hopefully it will be just light showers, less than a millimetre for those that favour the metric system. (Not me)
Posted by Ralph Goff at 12:18 PM 7 comments: