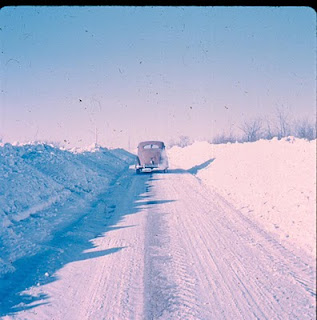 Snowmageddon,well thats what they are calling it down east anyway. And the news footage from the last few days does look pretty impressive. Long lines of traffic stalled on the highways in deep snow and people stranded in their vehicles for up to 24 hours. You wouldn't think this could happen in Canada where we are used to this kind of weather.
Not so bad here in Sask. where we received more snow on top of the above normal amount we already had.
It the link works you can watch a short video I shot while plowing snow today. Farmers love to plow, be it soil in the summer or snow in the winter. Theres something satisfying about watching the snow roll off the angled blade up front of the 2090 Case, almost like soil turning over behind the blades of a tillage implement.
Its getting really deep in the fields for the time of year. The oddest thing is that the ground under the snow is not frozen, something I don't ever recall seeing at this time of year. Normally that ground is frozen solid and will support whatever weight we put on it. Today I was breaking through the surface in places and saw mud under the snow.
Maybe there is something to this global warming/climate change talk.
Its certainly a change from this photo I took back in February of 1971. The municipal graders had pushed through with the v plow up front and a wing on the back to angle back the huge ridges of snow. That 39 Ford stood pretty tall but there were places you could not see over the snow ridges when sitting in the drivers seat. Yes, winters were tough when I was a kid....
Posted by Ralph Goff at 8:05 PM 4 comments:

I know the lazy farmer likes White tractors.
Posted by Ralph Goff at 7:20 AM 1 comment:

The Trivial Round, The Common Task 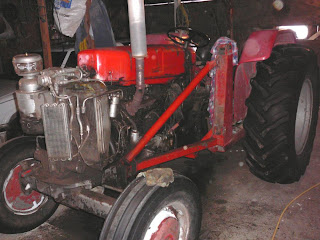 A quotation from one of my ancestors when he was pretty much saying
"business as usual". Thats about how its been here.
My old standby, the Massey Super 90 has been in the workshop for the past
week due to a water pump failure. I was lucky to be able to get a new
(rebuilt) one without too much trouble but I've had to use the bigger 2090
Case and it's dozer blade to put round hay bales out for the cattle which
works ok but not as handy as the front end loader on the Massey.
I've just about got all the pieces put back together to use the Massey
again. Had to burn a little furnace oil to get the shed warm enough to
work on it though.
I was a little shocked to find that magpies had literally pecked a hole
in the back of my poor decrepit old bull the other day. He is too slow
and quiet to shake them off and they just perch on his back and help
themselves. Normally I won't shoot a magpie but this was too much. I was
able to put a patch on his back with some cloth and some carpenter's glue
which I was surprised to see still in place 24 hours later.
The magpies come to eat leftover chop out of the feed trough but any
time I got close enough for a shot they would fly off. I finally set up
a "snipers blind" in the hayloft with just a narrow opening for the rifle
barrel leaving me completely hidden. In a couple of hours I had eliminated
5 of them and thought that was about all. This evening I see there are
at least that many more back again so I guess its back to the shooting
blind tomorrow.
Posted by Ralph Goff at 6:50 PM 4 comments: