If I'm Here It Must Be Raining

And it is raining pretty good today. I've been busy as usual trying to keep up but its a struggle. One job not finished and the next one needing to be done.  This was a week of grain hauling. I'd built up quite an inventory and suddenly decided it was time for it to go. With the uncertainty of grain markets due to tariff wars, GMOs, etc and other excuses, I was pretty sure prices were headed even lower. Thanks to the 108 horsepower vacuum cleaner we loaded a good many semi loads from Monday to Thursday and emptied at least 12 bins if I recall right. No grain dust to breathe and less back strain compared to the old fashioned  way of moving grain.
Crops looking pretty good thanks to the rain that finally showed up just in time. Patchy canola fields due to some poor emergence but they are filling  in and will make a decent  crop.
I need to be hitched onto the haybine cutting hay as it matured a bit early due to lack of spring rains. Although with today's soaker it is just as well to be still standing and not rotting in the swath.
Weed spraying is late of course. My canola will only get one application of Roundup but it was not bad for weeds compared to some years. Still got a field or two of oats need spraying for broad leaf weeds but that won't likely happen for a couple of days now as it is mud everywhere. I saw 20 mm in the gauge this morning but have not checked it since this afternoon's downpour. Got to be well over an inch now I'd guess.
Somehow I managed to work in a short crop tour to the hundred acre woods with the Merc last weekend. Got a bit of drone video of it.

Its been a challenge, as usual, trying to get crops sprayed on time. Well no chance of being on time any more but I'll get them done eventually. Wind blows like a hurricane some days so nobody in their right mind will run a sprayer and blow herbicide all across the country (and his neighbour's crops). We finally got a decent day yesterday and I got all of two tanks of heribiced sprayed on wheat. Might have made three but a front tractor tire developed a bulge that threatened to leave me stranded if I kept driving. Thanks to my "pit crew" we had a new tire on and rolling again about 3 hours later. Not easy changing a big 11.00x16 tire on the farm without benefit of proper tire changing equipment but we got it done.
Today, clouds and threatening rain means the sprayer gets a rest and I get to catch up on a few jobs that I haven't had time to do. As usual time flies when you are trying to do too much. I did take time to take this photo of a nice sunset last night. Actually I didn't take any time as I kept rolling right along as I took the picture.. Talk about distracted driving! 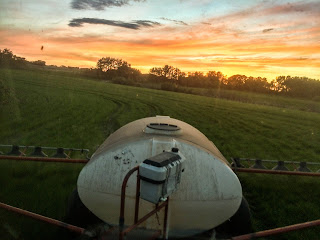 Wheat looks good from the ground but a drone view from last Saturday makes it look a bit patchy.

When its too windy to be running the sprayer (frequently), to avoid going crazy watching and waiting on the weather,  I spent some time trying out the spot weld cutter. Up til a few weeks ago I never even knew what spot weld cutters were. Its almost a necessity for repairing old car bodies. In the learning process I managed to break all the teeth off the first one before I got all the spot welds drilled out. Second attempt with new cutters went better. Or maybe I was more careful or learned the right technique.
Its not a "how to" video. More of a "how I did it".
Then a little, or a lot, of work with body hammer and dolly and the badly dented hood on the 52 Merc is starting to look a little more presentable. No, the truck in the picture is not the 52 Merc but it looked so good that I had to use it in the video.
Actually a lot better but still far from body shop standards. The price was right though. To be continued.

Posted by Ralph Goff at 6:50 AM No comments: