Continuing hot and dry in Sask. so what better to do than take the day off , take a vintage tractor to a parade and run a threshing machine. Surprisingly the heat didn't bother me much. Not seeing a thermometer I can only guess it was 90 degrees or better. Keeping busy sometimes helps me to ignore the heat. The old Cockshutt 50 handled it ok without boiling over or running out of oil. Parade was easy enough but requires a lot of attention to not run into the vehicle in front or the people running out to pick up the treats thrown out by the leading vehicles.
In contrast to my usual parade videos, this one will be a view of the crowds sitting and parked along the way, watching us go by. Different anyway. One drawback, you don't get to see much of what else is in the parade when you are driving in it yourself.
Threshing demo right after dinner and that was what the old 50 had been requested for. Few tractors have a belt pulley anymore and you can't run a threshing machine without one. I'd never run a thresher before but no problem. Being the "engineer" I only had to line up and tighten the tractor into the belt , keeping an eye on the gauges and making sure my end of the operation is ok. They had a thresher man or two watching the separator (thresher) and they had to signal me to shut down once when the grain elevator belt threw off.
Then I initiated a brief shut down when I remembered I had not checked the engine oil in the tractor. Knowing the 50's appetite for oil and leakage problem I figured it would be good insurance to throw in a litre of engine oil.
There were enough interested by standers to man the pitchforks and feed the sheaves into the separator.
That starter drive on the tractor took a beating. Always temperamental, it takes quite a few tries (and grinding) before the starter actually engages. Although it only takes a turn or two to start the engine.
I had a few comments on how smooth and quiet the 50 was but in reality it has a rough idle and top end speed that I can't iron out to my satisfaction.
The sheaves had been in storage in a barn for about 13 years so were well aged. The wheat looked surprisingly good for colour although a little frost damage (2004 crop).
Video coming up when I get it edited and uploaded. 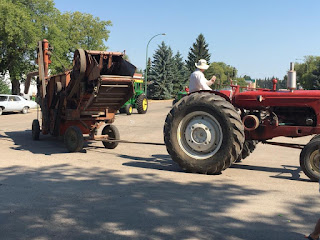 Messing About With Old Tractors

Reminded me of a quote from the Wind In The Willows although I think water rat was talking about boats when he said, "Believe me my young friend, there is nothing half so much worth doing as messing about in boats".

There was a purpose to this recent activity with old tractors. The Ford tractor way in the back of the shed was going on it's last long ride and the Massey Harris was in the way so they both needed starting. After maybe 14 years of rest it took a bit of persuasion but it was not long and they were running. The old Ford moved under it's own power onto the trailer.

And no, the tractor is not going to China as scrap iron as to much of our old iron does these days.. It is headed to the U.K.

It was too hot to bale or work this afternoon at 90 degrees but I went out about 5:30 and gave it a try. It worked well so I went on over to the hundred acre woods and baled up all the hay swaths I had turned this morning with the rake. Bouncing around the rough old yard of Winstanley Grove. No buildings remain but the collapsed walls of the  house can be seen  down in what was the cellar of the house. The concrete footing of the barn sticking just high enough out of  the grass to give a  real jolt to any wheels that  pass  over  it. Grass  sure grows thick and  tall there even in this dry summer.
Its nice to get dry hay but the wheat and canola is  starting to show the stress of this heat and  lack  of rain. Hilltops are turning light (burning) and probably won't have much grain in  them.

It looked promising  this evening at  sundown as I baled. Clouds in the West. Radar showed some measurable rain to the West and North of me but it eventually split up and went all around us. Its like this area  has some kind  of rain  repellent lately.

About time for  a blog update but its late in the day so I'll just post this video of one of my wheat fields from the weekend.

Crops still looking pretty good in spite of the continuing dry weather and lack of rain. Complete turn around from last year when we couldn't miss a rain and wished it would stop.

I went out with the haybine today and cut a few more patches of hay as my normal hay patches did not yield what they normally do.

Cattle In The Summer

They have all the grass they can handle but they never refuse a pail of oat chop. I give them some every morning as it saves me having to go out in the pasture to check on the cattle. This was just some video I shot while walking  among them. It was near 80 degrees at the time and  I was thinking back to  the video I shot in February , or was it January, when it was way below zero degrees. The cattle have lost their winter coats now  and look smooth and shiny. Flies are a pest and the cattle spend some time in the shelter some mornings as  it seems to be a little less fly infested. Or  they think so anyway. Very few mosquitos this year which is a  nice change. Probably due to the dry conditions. It used to be a common practice to light a "smudge" for the cattle in the evenings. An old straw bale, partially rotting or wet made a good source of smoke to disperse the mosquitos. The cattle knew it and came to stand  in the smoke. I guess we were adding  to the carbon footprint even in those days.

I've done videos of haying most years lately and here is the 2017. Nothing too new here but it was mostly shot in evening and night time due to the dry conditions. This baler does not work well if the hay is too dry.

I think I can almost remember sticking this oil change sticker on the door post of the 52 Mercury. The date scrawled in my own hand writing is July 1967. I guess my dad wanted to give me something to do to keep me busy while he was doing the actual work of changing the motor oil in the car. I see instead of recording the mileage I wrote down the brand and weight of the oil. (BA #30). Chances are the odometer had already quit working by that time anyway. 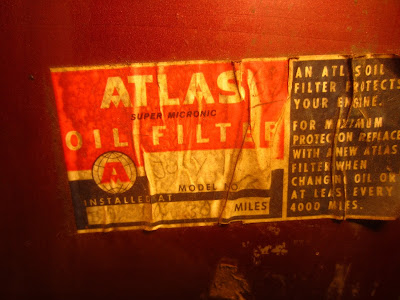 In other news I've been cutting hay. A little bit earlier than some years but the grass is further advanced and going to seed due to the lack of rain here. Its a short thin crop and in places I can hardly see the swath behind the 9 foot haybine. I covered a lot of ground cutting more area than I normally do but will likely have less hay than other years.
Canola is blooming but it is short and not looking great. Heat and wind while its blooming will cut the yield down. So far the temps have been moderate. The boys on agriville are already forecasting doom and gloom for this year's crop in most of Sask. On the positive side it is pushing the price of wheat up. Unfortunately I sold all I had left before the last big increase. Still a good price but not as good as today's.
Still hoping canola will do the same thing.