January 30, 1971, my grandmother, Mary Goff (Lane) died. Aged 85 (we think). I know there was some question as to her actual year of birth. Along with pretty well everything else about her prior to coming to Canada in 1911. We do know she worked at various locations along the south coast of England such as the Railway Hotel at Broadstairs, Kent. 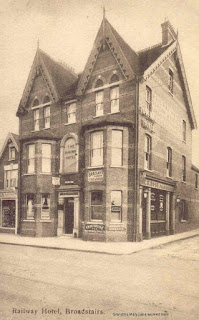 This is the only existing photo of her before leaving England. 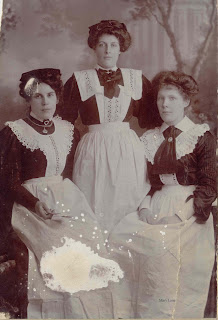 Grandma in work uniform on the right 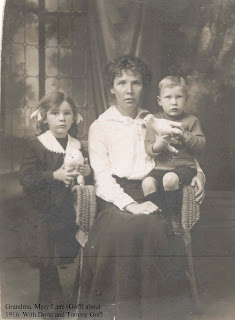 With her first two children, Doris and Tom. 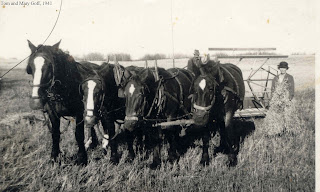 Working hard on the farm through some hard times. 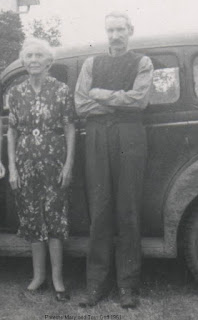 Grandma and Grandpa about 1951. 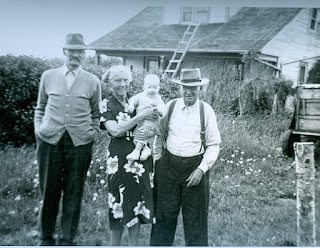 Out With The Dogs

I shot this video while "dog sitting" for a few days last summer. A hot morning in July but those two dogs were always eager to go for a walk, or run, to explore their territory.

According to their records I have been on youtube as Roosty6 for ten years on Jan. 26. It does not seem like that long but considering there are 382 videos on my channel I guess it has been a while. I like to think the videos have improved a little since the very first one I put on. It was a short clip of converted VHS video from 1989. Fuzzy focus and grainy video of my old 72 IH Scout and me taking a little spin down the driveway. I don't recall how long it took to upload on dial up internet in those days but it would have been a long while I think. So much faster these days on wireless internet.
I've learned a lot and met some interesting people on the channel.

Took a break from the floors today and decided to investigate the source of the disturbing grinding noise coming from the back wheels of the car. I was afraid it was from the differential but hoped it might just be in the brake drum. A broken differential would relegate the car back to parts car status. Good used diffs are likely few and far between for a 64 year old car. New repairs likely very expensive.

So its good news and bad news. The good news, the noise was just a loose rivet head inside the brake drum and that differential is just fine. The bad news, the drum was so hard to get off that I cracked a couple of chips out of the flange around the outside of the drum. It won't affect the braking surface and might be "fixable" with JB weld. Also the brake shoes are worn beyond redemption.

I was able to discern the numbers on the diff. Its not the "stump puller" 4.10 ratio. Just the standard 3.90. Seems fairly tight and smooth operating, better than the 52 in fact.

I was also able to fix the left rear door that was originally bolted shut by a previous owner. It just would not stay shut otherwise. I was able to loosen up and adjust the hinges as well as the door catch. Result, the door now opens and shuts as it was meant to.

Making a little progress replacing the rusted floors on the 53 Merc Not a "how to" video. Just my crude methods of low budget floor patching.

Shot some video yesterday showing the worst of the rust on the "new" 53 Merc. There is not much good steel left under the front floor mats. Nothing that I can't patch up though. Not many years ago a car this rusty would have been designated as a "parts car" and stripped down to pieces for other restorers. But as the supply of fifties Mercs dries up even an old sedan like this one is worth keeping intact I think.. No, its not going to be a restoration show car. Just patched up good enough to look good and keep my feet from hitting the ground as I drive. (Assuming I ever get the engine unseized and running.) Really, from the rocker panels up the car is pretty much rust free. Its just 3 years ago that I was working on the same problem on the 52 Merc. In fact it had worse rust than this one. And now its a driver! Amazing what some stove pipe metal and sheet metal screws can do. It gives me hope for this one.

Posted by Ralph Goff at 7:54 PM No comments:

Looking Back At Summer Driving

-18 F here this morning with a wind chill factor in the minus 30s. So I put together a few clips of driving the 52 Merc in the summers of 2015-16. With a little extra help and outside camera views.

Cool Drink On A Cold Day

While the truck was warming up for a quick trip to town on the coldest day of the winter (so far) I ran up to the barn to run some water for the cattle. They seemed to be handling the cold well. Out in the sunshine in the shelter of the trees it was not bad. The cats did not venture out of the barn where they had been holed up for at least a week.I've picked up several new subscribers to the youtube channel since being mentioned on R Peek's channel. He is an interesting guy that keeps a steady stream of videos uploading to youtube. Messing about with old vehicles, clearing snow, playing banjo, etc. Check him out on youtube sometime.I shot this with the Gopro on the chest mount harness so I could work hands free.

Just another entry in the ongoing 53 flathead project. It was a bit of a challenge finding those last two bolts on the oil pan but with a little help from facebook flathead guys I got it done. Other than a few spider webs I found nothing too concerning inside so far. The pan was cleaner than expected. Some old flatheads accumulate a lot of sludge over the years (no pcv) but not so much on this one. No serious rust either. Now a little more soaking with penetrating oil in the cylinders, this time from the inside, and maybe it will break free (without breaking anything else).

Posted by Ralph Goff at 9:05 PM No comments:

Its been a while since I removed an engine from a car/truck so at times it was like re-inventing the wheel. Though I 'd have to say it went pretty well so far. No self inflicted injuries or collateral damage to the vehicle. Got the old flathead V8 out of the 53 Merc and hanging on the hoist so I can clean off some of the past 65 years accumulation of baked on oil and dirt. The little three speed manual transmission does not look very heavy as it hangs supported on the steering rod. I think I can lift it out myself if I have to but no hurry on that. It is either very low or completely empty as no oil came out the back when the drive shaft pulled out.
Some video of the operation here for those that are interested in this sort of stuff.

As we are three days into the new year (2018), this will be the first blog post. We have just come out of the approximately ten days of below normal temperatures finally getting above zero farenheit for the first time yesterday. A noticeable improvement. We survived the extreme cold but I had a couple of incidents with frozen water lines needing thawing.
Had the traditional family gathering for supper here on New Year's day. It is the one day of the year when this old house is almost too small but we made it work. 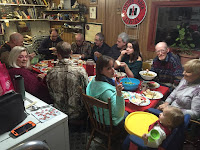 Now that the weather has warmed up I felt inspired to do some serious work on the "new" Merc. Got the seized up flathead almost out of the car but I had to leave it hanging on the hoist as I ran into a little problem and didn't want to work overtime. Seems I forgot to support the front of the transmission or disconnect the speedometer cable. No harm done but I need to find a chain to hang up the front of the transmission before I can push the car away from the hoist. Tomorrow is another day and I have a plan.

Posted by Ralph Goff at 6:34 PM No comments: