Finally able to unhitch from the sprayer a few days ago now that in crop spraying for weeds is done. Good (lucky) timing as the heaviest rain held off til a few days after I finished. Crops are in pretty good shape here and growing well.

Hitched up to the  haybine now in hopes of cutting some hay.

Some common sense comments from the man behind the youtube videos. Very articulate and informed. Trying hard to educate the general public that does not have a clue where their food comes from or what is involved in producing it.
Posted by Ralph Goff at 6:48 AM No comments:

The Sixth Of June

June 6 always means "D Day" to me as it did to my dad. He missed out on it by about a month but did get over there in time to see the devastation left of the battle. Burned out Sherman tanks and dead bodies of animals (and a few humans) were quite the shock. He said he did not have much hope of ever getting out of there alive. Somehow they fought their way through the next months til the war ended in May of the next year.
I've posted some of his memoirs here over the years but have been pretty slow at posting the rest of them. I am lucky he wrote down his account of his journey and saved photos of the places he was and the people he saw along the way. This photo was taken on Wangerooge island after the war ended. Dad at centre and Alec Abel on the left. I got to meet Alec in later years. 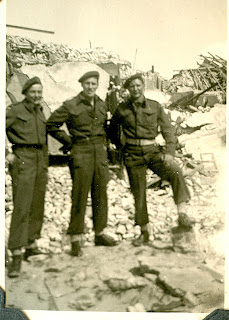 In other news, last fall's harvest is done as of a week ago today. That dry dead straw just disintegrated going through the combine and the wheat was the driest I've ever combined. It won't be worth much, just a little less loss in a poor crop year. And here is the video.

Probably not news that the wind is still blowing like a hurricane trying to tear everything loose. We did get one nice quiet day this week and it was yesterday. I went at it as hard as I could and managed to get two fields of chem fallow sprayed. Might have done more but heavy fog made for a late morning start and the 30 miles of road driving, at 14 mph, used up a lot of time.