There is no GMO wheat !  At least none is grown commercially.
I am sick of reading mis-information every day spread by people who base their opinions more on a belief or a feeling, or hearsay, rather than fact. To blame their health problems or all the problems of the world on genetically (GMO) modified foods is just getting tiresome. I could just avoid reading or listening to it but in fact those misguided opinions carry a lot of weight with the public and influences their buying decisions to the point that apparently 56 percent of Canadians are cutting down on foods that contain wheat. Since I still depend a little on making a living growing wheat, this is not good news.
Maybe some day science and time will prove me wrong but I have yet to hear any concrete evidence that food containing GM products has harmed anyone's health.
Apparently GM varieties of wheat have been produced but not released for commercial production due to fears that the public would reject it. Probably a wise decision. Just google "triffid flax" to see how well that worked out.
There is talk of developing a GM variety of wheat that will be resistant to fusarium and other fungal diseases. If they can produce it with proof that there are no health risks to consumers, go right ahead Fusarium is decimating our wheat crops here to the point that it hardly pays to grow it anymore. Spray my wheat with a powerful fungicide to fight fusarium you say? Is that really any "healthier" for the end user than growing a variety that is genetically engineered to resist the disease?.
I am hoping to watch this program re: Wheat Belly  if I can handle it. 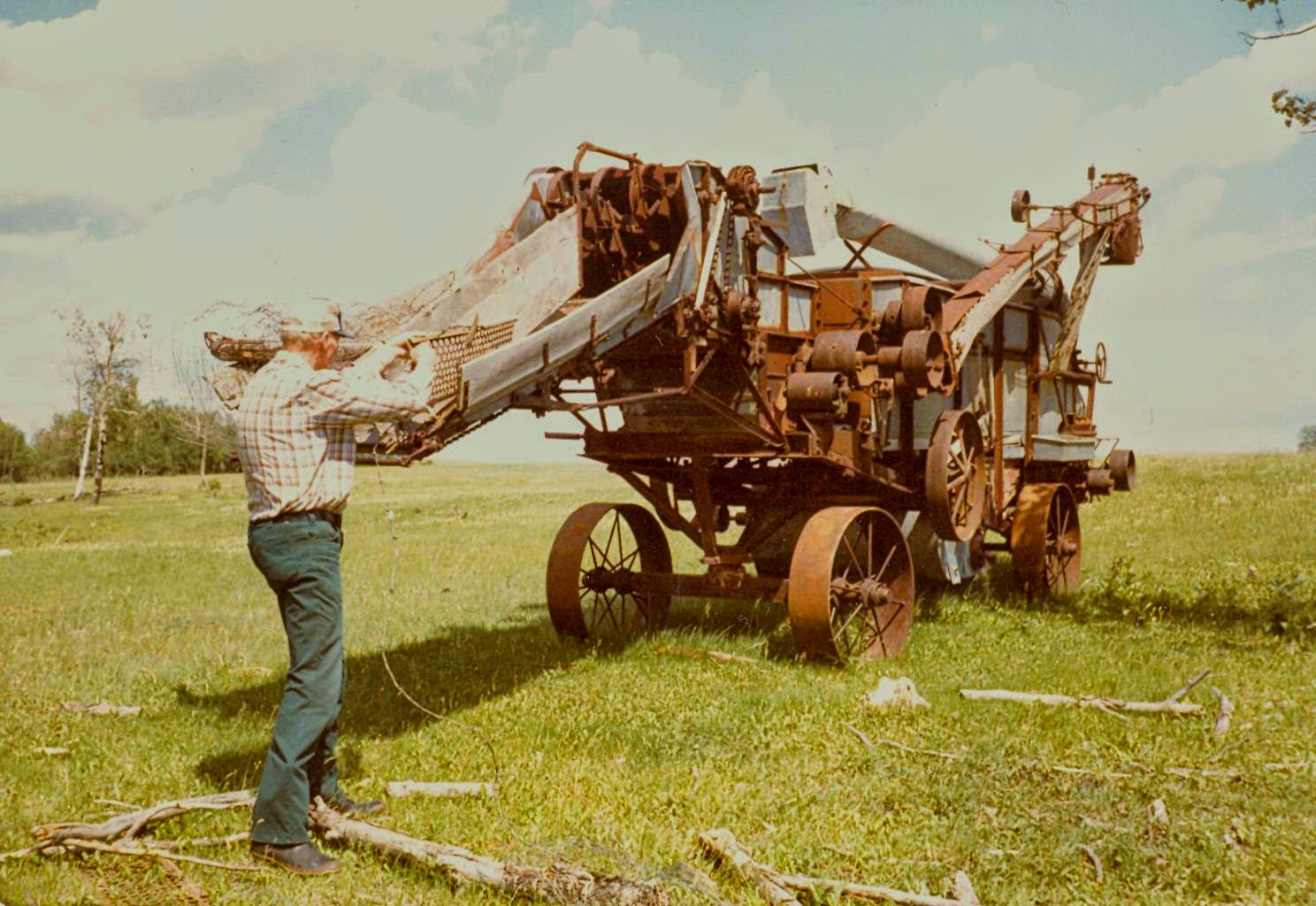 My dad used to talk about his Uncle Alf's home made wine and how good that rhubarb wine tasted on a hot summer day. It had quite a "kick" to it apparently. I found this entry in a 1915 note book and de-ciphered the hand writing as best I could.
Maybe some day I'll try it out.

Rhubarb wine
Gather the rhubarb in the middle of May, take off leaves, wipe it with a wet cloth, put it in a large wooden tub and bruise it well with a mallet or rolling pin.  When reduced to a pulp, weigh it and to every five pounds add one gallon of cold spring water. Let this remain for 3 days stirring 3 or 4 times each day. On the fourth, pass the pulp through a hair sieve. Put the liquor into a tub and to every galllon add 3 pounds of sugar, stirring til quite dissolved. Then add to every gallon the rind of  a lemon. Let the liqour remain in the tub from 4 to 6 days. The fermentation will begin to subside and a crest will form which should be skimmed off. Put the liqour in a crock and if it still ferments pour it off into another crock and in a fortnight stop it with Isinglass, half an ounce to a gallon. If the wine is not quite sweet enough add a little more sugar. Take care that the crock is full. Bottle the wine in February or March and in the summer it should be fit to drink.

Mangold Wine
Wash and pare the mangolds. Cut in slices and to every gallon of fruit add  one gallon of  water. Boil for three hours at least with one ounce of bruised ginger to each gallon. Strain and as the liquor is diminished by boiling make up the quantity with boiling water. Add three and a half pounds of Demerra sugar to each gallon. That gives it a rich colour. Stir well as the sugar takes a good deal of melting. When cool to just warm add a little yeast and bottle next day. Let it stand four months. March is the best time to make it. About one ounce of cloves to each three gallons boiled with the wine is an improvement 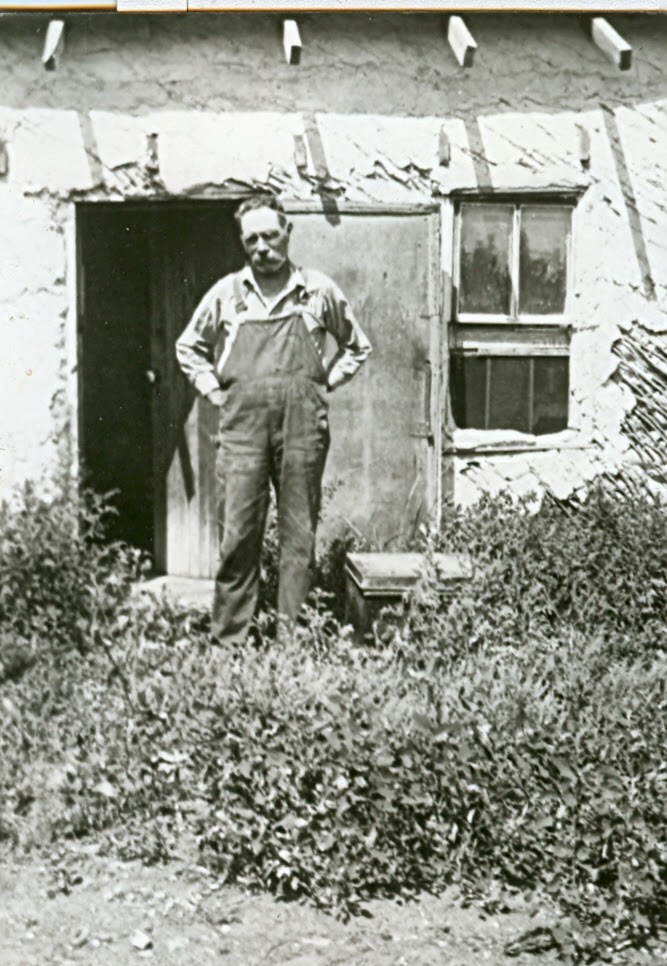 Alf Goff by his cabin. There are likely a few bottles of home made rhubarb wine in the cellar.
Posted by Ralph Goff at 5:21 PM 2 comments:

Its not hard to get up before the sun in winter time in Sask. but today I was on the road long before sunrise, if in fact we could have seen the sun rise. It was snowing and blowing some and did not look too favourable for the job ahead but after numerous cancellations due to weather it finally got done today. Two semis of canola headed down the road by 11:30 am .
We are a little below normal snowfall but you would never know it by the amount I had to push to get to the bins at the "hundred acre woods". A good two hours of blading and piling. Numerous trips back and forth down the winding trail through the woods to make it wide enough for long trucks and trailers to get through. A bigger blade would make the job go faster but then I would also need a bigger tractor behind it.
Comfortable working at these warm temps (in the +20s).
Heres a shot of the last truck headed out in the distance while I wait to cross the highway with the grain vac. 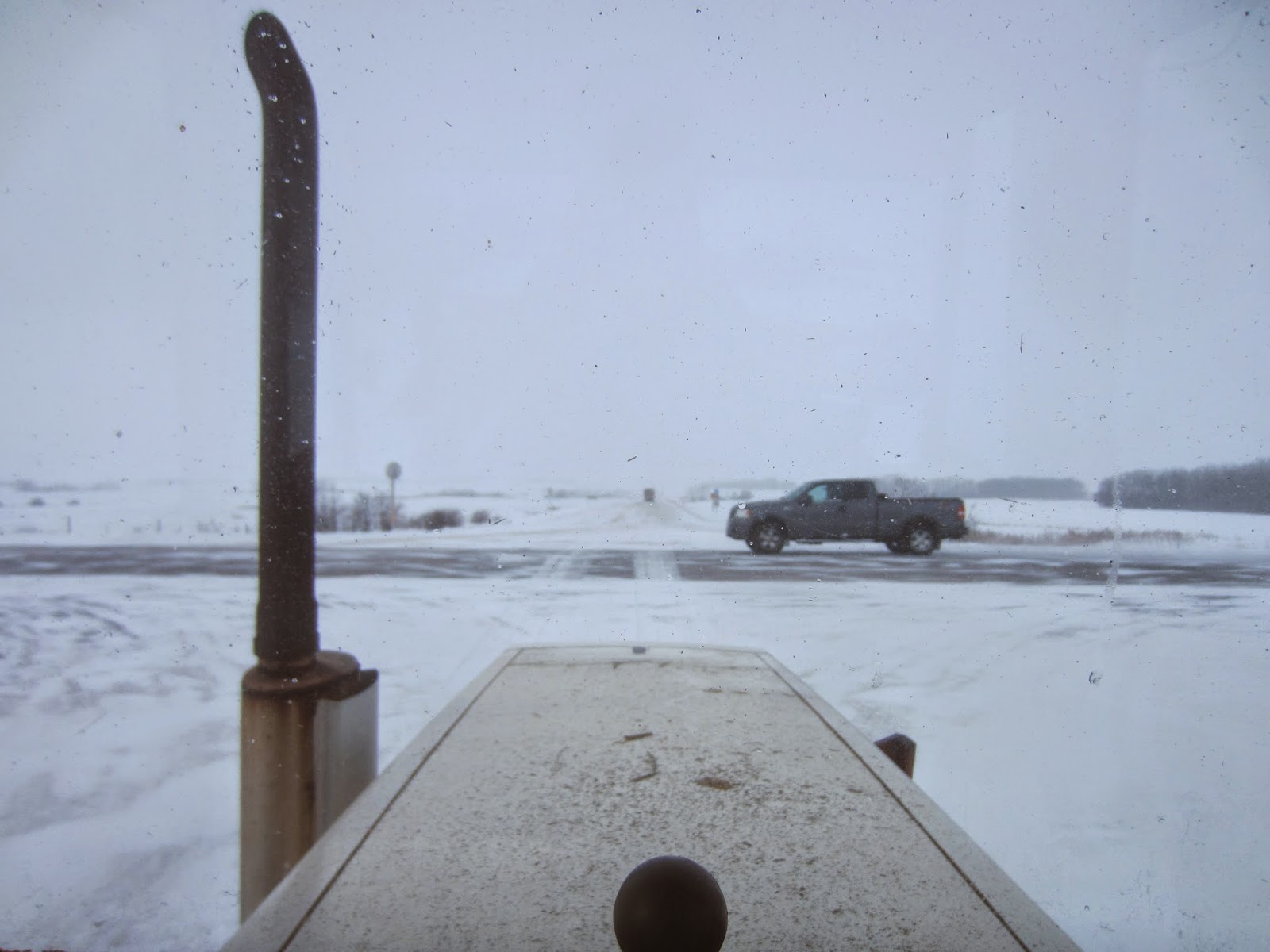 Dear Auntie and everybody. Just a few lines thanking you for your welcome letter but it was very sad. We are glad Uncle never had to suffer. Mother used to often say she wished he had someone to stop with him. It was a blessing he had you so close. I should like a photo.
What you spoke about in the letter won't affect mother's pension. Do you go in to Lipton for burial? We often wonder. There was a small piece of paper in the letter with numbers on it.  Was it the burial number?
Mother is about the same. Doctor told her if he could only put spare parts in it would be alright. She is weak. I am doing my best, you can't do any more.
We have had Les to see us. And his chum. They slept here one night Rene brought them down. I think they are stopping longer next time. What a fine chap he is. Lovely head of curly hair and white teeth. Frank was in bed with lumbago. He gets it bad sometimes.
Mother is happy now she has seen Les. She wishes she could see Grace and Ivy.
Before we heard from Aunt Alice about Uncle Alf, his photo dropped off the sideboard. Mother said, "he is dead". She told me a week before he was gone. She said she seen some man walk round her bed.
Its a wonder Jack or Uncle Tom didn't go over to see what the dog was howling about.  We got a stray one. We took him in at Portesham and had him about 11 years. He is a faithful thing. No one can coax him away.
I was looking at your photo today. How you have altered but its still Aunt Kate. I often think about how you used to come to Winterbourne and I used to plait your hair.
Mother has given Leslie Grandfather Goff's watch. He is a nice lad, quiet.
Hope this will find you better and getting over the shock. It upset mother at the time. She is weak in the legs. Doctor said she is very tough.

So now I will say goodbye from your loving niece,  Lottie. 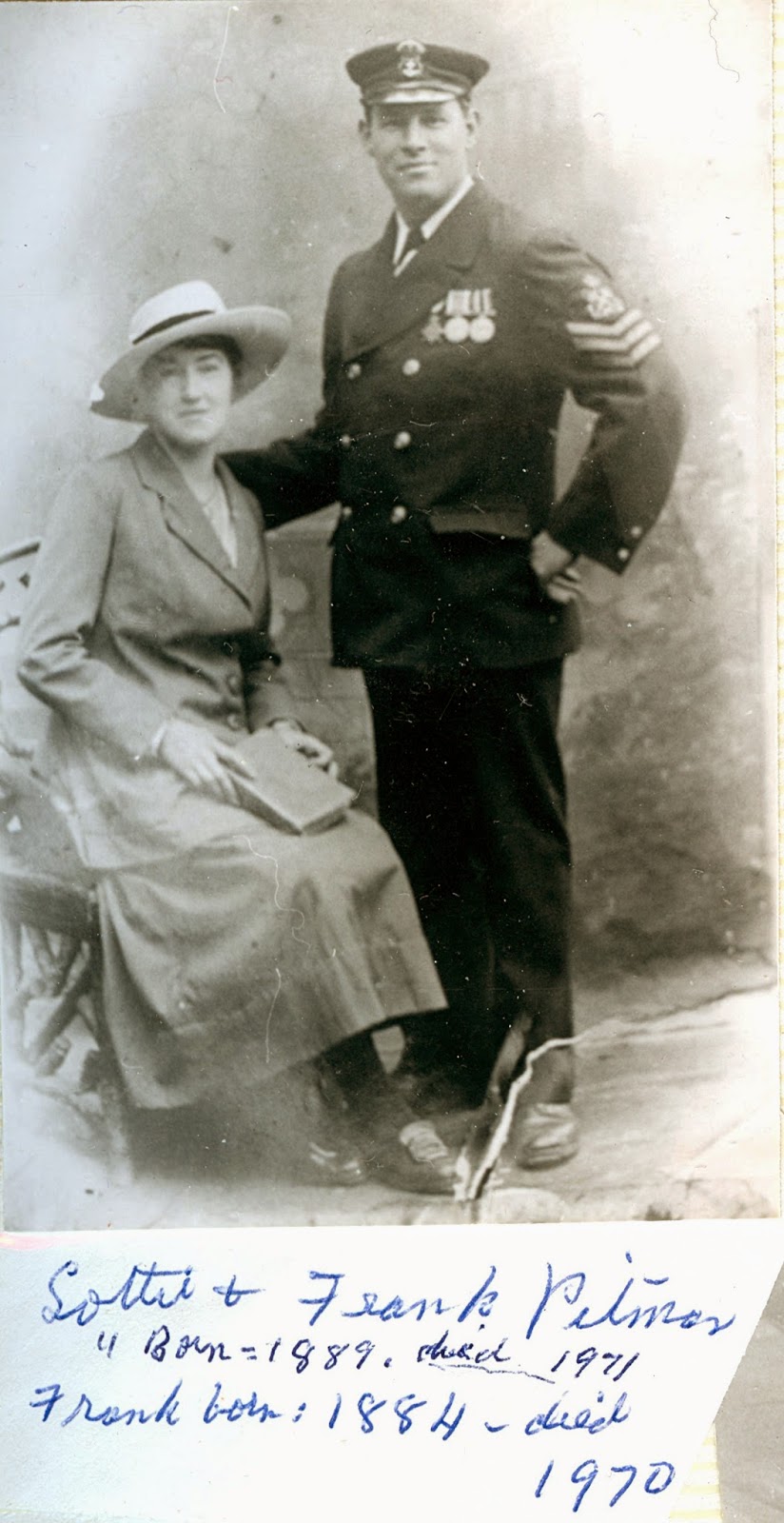 February 2 is traditionally known as groundhog day. The day when this large rodent ventures forth from the snow covered frozen ground and gives us a clue as to how much longer the winter will last. depending on if it sees it's shadow or not.
We don't have groundhogs here in Sask. and if we did they would be hibernating beneath the deep frozen ground knowing there will be nothing for them on the surface but cold and snow for the next month or two.
In family history it is also the birthday of great Uncle Alf Goff. Born in Chetnole, Dorset in 1870. He got out of Dorset in his 20s and sailed for Australia where he worked on a sheep farm for a few years before returning to England . Not for long though as he and his younger brother Tom then sailed for Canada and spent some time working on the railroad and threshing crews eventually returning to England. They must have liked Canada though for they returned to take up a homestead in 1903 in the land that would soon become Saskatchewan. Alf farmed full time until he died at the age of 72 in January of 1942. 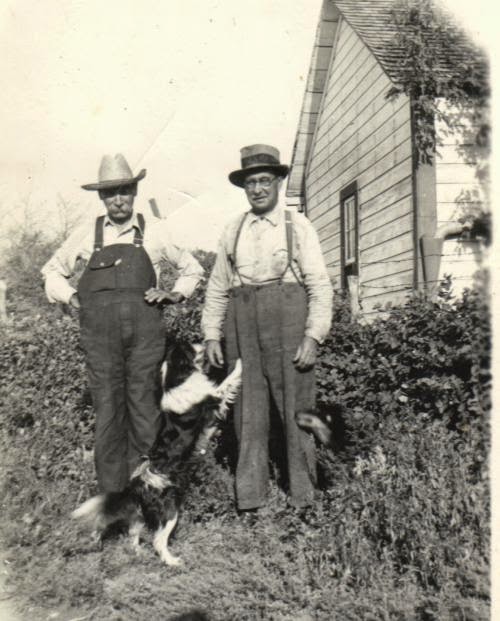 Alf with cousin Jack who lived and farmed next door . 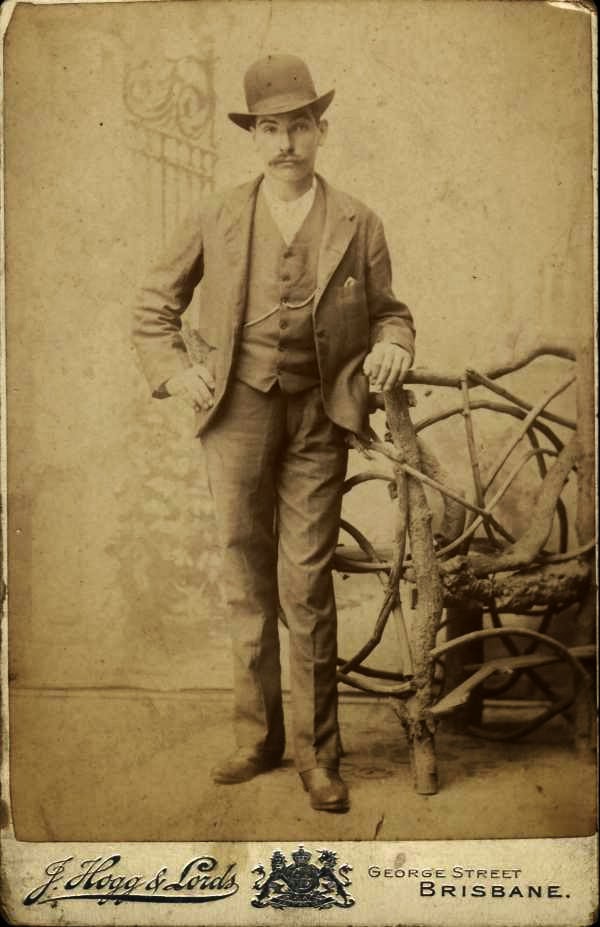