I borrowed that title from the CBC phone in program today where they asked the question , "are you a winter warrior or a whiner?" Inspired by the continuing cold and colder to come weather here I guess. This little calf has to be a warrior to survive. He was born in the dark, cold early morning hours last Sunday morning in the open front cattle shelter at sub zero temps. Lucky he had a good mother who was right on the job drying him off and preventing his ears from freezing in the cold conditions. He spent the first five days pretty well all inside the shelter, which was the best place considering how cold it has been . This morning , with sunshine and wind chill factors in the -30s he was out and running around, looking right at home in the cold weather.
I consider myself a reluctant winter warrior since I really don't like the extreme cold but have to get out there every day to feed and water the cattle.
At least we humans know from past experience that this extreme weather will pass and soon enough it will be spring. That calf has known nothing other than frozen ground and snow, cold and wind.
The forecast is for near record breaking cold weather tomorrow night. I am starting to hear a lot of complaints about the severity and duration of this winter. I guess its not just me.
Posted by Ralph Goff at 12:46 PM 1 comment:

That is what the headline  is today anyway and I believe it. Daytime highs in the 0 to -10F range with wind chill factors way down into the -30s it is cold even for Sask. Not great weather for starting machinery and hauling grain but then that is not a problem since no grain is moving. The railways apparently have better things to do than haul our grain.
I shot this video last week on the way to town. Rather than start the tractor and snow blower I just powered through the drifts in four wheel drive. Forecast is for another ten days at least of this extreme cold. The Polar Vortex is not letting up just yet.

What Would Jack Say?

That question came to mind a while back whilst contemplating the price of cultivator shovels and diesel fuel. Which have both reached levels that make it questionable how we even turn a profit at this farming business. My dad used to tell the story of how his Uncle Jack was out to the farm to visit one day in the early 1950s. Dad was proudly showing him his new cultivator. Of course Jack was curious as to the price of this machine. Seems to me it was in the $700 range. When Jack heard that he was a little shocked and replied that when he was farming he had bought a cultivator for $75. I wonder what he would say about the price of machinery today? Actually I can pretty well guess. 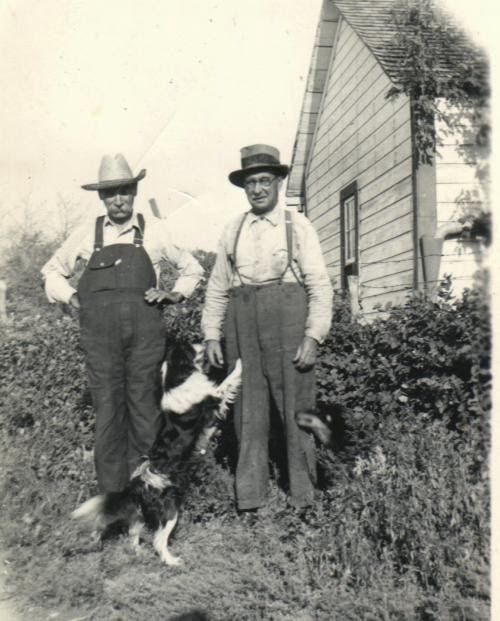 One thing about this cold winter weather, it gives me an excuse to work on indoor stuff like this vhs video conversion to digital. Nice to look back on hot sunny weather. Although 1988 was a bit too much of a good thing. Spring started off fairly normal with good moisture for seeding but by the first week of June the heat was intense and unrelenting. I can't remember how much, if any, rain fell that summer but it could not have been much. The crops grew , but short and thin. If I had ever needed a direct cut header on the combine, that was the year. I did not have one though and it was my first year with the pull type Massey swather. A steep learning curve is how I would describe my first day with that swather in short barley. Once I got onto the depth judging and into a higher gear I was able to make good time and a reasonable swath. The swath being picked up in this video was spring wheat. I don't think I had ever run a combine that fast but there was so little material to put through that it required higher speed to keep the cylinder full and working.
The sound of the GM 350 at 2400 rpm all day long through unrestricted straight piped exhaust was very satisfying.The old air conditioning system worked well . The harvested wheat was very dry and good quality, just not a lot of it. And that same old IH Loadstar still trucks the grain. Now on it's fourth combine.
In other news, after watching this Gopro video I won't worry too much if mine falls off the machinery when I am shooting video.
Posted by Ralph Goff at 10:24 PM 3 comments:

I Need To Stop Reading The News

Really, news stories like  this one about a truckload of frozen dead coyotes  spotted in downtown Saskatoon recently. True enough, the driver made a poor choice to leave the load uncovered, knowing how it might offend the delicate sensibilities of some city dwellers. But then the comments turned into an arena for farmer bashing. Ranting on about spoiled rich farmers in their $75,000 pickups who spend most of their year on holidays and the rest of it shooting defenseless wildlife. Yes, it was just that crazy. Trolls no doubt account for some of those inane comments but I think there are also a few normally sensible people out there who just don't have a clue about life outside the city and off pavement, how and where their food comes from. And the ever decreasing number of us who are willing to put up with all the B.S. that is dragging farming down from the life style it used to be.
Don't believe me??? Well here is another site I always come away from feeling a little hopeless lately. Agriville is a discussion forum of mostly Sask. farmers. Younger and smarter than me when it comes to growing and marketing grain. The common theme there lately seems to me that we are finshed, Grain production in central Canada is no longer a viable option since the railways are unable or unwilling to move the grain to ports which apparently is why the price is so low here right now. That is a serious problem in a land-locked province like Sask.
Crop prices have been in a downward spiral since harvest and grain movement seems to be at a standstill. Diesel fuel has taken quite a jump up in price. Fertilizer, while cheaper than it was last spring, is now increasing steadily in price.
On the positive side, farm land prices are higher than they have ever been and outside "investors" are beating down the doors to buy our land. So there you have it.
In other news, the lazy farmer has snow. A little unusual for them.
Looking back in history to late 1972, from the old black and white photo album , hard at work on a new shed. 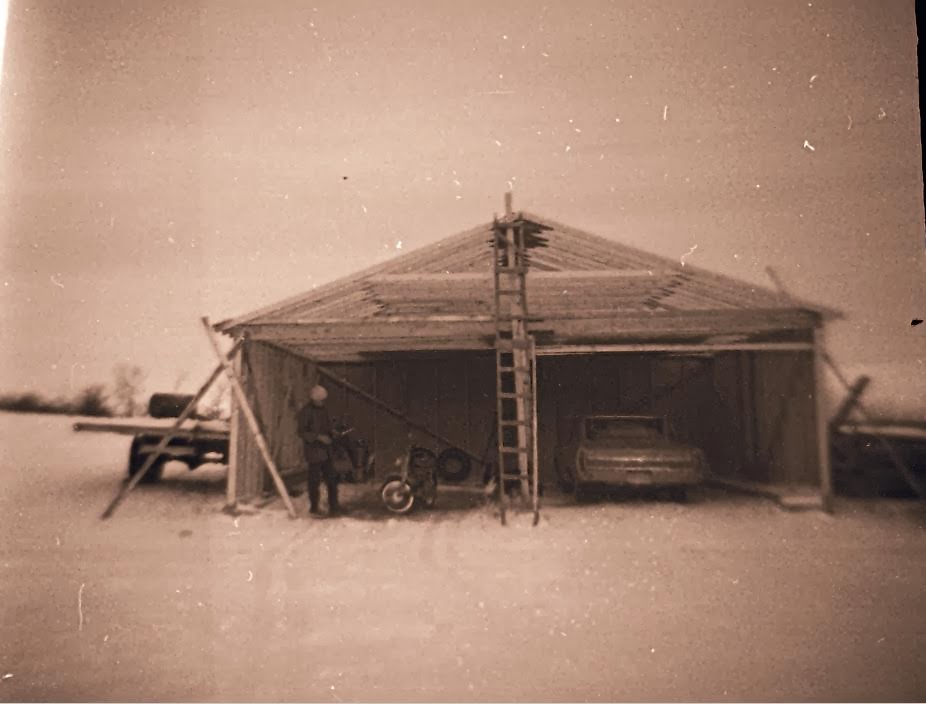 I'm talking about this one, blogger.com. For some unknown reason this morning it is telling me that I am not following any blogs. Therefore I can't see what is new on my fellow blogger's pages. Must be the cold weather affecting it. I've got nothing new here. Here is an old photo from about 45 years ago. I learned to drive on this old Ford. Had  a lot of fun with it. 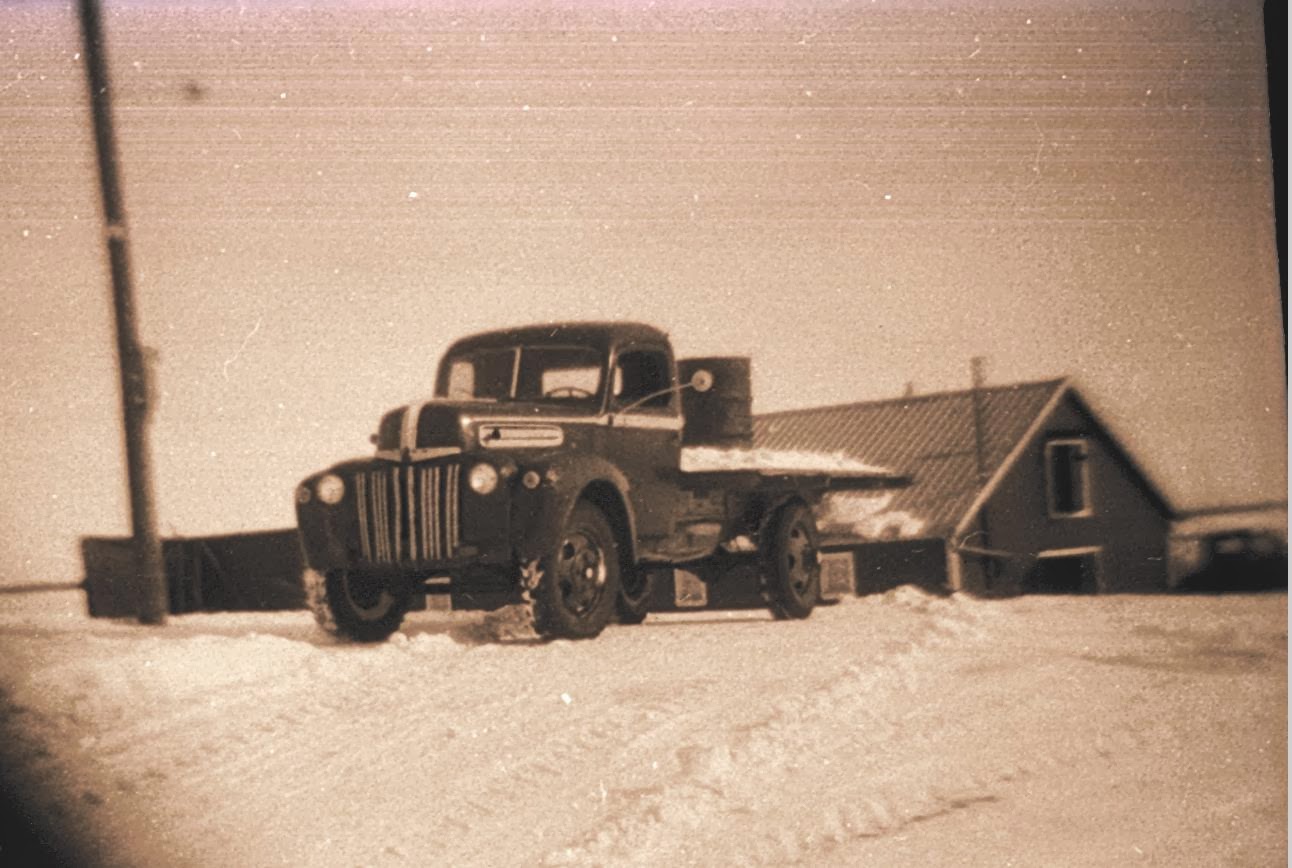