I guess it was a time when lotteries and gambling was illegal in this part of Canada, Saskatchewan. Nowadays they are a big source of revenue for the government but not so in the 1960s. My dad dreamed of winning "the Irish Sweepstakes" and would occasionally refer to something he needed to buy when he won the sweepstakes.
I don't know the procedure it took to acquire these tickets buy my aunt worked in the big city and had access to them. So my dad gambled a little in hopes of winning a lot. I thought of that recently while sifting through boxes of old papers (the kind of stuff most people throw away) and I found these sweepstakes ticket stubs that my dad had saved. Cost was one pound sterling each which I think was about $3 at the time. And that was quite a bit of money in the 1960s on a small farm.
I wonder if our lives would have changed  a little, or a lot, if dad had got lucky on the sweepstakes?
Most likely a new(er) car and a good line of farm equipment instead of the old "mechanics specials" he could afford to buy at the time.
Update: after a little research it appears the Irish Sweepstakes was a bit of a scam. Less than ten percent of the ticket sales went to hospitals. The majority seems to have gone to make rich people richer. Irish Sweepstakes 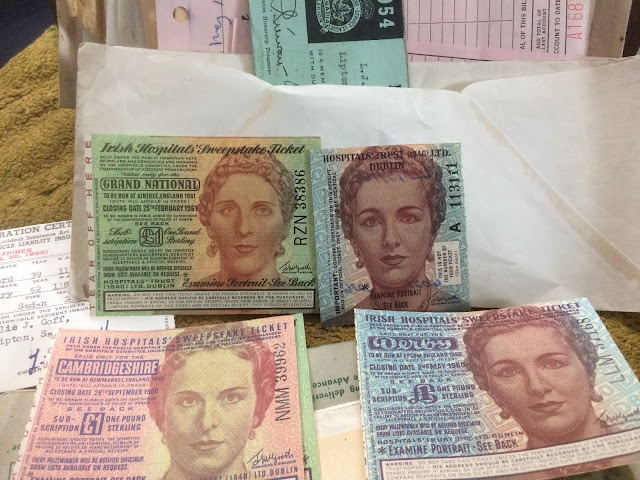 Email ThisBlogThis!Share to TwitterShare to FacebookShare to Pinterest
Labels: farming in the 1960s, Irish Sweepstakes, Saskatchewan

The "de-cluttering" fad keeps cropping up in interviews and articles I was thinking about it today as I was building a shelf to hold more clutter. Building out of salvaged 2x4 studs that I had saved by the way. Even the construction screws were second hand.  I guess I am far out from the trend as usual. I have no intention of de-cluttering. I need all that junk around me. Keep it long enough and everything has a purpose. If not for me then for someone else.
I don't think I have reached hoarder status yet but I'm always open to looking at more items :-)
So many times I have heard someone comment, " I used to have one of those and wish I'd never sold, gave, or thrown it away. I've only said that a few times and usually its a large item of machinery that I simply could not afford to keep around. Needed the trade in value. 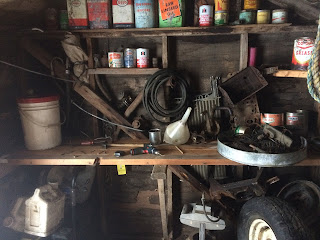 Just listened to a review of this book http://timharford.com/books/messy/ and from the brief summary I read, I should be a lot more creative. Apparently messy desks indicate a creative , responsive and resilient personality.
Posted by Ralph Goff at 7:34 AM 2 comments:

Roosty6 Works On The Merc

Doing a little more cooling system maintenance while the weather stays mild enough to work in the workshop without turning on the furnace. Its still plenty cold on bare hands touching cold cast iron but could be a whole lot worse this time of year.

It was a dark and stormy November 11, 2018 in our little village when the old Anglican Church bell rang out to mark the hundredth anniversary of the end of the first world war.

I was there for the morning session but it was even colder when this sunset version was recorded and I stayed in a more comfortable place.  Even colder than it is now on January 3rd. It took a lot of work to put it all together so the weather could not stop it.

Posted by Ralph Goff at 7:13 AM No comments: