Judging by the declining number of hits on the old Mercury videos I may have "jumped the shark " on the Mercury subject. But here is another one anyway. I often brag about some of the long life battery service I get but here is some actual proof. The old flathead cranks over pretty good on a six volt battery that my uncle bought for his Case tractor back in the spring of 2002. 15 years is pretty darn good for any battery, be it automotive or agricultural.

I'm also showing off the new oil lines on the filter plus a new battery cable. Nothing fancy here. Just another in the ongoing series of improvements on the Merc. Just passed the two year mark since it first started and ran under it's own power. Its still no show car or an example of artistic workmanship. If you want to see some real innovative and skillful repairs just take a look at one of my favourite youtubers, coldwarmotors Its a true source of inspiration for anybody that enjoys working on old rusty iron.

The Old Porch is Gone

The old porch stood, detached from the main house, for just over 40 years. It had developed a serious lean over the years and the last few big wind storms were too much for it to stand anymore.
Originally built as the new house was constructed in 1920. It was very small but served the purpose of keeping the cold Northwest winds away from the kitchen door. It also served as a dog and cat house under the floor.
The old porch was retired and relocated in the summer of 1976 and a new, much bigger one was built to replace it. It served some purpose as a storage shelter and place to park things that we weren't quite ready to throw away yet.
Lots of memories in that little old building and it shows up in various photos over the years. 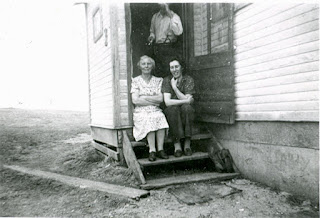 One of the earliest is this one from 1947 of my grandmother and Aunt Doris sitting on the steps. 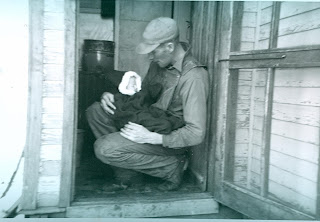 Me with my dad probably  the winter of 54. 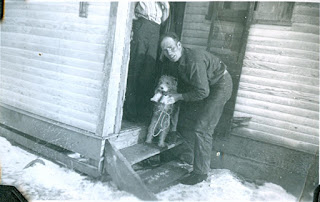 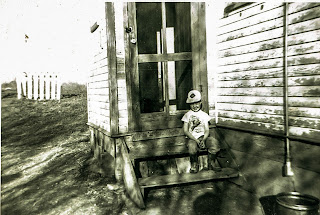 Little brother sitting on the steps squinting into the sunset about 1961. 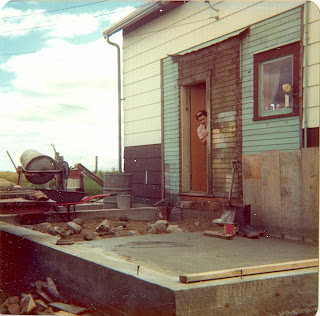 Summer of 76 the old porch was moved and we were well into laying the concrete for the new replacement. 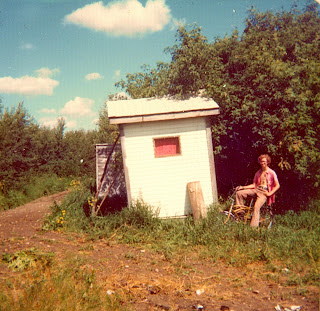 The old porch relocated to it's new home not far away near the maple hedge. 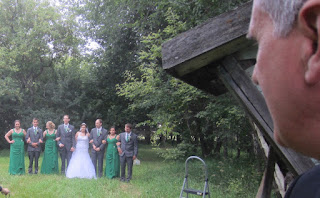 Just the edge of the roof showed up this wedding photo from 2014. Couple of weeks ago it was all done. Now the clean up.
Posted by Ralph Goff at 12:37 PM 4 comments:

Email ThisBlogThis!Share to TwitterShare to FacebookShare to Pinterest
Labels: Saskatchewan

New Oil Line For the Merc

I'd just about given up on ever getting this piece of brake line bent into shape. I intended it to be a replacement for the ancient and leaking rubber oil line to the filter on the 52 Merc. Hopefully I will have a new line for it some time next week but in the meantime I wanted to have it mobile. So I got a little creative bending done without damaging or crimping the line beyond use. It does not look original but at least it works and does not leak.

And what a difference it made tightening up that nut on the pinion of the differential. I guess it had been loose for years. The car had a real howl on deceleration due to the excess free play in the gears. Tightening up that nut eliminated that noise. A simple fix. Almost too good to be true.

Ok blogger, you have "improved" the site now to the point that I can't upload a photo like I used to.
Posted by Ralph Goff at 8:05 PM No comments:

Carragana trees make a good hedge and are fast growing. They also take a little maintenance as they tend to spread out and break down. I went to work with the chain saw recently and cleaned up all the dead growth along one side of the hedge. The quickest and easiest way to get rid of all the branches was to push them into a pile with the dozer blade on the old 730 Case tractor.

Something a little different, video of the drone monitor while flying . It was a little complicated driving the Merc while keeping the drone camera on target (moving) and recording it all on the chest mount Camkix Gopro. But it worked, and no unexpected incidents this time.

Like losing an old friend or putting a beloved pet to sleep. I hated to cut down this big old spruce tree my dad planted well over 30 years ago. But I'd been thinking for a while now that it needed to go. So close to the house that the branches were nearly touching. Plus the risk that the roots would grow into the cement walls of the cistern and cause it to leak water. And if the high winds were to blow that tree down on the house it would do some serious damage. So I went to work with the Massey as an anchor and the Poulan saw this afternoon and it was surprisingly easy. It came down exactly where I planned it and without damaging anything. A rough measurement I figured 40 feet tall. It was a heavy load but the old Massey pulled it away even across the still wet fields.
I'm not sure why I left a six foot high stump but I can always cut it down to ground level later. Not sure either what I will do with the tree but if nothing else, there is a whole lot of firewood in that trunk. 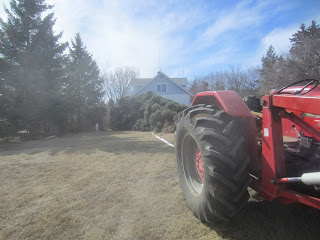 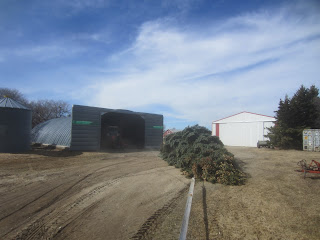 Just a few notes while I'm waiting for Windows movie maker to load some video to work on.
My cattle have suspicious minds. Any little thing they see me doing different, wearing different clothes, even talking to myself while shooting video, they are looking alert and considering their flight path for escape. So I was pretty fortunate to get at least two of the cows treated with ivermectin (ivomec?) without them even noticing. After the past winter's problems with magpies pecking holes in one of the yearling bull's back I thought I'd try this treatment. The theory is that the warble fly larvae work their way up through the body and make holes in the animal's skin thereby attracting magpies. Typical scavengers that they are, magpies will keep coming back for more and no matter how many I shoot there are always more to replace them.
It is a pretty simple process of measuring out the dose of liquid ivermectin(which will kill the fly larvae) by pouring the liquid along the animal's back.
I did it while they were eating up the chop I had just threw in the trough and they never even noticed. Two down, seven to go. Warm and sunny. Most of the snow gone. It is an early spring. 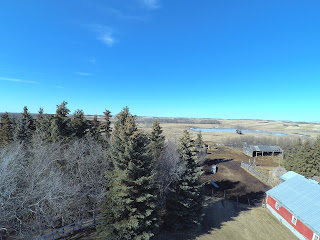