Going hands free with the Gopro camera. No , its not a commercial endorsement but I thought I'd post a video of my first test run trying it out. It is a chest mount harness that holds the camera steady and secure so I can video and still have two hands free for work.

Went out to feed the cows and discovered one cow missing. After a short walk into the pasture I spotted her with a new calf. In almost the same location as she had a calf almost exactly a year ago.

HydroAxe In The Hundred Acre Woods

I shot some drone video last week while watching the machinery at work cutting down the trees along the road on the North line of the hundred acre woods. And since drone video is silent I thought I'd add a little music. Recorded way back in the winter of 1955-56. My uncles and some neighbours making some music. I need to do some editing on the audio but for now, this will have to do.

How Did We Get To This Point?

I know I'm being non progressive and old fashioned but the thought of running my farm on a computer controlled  tractor is not something  I want to  do.  This recent news  story shows  just how crazy it can get when you can't  fix or  adjust anything  on your tractor because the computer software in it is still the intellectual property of the company that sold  it to you. This is not me
But for anybody efficient and  progressive enough that can't farm with 25 year old equipment, I guess this is the way it has to be.
On the other hand, I do accept new  technology in the form of drones :-) They are great for checking  out the fields and  crops from above. And things certainly do look different from up there. Learning to fly is an ongoing learning experience. For some unknown reason the gimbal quit "gimbaling" on mine while flying  this weekend. This is the mechanism that adjusts the camera lens up or down according to my commands. But it quit responding. After a rest and battery recharge, plus a little manual working of the gimbal, it seemed back to normal for the next flight. I was able to get some video without flying into the trees or driving the Merc into the ditch so it was a good day.

Its not often we see a combine on the road in March here in Sask. but I caught up to this one today. Probably on the way back from the dealer's Green light service or something.

In other news, our Hundred Acre Woods I often refer to, is getting a little smaller each day this week. The municipality has the theory that the trees along the road were shading too much and preventing the road from drying out. So the cutting machine is working away taking down a 30-40 foot strip of trees along the full mile. Personally I think its a waste of time and the tax payer's money but who are we to stand in the way of progress and better roads.

New Brake Hoses For The Merc

More messing about with the Mercury. The Rock Auto front brake hoses arrived in good time by mail and I had to try one on just to see if it fit. It did. I even went the extra mile and replaced the cracked up Michelin XW4 tire with a much better Cooper Discover tire from my used inventory. The car is getting safer all the time. That new back seat installation is kind of dragging. I've got it set in proper position but have yet to make brackets to bolt the seat down.

This first day of spring was not too inspiring to get out and work on it . That wind was wild again and the odd bit of snow mixed with it.

Recent changes to the rules for recreational drone users due to increased incidents of drone/airplane collisions. Or something like that. I guess it is no surprise that a few careless or irresponsible operators have caused problems and the rules had to be tightened up to affect us all. They say you can't fly within 9 km of an airport which is no problem for me being out in the middle of nowhere. I might see one plane a week fly over and usually well above drone flying altitude.
Rules also state we can't fly above 90 metres. (about 300 feet). I guess that is not a huge problem because for most photography that is more than high enough. But these things will actually fly up to over 2000 feet altitude so you might guess that some of us would have to test the limits.
And 245 feet is the limit to how close you can fly to a building. Again, it is good to live in the middle of nowhere. 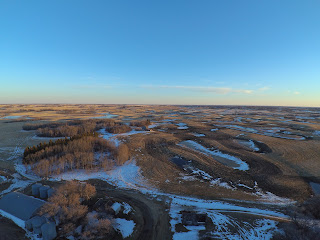 In other news, its warming up and the snow is melting. One of these days I might actually have to start working again. 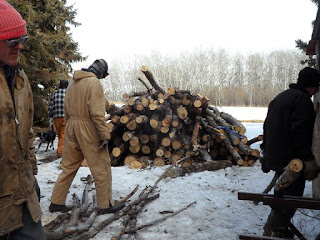 So why not move some more snow. And make a video of it. The wild, insane Northwest wind  put up a few hard drifts in places  that needed  to be cleared. The driveway was swept clean down to the sand and gravel.  Since then we have had nothing but strong South East winds. And cold. Today was the first day above freezing  for over a week.
That new  calf turned  out to be a heifer. I've let it and the cow out to join  the herd and they are getting along  good. All 8 of them. 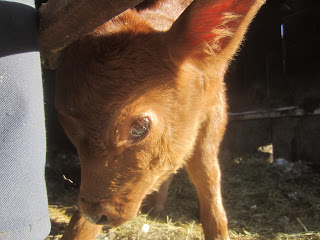 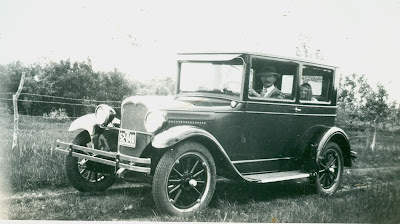 Thats my Dad's uncle Charlie (Karl) Hobetzeder in his new 1928 Chevy. Cousin Ivy in the back seat. It was a big step up from horse and democrat travelling the 12 miles to town. It would have been a big expense on a small farm but I'm guessing part or all of the money came from an inheritance from a relative in England.
"Aunt King" as she was referred to , Harriet King as her name appears in the will, (yes I have a copy of it). Quite interesting to read how the estate funds were divided up in various fractions to all the surviving relatives and descendents. I should look it up to get the actual numbers . Although it would be in British pounds which would not mean much to me.
Anyway, Charlie had good service out of the Chevy right up to the post war years when he replaced the tired old 28 with a 47 Chev. I think the old 28 was showing it's age by that time. It had survived at least one roll over with no major structural damage. In fact the story goes that they were able to get it back on it's wheels and continue the journey. Tough old car.
This photo shows Ivy and her dad beside the 28 Chev sometime during the war years. Can't quite read the license plate. 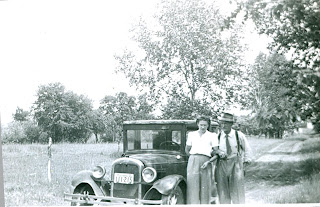 Working With The Cattle

I got really lucky this time. Got the calves I wanted to sell penned up and eventually hauled out without any problems. A slight complication when  cow decided to calve on the same day but it was really perfect timing. Since she was penned up in the shelter with the two to be sold I only had to separate them with some panels so I could keep her in. Lucky as the weather was about to change to snow and blowing snow. Not the kind of weather I want a new born calf to be out for. She might have been smart enough to bring it back to the shelter but you just never know with cattle.

Looks like I get to move some more snow before this winter is over.

More of me rambling on about the boring details of my life on  the farm. While multi tasking driving the tractor clearing up a bit of snow. I thought I was shooting some great overhead views with the drone while working but found out later I had not pushed the record button and missed the best shots. I did salvage a little from later segments to at least show some of the great outdoor scenery we had on the first as March came in like a lamb. (Old saying is that if March comes in like a lamb it will go out like a lion). Stay tuned.

March came in cool (-10F at sunrise)  but sunny and clear with no wind, a bit of fog and hoar frost. 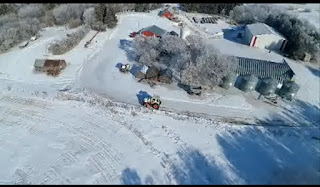 Great photo opps but I was busy getting ready to load cattle so I missed some. As it turned out there was a re-scheduling and I had to release the cattle that were slated to load. Hopefully in a few days it will happen. Its unfortunate because I got lucky and had them penned up with no stress or excitement. Its not always that easy. Hope its easy next time too.
I'd had the tractor plugged in ready to go for 36 hours so figured I might as well make some use of it. I cleared away the snow in the high traffic areas of the yard. Probably a waste of time as it supposed to warm up to above freezing by the weekend and maybe a  lot of that snow will just melt.
I thought I was shooting some great action video with the drone while I was moving snow but later found out I didn't. Just a bit of between the scenes video having actually missed what I really intended to shoot. Why can't somebody invent a screen (phone or tablet) that does not just appear black when out in the sunlight? I find them really hard to see and  lot of the time I'm just working by instinct and guess work, unless I can get into a shady spot.