Not on me but a few miles South there are fields that are devastated with close to hundred percent hail damage from Tuesday night's storm. Even the grass in the ditches is too flat to even cut for hay now. Heavy rain, winds, and hail stones broke a few windows, damaged siding on buildings. We dodged the bullet this time but maybe not the next one. We are just entering what used to be considered the high risk time for hail storms. As my grandmother used to refer to the "fateful eighth" of August when they had a major hail storm pass through and wipe out crops.
I took a few poor photos yesterday while driving by some of the damaged fields. 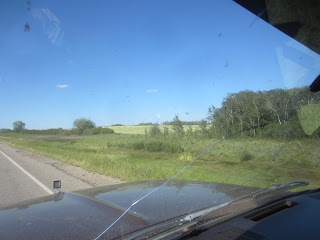 Looking through my cracked windshield at that light coloured field behind the trees shows the damage. It should still be green but is now dyng off due to hail damage. Hail adjusters will be busy.
Posted by Ralph Goff at 7:56 AM 1 comment:

Until it wasn't . I did get off to a good start raking and doubling up all the swaths. The inch and a quarter of rain the other day did not seem to hurt it too bad and it still has fair colour. Today was an ideal drying day with 80 degree temps and wind blowing.
Finished raking and back home for the baler (and very late dinner). There was some ominous looking clouds but way off to the North which were far away. 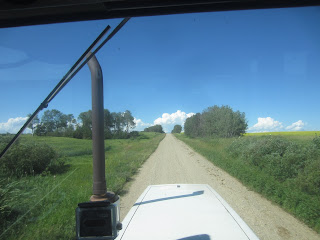 Got maybe half the baling done when it got a little too quiet behind me. Figured a shear pin had broke as I was turning but it was way worse than that. For some reason the middle u joint had broken . By some miracle the spinning pto shaft did not self destruct before I shut it down. The broken joint appears well greased and no noticeable wear.
Those are the worst kind of breakdowns. The ones that happen for no apparent reason.

Will I find new parts for a 40 some year old baler? Will I get it together and finish baling before the next rain hits? To be continued...

Finally got over to the flax field early enough today to take some pictures of it flowering. Seems to shut down in afternoon but it was in fine form this morning. With the neighbour's canola field of yellow in the background. 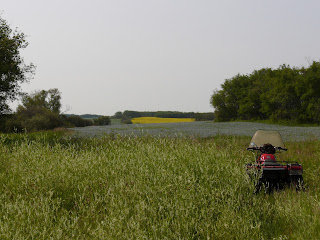 Still have not moved the poor excuse for last year's flax crop but here I am looking at a new crop's possibilities already. It always looks good at this stage before the weeds show up. And they are there. The herbicide did a great job, as evidenced by the "check strips" but the high moisture conditions have given us a whole new crop of weeds. Flax is a poor competitor with it's spindly stems and leaves. The flax is well ahead of the weeds for now but it will not look so nice when they grow tall above it. Still should be a good crop.The bloom is starting to fade a little on the canola now. Big pods forming.The hay cut on Friday is pretty well dry enough to bale right now except for the heavy parts of the field. No sooner did I think of hitching on  to the hay rake and the clouds rolled in. Spitting rain now. You just can't win with hay it seems. No matter. The cows will eat it this winter even if the quality is down a bit.Thunder rumbling so I better post this before the power cuts out and I lose it. The battery life on this backtop is measured in seconds now.
Posted by Ralph Goff at 12:37 PM No comments:

Or at least I think I do. Its a little piece of history retained on the driver's door post of the 52 Mercury. In those days when many owners did their own engine oil changes they would (usually) mark down the mileage and date on the sticker that came with the new oil filter. This one from Atlas filters is marked 1967, July something. That scrawled pencil hand writing is my own I think. 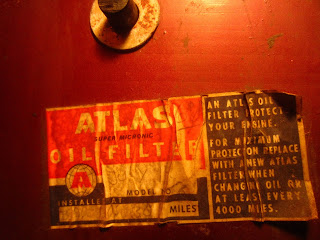 It looks like Dad was using BA (later Gulf oil) 10w-30 oil at that time. No mileage recorded so I'm guessing the speedometer had already quit working by that time.
Its been a week of threatening thunderstorms every day and yet not very much rain. So it keeps me on hold putting off hay cutting , etc. I did manage to get a couple of fields of chem fallow sprayed. They needed it. Flax hauling was scheduled but put off due to threat of rain. You really don't want rain when loading flax as it turns to glue and sticks to the inside of the truck box sides.
It was a very quiet evening with no wind and hardly a sound except the birds and the occasional distant whine of a plane or sprayer working on crops. They are going all out pouring on the fungicide or insecticide (or both) on canola and cereal crops now. 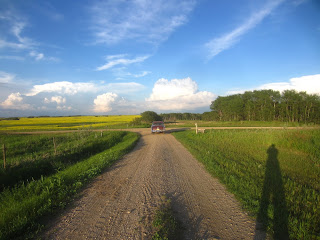 I did disturb the silence a bit with the rumble of the straight pipe on the Mercury flathead V8 for a short drive. Got to keep those valves exercised so they don't stick.

Posted by Ralph Goff at 9:10 PM No comments:

Although it was already two days ago, here is a photo of what has become sort of a Canada Day traditional gathering of friends and family. It was pretty cool, cloudy and windy so I passed on the actual trail ride.

Funny , with all the threatening weather we have had lately, in fact there has been hardly any measureable rain. Just light showers that keep everything going but make it very hard to make hay. I was lucky enough to get most of what I have cut baled up last week. So far holding off cutting any more as there are showers forecast almost every day this coming week.
Crops progressing nicely with canola blooming and wheat heading pretty much on schedule. I took these recent photos of wheat. Of course it was a good opportunity to exercise the 52 Merc. Can't let it sit too long and have the valves get stuck from inactivity. 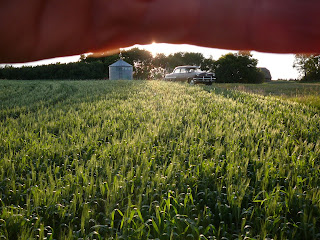 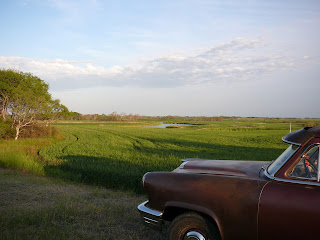