Out In The Woods On A Snowy Evening.


Ok, I sort of was inspired by the Robert Frost poem, Stopping by woods on a snowy evening" the other day when I shot some of this video. It looks nice but means lots of shoveling, staggering through deep snow and spinning wheels on tractors trying to carry hay bales out to the cattle feeders. I may yet have to install the snow blower this winter.
I can't believe my luck getting 3 semis loads of grain hauled out on Tuesday, just 24 hours before this new snow fell. There wasn't a lot of snow around that day but being mild it was very slippery and the big truck needed a pull at one point to get going. That farm is pretty much cleaned up now so I should not have to push any more snow there. But never say never.
Highways are reported to be a combination of frozen rain, packed snow and dangerous driving. My old 2 wheel drive pickup has summer tread tires and likely won't get past the doors of the garage before getting stuck. My 4 WD has developed a gas tank leak and I don't want to push my luck too far driving it but may have to at some point. At least I am not dealing with mud and flooding like Budde Shepherd so I will be thankful for that.
Posted by Ralph Goff at 7:27 AM 3 comments:

November On The Farm.


Some nice scenery here even though its winter. Hoar frost always does it. Milder than normal now and we are losing some of that snow. I pushed snow today to clear a path for the grain semi to haul out 3 loads of grain. So far it is looking like I was smart (lucky) to sell my canola at October price. Today's price is a dollar less per bushel. It makes no sense to me but the market is always right.
Posted by Ralph Goff at 9:45 PM No comments:

After our first taste of winter on the weekend we are getting a break the past day or so with sunshine and mild temperatures. Nearly up to the thawing point so the snow is settling. I didn't bother to start a tractor to move any, just drove through and made ruts with the 4x4. Another day or so and it might just melt. Maybe I really am the "lazy farmer".
Deer hunting season started up this week. I did a little deer hunting with the camera this afternooon on our wildlife land and saw several including a couple of well antlered Bucks that should make a good trophy for some hunter. Took this picture from over a quarter mile away across the valley on full zoom so it is a little grainy. 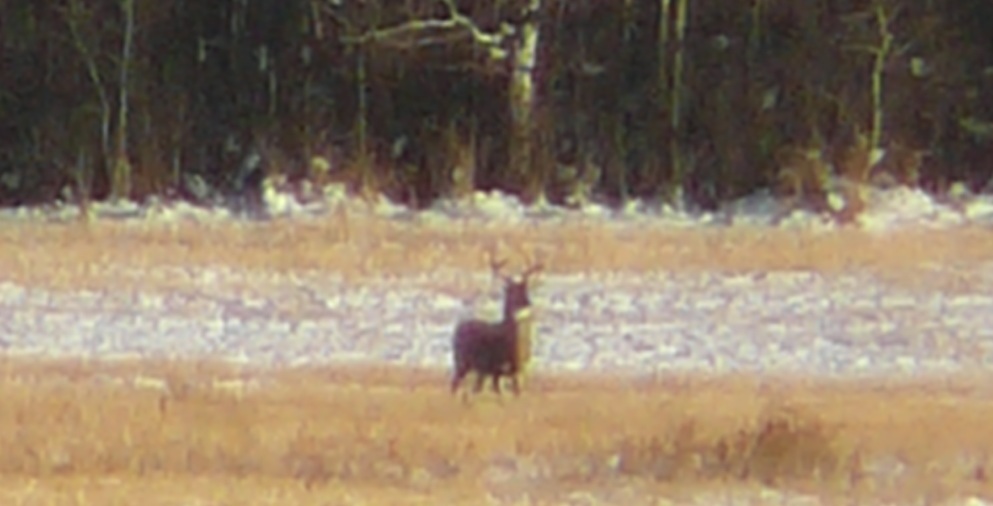 No News And Unknown Soldiers

No big news here, just snowed in from the heavy snowfall of the weekend. I've shoveled lots of snow and still lots to go. Eventually I will install the snowblower on the tractor and do some serious snow moving. I think I might be able to get out with the four wheel drive and snow tires but today I  have nowhere to go and all day to get there.
Been meaning to post this picture of  unknown soldiers that I have in my possesion.  Writing on the back says "Ant. Kuryk , Hatherleigh, Sask.". I'd never heard of Hatherleigh but according to google it still exists at least in name. Probably a rural post office in the old days.
Anybody care to guess the location of the photo? Canals of Venice? Is that a volcano in the background? 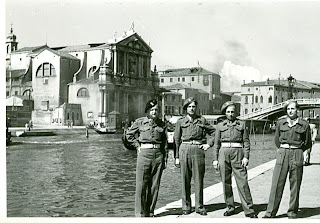 Email ThisBlogThis!Share to TwitterShare to FacebookShare to Pinterest
Labels: Hatherleigh, Sask. A. Kuryk

Cattle In The Snow

The cattle don't like it any better than I do but this is the first significant snowfall of the winter on November 9. Wind chill is entering the weather forecast now. Hope I can find the snow shovel tomorrow. I'll need it to keep warm according to the forecasters.
Posted by Ralph Goff at 10:10 PM 1 comment:

Now Is It Winter?

You wouldn't think it to look at the bare ground but temperatures are more winter like than usual for November 1. It rarely gets above freezing by day time and I am thinking I may not do any more field work, even rock picking or gravel hauling.
Cattle and cats are acting really hungry. The cattle can still eat some of the grass they turned up their noses at back in the summer but the cats seem to have exhausted the supply of mice on the farm and are relying on cat chow and baked potatoes twice a day.
I'm still trying to emulate the " Lazy Farmer" and sit and sleep by the fire. But I have no fire and feel a little too lazy if I sit around for long.
So today I worked at clearing up dead wood in the maple hedge. Also tightening the wheel spline on the old Cockshutt 40 tractor. The transmission and final drives of these tractors are legendary in tractor puller fame but they do occasionally need a little maintenance. The photo shows it takes a fair bit of leverage . 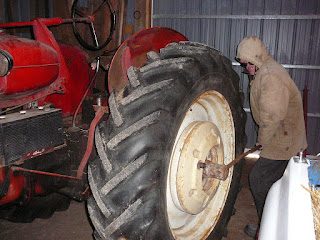