By The Dawn's Early Light 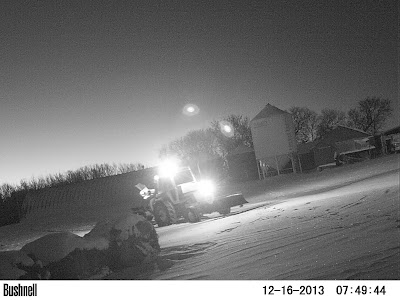 Its not often you will see me out and about before the sun in December but the trail cam caught me this time. Flax hauling day and I needed to get over to the Hundred Acre Woods early with the tractor and grain vac plus get the snow all cleared for the semis to get around. It worked well. The mildest day in quite a while made it good working and had all the flax out by noon. Flax price had dropped about $3 a bushel since I priced this lot in November so I got lucky this time. Not so with the other grains.
Posted by Ralph Goff at 10:10 PM 1 comment:

Heard on the news a while back that the White tail deer population in Sask. was down and hunters were having a hard time getting their deer. Complaints were made that the DNR should not have issued so many deer tags. Maybe, but I see no evidence of a shortage locally. Tracks through my yard all the time and trail cam images catch up to 6 deer per frame sometimes. I don't see as many bucks, mostly does and young. This image from my yard one October night shows one laying down to relax while two others graze on grass and grain cleaned off the harvest machinery. I guess I should be a deer hunter. 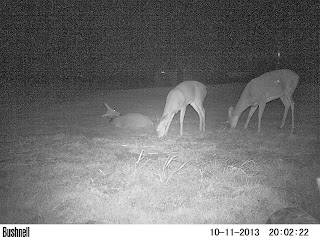 Dear Dick: Just a few lines hoping this finds you all in the best of health. I was very glad to hear from you. Hows everyone getting along? You must have had a mild winter. Well we are having some pretty good weather over here at times but it sure gets chilly at nights. Them open fire places ain't much for heat. Do you ever hear much from Bud? I haven't seen anything of him or Phil Fisher? Of course you never know when you are gonna run into someone from home. Most of the boys in the 18th are from Sask., Regina, Indian Head, Cupar, Grenfell. A good bunch of guys.

Well we travel around quite a bit on schemes. Sometimes we move to different billets. We are living in houses right now. We are on the outskirts of a small village. Two picture shows a week, a dance hall, two pubs and canteen. Some place eh? Well I don't bother much about dances. They also have a snooker table so we have a pretty good time but we were out on a scheme yesterday about ten o'clock and a thunder storm came up so it wasn't so good pushing a gun through mud and water to our positions. But we have quite a bit of fun out of them even if it takes a couple of days to get the gun cleaned and equipment. Me and a few of the boys were on the coast for a week. It was quite a change. I thought Canada was cold but that place was plenty breezy. We were on duty for twenty four hours and then off twenty four.

Have you seen much of Sandy?. I hear from him quite often. Some guy eh?. What do you think of this war? I could hear the bombing the time them battle ships left Brest and every now and then we hear firing in that direction. Welll guess I"ll have to sign off. Hoping to hear from you soon and wishing all the best of luck and health. I guess it'll be pretty well summer by the time this reaches you. Remember me to all.

As ever, a friend, 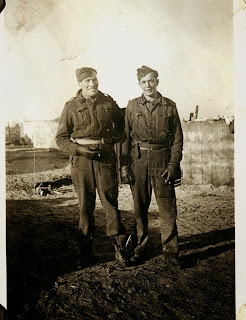 Posted by Ralph Goff at 1:35 PM No comments:

Nothing too exciting here. I happened to be watching an episode of Wartime Farm recently. An excellent depiction of life on a farm during WWII in England. The term  airgraph came up and it seemed familiar to me. Sure enough, after searching through some of the "museum" I found a couple that were sent from Wimborne, Dorset, England to Saskatchewan to my dad's cousins in 1944. Airgraphs were a means of compacting mail during the war when transportation was difficult at times. The letters were photographed on microfilm which was much smaller and easier to transport and mail. Then re-printed into a letter at some point. Here are a couple of scans of mine. 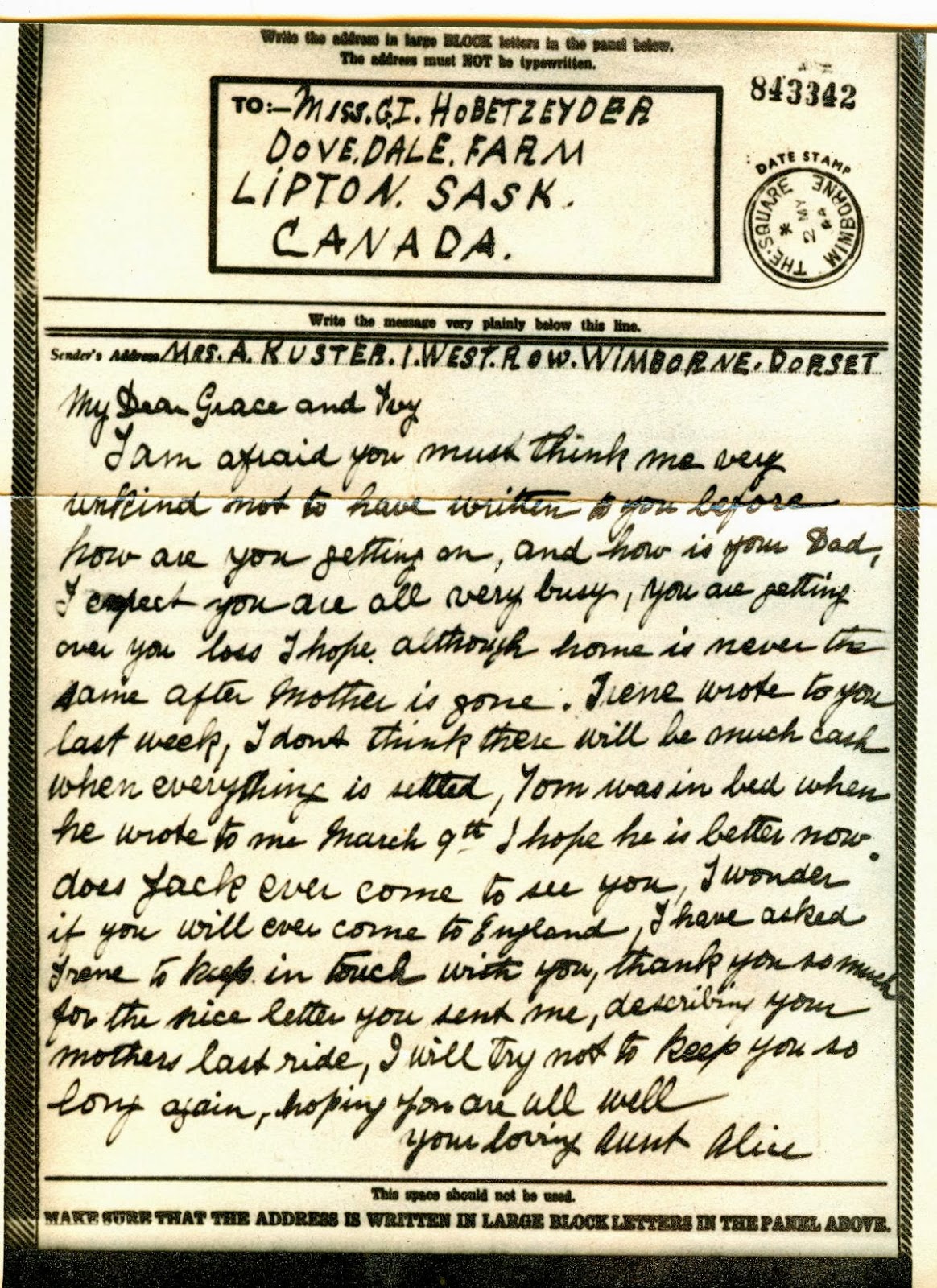 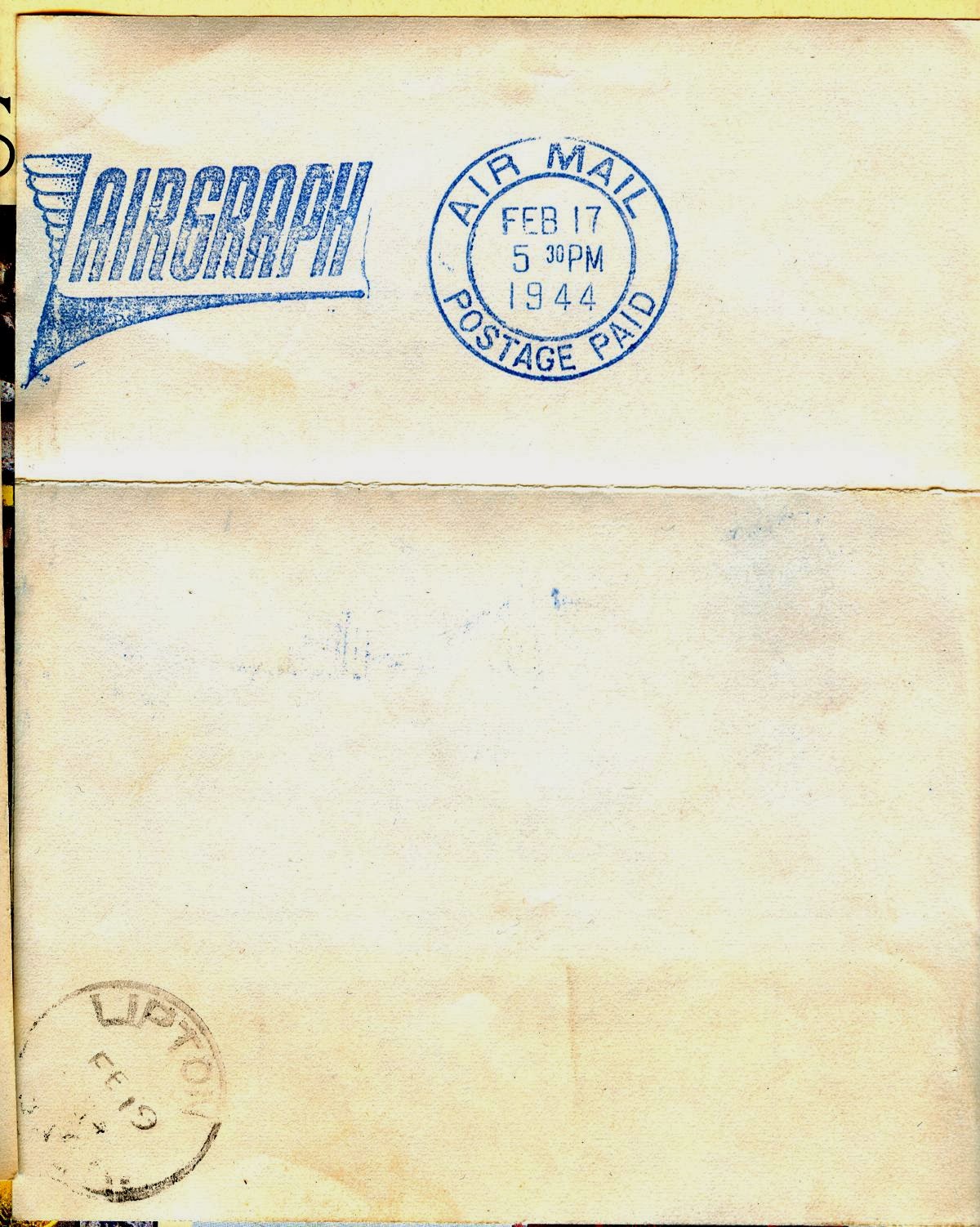 William Wardill  is an interesting writer who has a column in various newspapers in Sask. Quite interesting to read. This guy should be blogging. ..