I got lucky with the first calf of the year. It was born in the cattle shelter sometime early this morning. Lucky the cow had enough sense to do it there rather than far out in the field in the bushes where it would be in the snow and cold wind. I had to drag a bunch of steel panels into place to partition off part of the shelter for her and the new calf so the rest of the herd wouldn't interfere with the bonding process. It took a bit of patience and ingenuity to drag the calf in there while the cow was occupied eating hay at the feeder. Soon as she saw it in the enclosure she came right in and I was able to fence them in with no trouble. Lucky for me she was not the excitable or aggressive type of mother. Even the rest of the herd was unconcerned and I literally had to push them out of the way at times.
The temp was in the teens (above zero) but a nasty Northwester blowing so they were much better off in the old shelter. Even so the calf looked to be shivering and had no clue where it's sustenance was located as it laid down to rest in the straw. I left them for a few hours but finally went to town to get some of the dry colostrum mix that new calves need in the first few hours of their life. Shocking price on that at $50 for two packages which make 5 cups of liquid for the calf.
So I was pretty happy to see the calf had figured it out by the time I got home and the cow was standing very co-operative too.
I just came in from a late night check for water and  hay and all appears well. 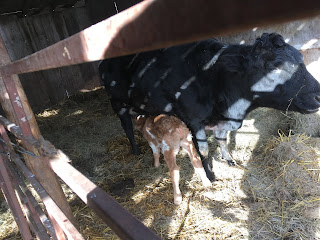