End Of The Year

Only 11 hours left in 2018 so this will likely be my last post of the year. It is a nice sunny day with no wind. At least not here in my tree sheltered yard. Temp has warmed up to -15F so it is headed the right way. The cattle are actually standing out in the pasture soaking up the sun as it is warm. I guess when you fill up on hay and chopped oats it keeps a lot of cold out.
I'm posting a link to a video I just found. A fellow old car guy on youtube put it up and it is a fascinating account of some behind the scenes stuff that went on in England during WWII. As told by his father who was there. Definitely worth a look.

This might be my last youtube video for 2018. I had it in mind to do a year end review of sorts but so far it has not got past the idea stage. And time is running out. I took advantage of the relatively mild (+20F) temps to do a little work on the 53 Merc parts car. The gas tank has been badly dented on the bottom from I don't know what. Maybe a rock? Or somebody tried to move the car with a fork lift? Anyway, its off and I'll see if it is possible (or worth the trouble) to try and straighten. At least now I can get at the trunk floor to beat the dents out.

Winter continues to have below normal snow and mostly above normal temps which helps.

Cattle are having it easy, still able to forage a bit in the pasture and field although they get plenty to eat at the feeders. I've put out over 20 hay bales for them since starting feeding in November. The deer seem to like the oat bales judging by all the tracks around them. So I better start feeding the oat bales to the cows before the deer decide to eat them. 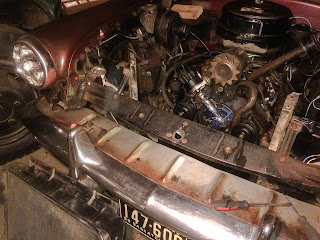 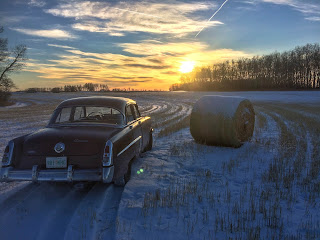 I Am A Selfish Braggart

At least according to a "troll" on youtube. And it might be at least a little bit true. But no more so than the average video poster  who puts their content on youtube. I know we shouldn't feed the trolls but I couldn't resist making a couple of replies before deciding this guy was just in it for the argument and life is too short to argue against a closed mind.
It was on the "Mail From Coldwarmotors" video and that one has turned out to be more popular than my average videos having over double the usual views. If my channel was actually monetized it would mean extra money for me but I'm not making a cent from youtube. Partly because I have refused to jump through all the hoops that youtube requires before they will pay anything. Plus I really hate having to look at ads on other's channels so am reluctant to become one of those annoying channels.
So I'm just in it for fun and the favourable comments that 99.9% of the viewers have given so far. Old Roosty6 will continue to crow on youtube for a while yet.