We needed it and at last it came. Cold enough that some was snow and then layered everything up in ice. Devastation on a lot of the big old trees as the weight broke off a lot of branches.

I think it has rained at least a bit each of the last five days.

Can hardly believe my air seeder has been parked for a week now. I like to be done with wheat and canola by May 24 but at this point I still have a couple of hundred acres canola to plant. Lucky to get the first field done a week ago and now hoping it is not yet out of the ground as there is frost predicted for tonight. Tiny canola plants do not handle frost well so I'm glad mine is a little late.

Early potatoes are up and survived the freezing rain fine.

I know I should not complain about the high prices we are getting for our canola lately but I do have one small one. Cargill left 8 tonnes of my canola sitting in the terminal unpriced for a week. The price was dropping every day. I had left a message to sell the day it was trucked in but apparently that message went missing. By the time I phoned almost a week later it had lost well over $1000. Thanks Cargill.. I'll remember this next time I'm considering who to sell my grain to. And lets not even talk about the excess ($202) drying charges they tacked onto my wheat when one load was half a percentage point above dry.

Its rainy, windy and cold again this morning but the grass is growing and the cows are not complaining. And neither am I. 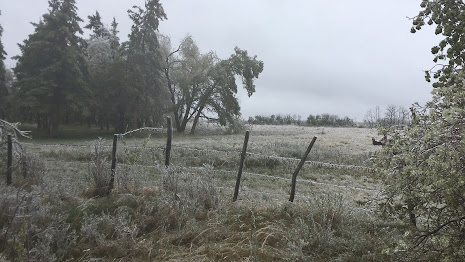