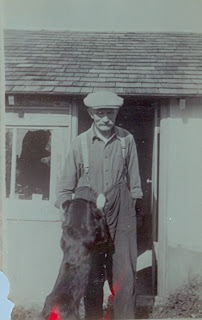 Homesteader's Letter
This letter was written by A.W. Nevard to his brother Horace who was working for a farmer at Indian Head , Sask.
for the summer. A.W. was back at the homestead taking care of the farm. It gives some idea of the hardships and
obstacles faced by the early homesteaders that came to this country from England.

Headlands P.O.
Summer, 1908
Dear Horace
I thought I would write to you as Mary is writing to Earn. We have put 29 loads in a stack of hay at the back of the stable
and Mr. McNeil I expect has cut the hay on his own place so I am going to team on there on Monday and then he will
move over and cut about 10 more loads on our section.
There were 12 cows and 4 calves on my oats on Wednesday afternoon so I got Mr. McNeil to help me and we fetched
them over here and put them in the pasture field and while I was gone the blamed things broke out and went in the oats
and Mary sent them down the bottom and they went in the barley.
Between the cattle and gophers we won't get much barley and between the gophers and cattle and oxen I won't have many
oats on my place.
I went over to see the Jew and charged him $10 for my own time and Mr. McNeils and damages to the grain so he will work
for me with a team for 2 days.
If you have not written about that homestead you had better get a move on and write as it is over now about 9 days and you
want to come up and enterprise as soon as possible so you are not doing that when you might be out harvesting as I would
like you to be here from Sat. to Monday night so you could help me put that roof on the house as I have got the roof lumber.
You might fetch me a pair of work boots when you come , like the picture if you can get them or something like them.
Size 11. You can get them at Chisolms near the P.O. in Indian Head.
There is no one on that quarter so Brown has no right to it now and if you do not get it we shall have a blame Jew on it and have
about 20 head of cattle running in our crop I expect. So get a move on. I will pay you for the boots out of the first money I get......
Posted by Ralph Goff at 2:31 PM