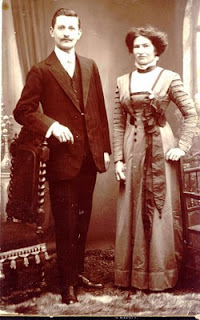 Charles and Kate. Or to be precise, Karl Hobeteder and Kathleen Mary Goff.
This studio portrait of them was taken in England sometime after they met and before they came to Canada.
Kate had worked as a domestic and parlour maid in various hotels and resorts along the south coast of England in the 1890s and early 1900s.
Karl , originally from Austria also worked in the service industry in hotels and resorts and this is likely where they met.
In 1910 Kate travelled to Canada to visit her brothers, Tom and Alf Goff who had taken up homesteads in the new province of Saskatchewan. Karl travelled with her and they arrived in July. They had plans of travelling on further to B.C. but ended up staying with Tom on his homestead and were married in December of 1910.
Karl and Kate took on a farm of their own less than a mile from her brothers and never did get to B.C. It was a hard life and I don't think they ever again could afford such nice clothes as in the above picture. Kate died in 1943, ten years before I was born. "Uncle Charlie" lived on until 1963 on the same farm with the assistance of his 2 daughters, Grace and Ivy.
Posted by Ralph Goff at 9:42 AM