Yes, sometimes there are beneficial side effects to this waste of time called blogging. One of my blog postings way back a while was  called Charles and Kate along with a nice studio portrait they had taken of themselves back in England before they came to Canada in 1910. Seeing as Charles had the unique name of "Hobetzeder" I used it as one of the labels or search tags thinking it might bring some interesting feedback. Sure enough I eventually had a couple of contacts from people who were distant relatives of Charles (and me) and wanted to share a little more information about the family history. Finally someone to share this wealth of old photos and letters I have accumulated over the years.
Charles , or Karl as he was known in his homeland of Austria received and saved many postcards and letters in the 1920s from old friends and family back in Austria. Of course all written in german and I could not read much more than "leiber Karl".
Now I am busily scanning the old letters , photos and postcards to send back to the fellow in Austria who contacted me initially. He translates them into english for me, lucky he is fluent in both german and english.
This postcard from 1907 shows Karl (middle row, second from the left) standing beside his friend Sebastian who sent many of the letters and postcards. 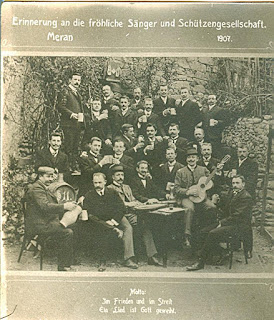 Translation of the text on the back..........
"I hope you are fine, healthy and contented with your life. In my life nothing has changed, it's always the same.


Some better news from home, at least my sister is a bit better. I fear mother won’t ever recover her health again.
A sad thing, but that’s life.
Best wishes from all who are familiar with you.

Have you got the specialist journal, I've sent? – Please write back very soon. Greetings from my grandmum.
She hasn’t sent back my photo of you either. Elias wrote a letter to you.
Best wishes to you.
Your faithful friend