plus a few other things made for a busy day. I was reluctant to cut any more hay seeing as rain is forecast and I don't want it to get soaked. But some that I cut the other day looked almost dry enough to bale so I figured get it done before the weather changed.
The Cockshutt 40, usually so reliable, failed to start. The 15 (or so) year old battery seemed too weak.So the next best candidate was the Cockshutt 50 beside it. Weak governor action, armstrong steering and a weak pto clutch but it got the job done. Made a few more good quality square hay bales to re-stock the hay loft for next winter. 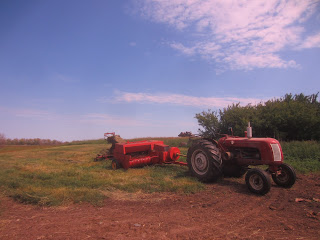 Had to do an inventory check on the spring harvested flax before making arrangements to sell it. Between it being low bushel weight and high (12%) dockage it is not going to be a big money crop.
I took this photo  while on top of the flax bin as the canola is starting to bloom pretty good right now. 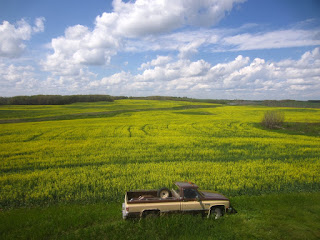 Did a little hay raking with the Super 90 Massey late in the afternoon. Hoping by turning the swaths they might just be dry enough to bale tomorrow. Some of it had only been cut down for 24 hours so there is still some drying needed before it is safe to bale. Hopefully, weather permitting, I will get it done tomorrow before rain moves in.