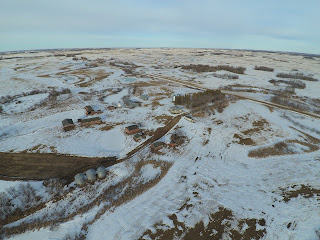 Not that we had a lot to begin with but these 40 degree days are slowly taking the snow away. Its nice working conditions but not normal for this time of year and makes you wonder if it is going to stay this "hot and dry" for the rest of the year. That could be trouble for growing crops but on the positive side, it will dry up some of the many flooded acres that have been growing nothing but bulrushes for the past 7 years or so.
We have had practically no hoar frost and fog this winter. The old saying was that you expect precipitation 90 days from when you see the frost and fog. If its true we can't expect much for the next 90 days or so.
Too wet and muddy to take the Merc out for a spin now but last weekend I took a drive and did a fly-along video  with the drone which worked pretty well. I only forgot to hit the record switch once.
My latest complaint is "Chinese Junk". Not the old sailing ships but the machine parts that used to be quality American built parts but are now made in China and sometimes of questionable quality. One of the made in China gearboxes on the big grain auger was leaking oil so bad after only 2 and a half harvests that I removed it only to find bad news. It appears that whoever assembled it at the factory did not have a snap ring properly in place and that allowed a bearing to slip out of alignment and the shaft to flop around so much it damaged the seal and the gear. Pretty disgusting on a $300 gear box. I can patch it up with a new seal but don't like the idea of having it fail in the middle of unloading an expensive load of granular fertilizer here this spring.
Income tax figures all tallied up and calculated this week. The only thing more amazing than how much money I made is how much I spent!. As farmers we sure do contribute to the economy.
Not that I'm complaining.