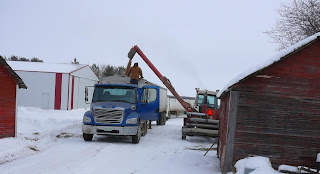 I took this picture a couple of weeks ago when I had the trucks come in to haul out my wheat contract. Those two big semis moved over 4000 bushels down the road in 4 loads in a short day. Everything worked just the way its supposed to and even the weather co-operated. I was glad to see that tough grain moved as it is always risky storing grain at high moisture. Some of this tested as high as 17% which is 2.5% above dry. Thanks to our extreme cold winter weather we can get away with holding that grain through the winter without spoilage, usually.
Interesting to review the settlement tickets though. Our Canadian wheat board advertises a price of $4.67 per bushel for that #1 low protein. Sounds pretty good at first but looking a little closer we see that the terminal wants 38 cents a bushel for elevation. Another 15 cents a bushel for cleaning ( I suppose they give the screenings away?). Then the CWB charges 78 cents a bushel to move that grain to its final destination. Not done yet there is another 22 cents deduction for "FAF", not sure what that is. And being that it is tough (damp) grain the terminal charges 11 cents a bushel for drying. Just to confuse you further, the terminal pays me 15 cents a bushel to help offset the trucking charges so that puts my net at $3.18 per bushel.
Based on what the wheat board finally sells the grain for, we will receive a final payment next December/January but its anybody's guess at this point how much or how little it will be.
Just as a point of interest, that $3.03 will not buy a gallon of car gas today but it might just about cover a gallon of farm diesel fuel. I haven't bought any lately.
In my early days of farming (1971) wheat was being bartered off for $1 a bushel as there was a glut of wheat on the market. That bushel of wheat would buy 4 gallons of farm fuel at that time.
Just something to think about as I am trying to decide what to plant this spring.
Posted by Ralph Goff at 12:31 PM