No, not fencing with swords but pliers, crowbar and sledge hammer. With receding water levels some of the fence that runs through sloughs is starting to re-appear. Or rather, the lack of fence. It has mostly disappeared under the water and willow growth and its a bit of a miracle the cattle did not find their way out of the pasture . Pretty much impossible to get out there to rebuild until the water freezes over as it has now. I was able to chain saw the dead growth away, string out some "new" wire and punch holes in the ice for a few fence posts. Needs the extra long ones because there is still close to 3 feet of water under the ice in places so the posts don't stick up very far once I hammer them down with the big sledge.
That second  hand barbed wire was a bit of a nightmare to untangle and string out but I got it done. There was no wind and it was plenty warm working with temps in the high 30s but still better than summer when there are mosquitos, wood ticks and real hot weather to work in.
And in other news, there are changes coming to the hundred acre woods. I took a drive through there today to shoot some video of whats new there. 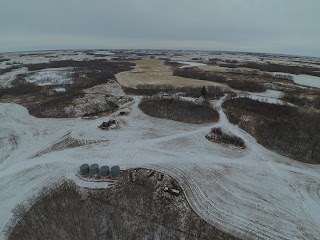