No, I don't have a problem with rabbits but listening to the interviews and comments on the radio this morning did make me a little angry. Apparently jack rabbits are moving into the city and damaging people's trees. So opinions are divided as to whether it is best to trap and destroy or just live with it and wrap the trees. I would not complain if they wanted to release a few here as I have not seen a jack rabbit in a long time. We do have a few "bush rabbits" but the jacks seem to be at the low point in their population cycle.
What really annoyed me was a few comments stating that the jack rabbits have been wiped out in the country by "farmers" spraying pesticides on the fields. What a stupid comment. Farmers have been spraying their crops for longer than I have been around and we used to have plenty of jack rabbits. It was not uncommon to see road kill after they became mesmerized by vehicle lights at night and would do their broken field run down the road ahead of the vehicle sometimes resulting in their demise.
But it is the typical type of comment I hear more and more as the general population becomes ever further removed from their farming roots. All they hear are the extreme groups shouting about our pesticide laden grains and terrible gmo products. Not to forget the antibiotic laden beef and chicken we produce. In case you missed it the last paragraph was sarcasm. Our food is safe. If I didn't believe it I wouldn't be eating it.
Its been a long cold winter and I guess my tolerance for b.s. is dropping as time passes. There are far bigger concerns out there than this "first world problem". 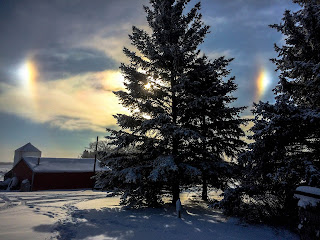 Scenic but its the kind of day I really appreciate the protection of my trees.