Are We Really Better than Animals?

I have to wonder after listening to and watching the disgusting display of post game riots following last night's Stanley Cup hockey game in Vancouver. Not a big sports fan here but in the tractor all day with the radio going its impossible not to hear whats happening. The news went to live coverage of the riots in the streets after Canada lost to Boston. Burning police cars and smashing store windows , then looting and destroying the business.
As is often the case, alcohol fueled most of the event even though liqour stores were closed in the hours before the game started. It didn't help apparently.
Plenty of injuries, tear gas and rubber bullets by the time the streets eventually cleared. Now for the clean up. Vancouver has earned a lot of world wide publicity over this event but not the kind they would like I'm sure.
Post-game insanity
I had to stop watching eventually . Seeing the smiling grinning faces of the hooligans as they destroyed property and taunted the police was just too much to take. This was animal behaviour and they need to be treated as such. Plenty of pictures and videos were taken of the event so hopefully the perpetrators will be harshly dealt with.
In other news, long days in the field are slowly getting me caught up with work. Flowers are blooming and crops are growing. Weeds too so I am hoping to spray a few acres today before the rain hits tomorrow. 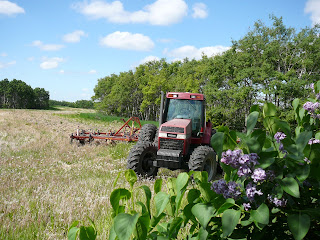 Email ThisBlogThis!Share to TwitterShare to FacebookShare to Pinterest
Labels: Case-IH 7130